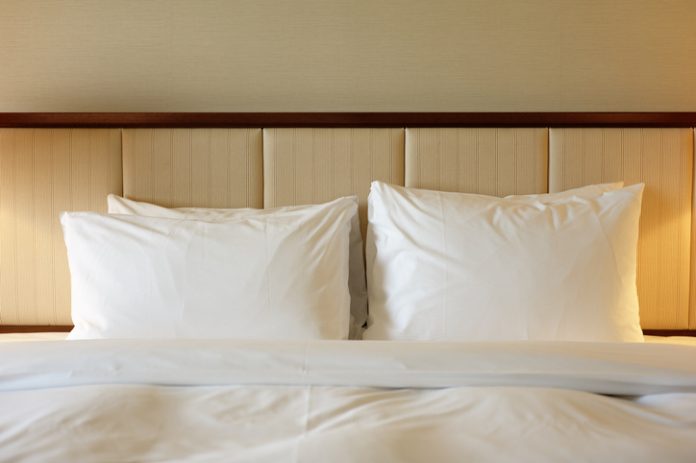 Richard Ferrell, founder and president of Pürlin, LLC, wasn’t especially tuned into water issues when he lived in Florida. It wasn’t until the longtime hotelier was in California during a severe drought that he became aware of the critical need to conserve this natural resource. “Because I felt the need to do something for the environment, I sold the company I built to my partners to use my hospitality industry experience to do something good for the planet,” he recounts. Ferrell describes how and why he created his Pürlin Laundry-Free Linens, which enable businesses with communal laundry—primarily healthcare and hospitality—to provide guests and patients with safe, clean, unused linens while also protecting the environment.

While gathering research on the challenge of water conservation, Ferrell recalls attending a National Geographic conference. “I was struck by a slide showing a queen-sized bedsheet. The question beneath it was, ‘How many gallons of water does it take to make one queen size bed sheet?’ And the answer was a whopping 2,800 gallons.”

Ferrell knew bed linen was generally 60 percent cotton and 40 percent polyester, and that growing the cotton and cleaning the sheets and pillowcases made from it not only used enormous amounts of water, it also required using a whole host of toxic chemicals to protect crops from disease and animals, and still other harsh treatments to sanitize the resulting linens Further, the annual cost of replacing linens had risen in recent decades—from 10 to 15 percent to 25 to 35 percent, he observes, noting that this is partly due to theft and resistant stains.

He mentions, too, the ‘Catch-22’ involved in providing the hypoallergenic bedding for the growing number of health-conscious guests who request it: “That requires laundering with treatments that may not remove the ‘evidence’ that linens have been used by others.”

In his quest for a solution, Ferrell says he was looking for a product that could simulate cotton but also save water and avoid the use of toxic chemicals. Polyester, which has been vastly improved in recent years, was an obvious choice. For the basic fibers, they used the now long proven- safe material originally developed for diapers. The result, he says, was soft, comfortable, unblemished linen that was also hypoallergenic. “They’re melted at over 510 degrees, after which a brand-new sheet is created.”

Ferrell explains how his system can be easily incorporated into traditional hotel operations. “After the beds are stripped, the bed linens are placed in bags and collected by our PolyPro partners. The fabric is melted into a liquid, and the fibers can be re-extruded back into a fabric again, yielding a product that is hypoallergenic, super soft, and white— one that has never been slept on before.”

To provide a sense of how much water is saved, Ferrell says a typical 300-room hotel uses 1-1.3 million gallons of water a year washing just sheets and pillowcases.

Ferrell says, when those true costs are factored in, the cost of his system is equal to or lower than what hoteliers are already spending, while also benefiting the planet, including, as he explains, marine life. “The linens created use a non-woven technology, so there are no microfiber threads to leach out of the material and into the waste stream.”

Ferrell stresses that the linens, which can be used for up to two weeks, are 100 percent recyclable, not disposable, and they are strictly for communal—not residential— laundry, like hospitals, hotels, cruise ships, and in the military. The product is being tested and used in three markets now—Key West, San Antonio, and Los Angeles.

“We expect this to revolutionize the industry in laundry because eventually guests will demand it; they will refuse to go to a hotel, hospital, or cruise ship that has sheets that someone else has slept on.”