Scott Gerber, principal and CEO of the Gerber Group, has done something many thought was impossible: He got New Yorkers excited about going to the airport.

Gerber helped to turn JFK Airport into a destination for tourists and locals alike, with its three vintage-inspired venues attached to the buzzy new TWA Hotel.

The Gerber Group built the plush red Sunken Lounge within the restored TWA Flight Center as the hotel’s main bar. It looks out onto a second bar, which is nestled inside the cabin of a repurposed plane from the 1950s that’s parked on the tarmac. Finally, the pool bar sits up on the roof, where guests or day-pass holders can soak in the infinity pool and take in sweeping views across the busy runway and down rows of jets resting at the next terminal.

“Not many people would think about having a rooftop pool that overlooks a runway at JFK. That’s really out there,” Gerber comments, noting, too, the scarcity of bars with runway views at airports. However, he claims, these features have proven popular. “There are tons of people who love watching planes take off and land. They don’t mind the noise. They love sitting in the pool. Some of these people are staying in the hotel, but others live in New York and come just to hang out there. That’s been unbelievable.” 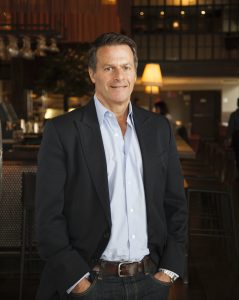 While a rooftop bar might be out of the box for some, it’s right in Gerber’s wheelhouse. Gerber’s other bars pack a similar punch, from the glass elevator that carries guests to Whiskey Blue atop the W in Atlanta, to the Lower East Side views that made Mr. Purple a popular destination among Manhattan’s trendy crowds.

That hip allure has been a signature, going back to the Gerber Group’s first venue, The Whiskey, at the Paramount Hotel, in 1991.

“At the time, my brother and I said, ‘Yeah, sounds like it’ll be a fun idea. Let’s open a bar!” Gerber says. “We realized that a bar in a hotel could be a cool bar. Going back in history, bars in hotels were just kind of there; nobody was going to them unless they just really needed a drink and were already staying in the hotel. All of the sudden, we were creating these great places people wanted to go to, these bars in hotels, even if they lived in that city. There were locals going to them, and we just kept building our business around that.”

Gerber’s bars clearly stand out, and that’s by design. With so many great boutique hotels out there with excellent amenities and great sheets and showers, it’s getting harder to differentiate between them and attract guests. But hotel bars and restaurants can play a major role in helping a property stand out. F&B can even create significant demand by offering hotel guests perks like VIP access or limited table reservations.

For Gerber, the best part is creating a deep and rich guest experiences that can’t be duplicated. “I love when I walk into one of our places and I see our guests happy to be there and appreciative of what we’ve done,” he says. “In this day and age—with everybody being on their phones and computers and all that kind of stuff—it’s nice to see people talking to each other and paying attention to each other. You’re not going to be able to get these experiences online. You’re not going to have as much fun sitting in your house having a glass of wine and watching television as you are being out and socializing with people.”

Even the prospect of fighting some pretty serious rush-hour traffic on the Belt Parkway to get to New York’s JFK Airport is not stopping people from going out to experience Gerber’s TWA venues firsthand.

“You’re not going to be able to shop for the experience you’re going to have in one of our places or any great restaurant and bar online,” he says. “I think we’re going to be OK. With the retail business so bad, there was a time where most landlords didn’t want food and beverage tenants. Now, we’re the most popular kid on the block. Everybody wants us because you can’t buy us online.”