Home People Checking In Stepping Up at a Historic Time: Tony Capuano on Fortifying Company Culture 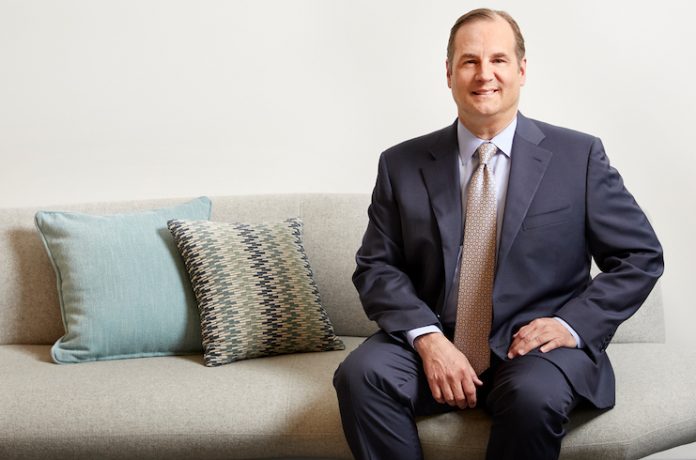 In February, Marriott International’s Anthony Capuano, then group president, global development, design, and operations services, became the second non-Marriott family member to be named CEO following the death of the first, legendary hospitality leader Arne Sorenson. Capuano, a Cornell School of Hotel Administration graduate who has been with Marriott since 1995, shared with LODGING the career path that led to this moment during a historic time for the world as well as the company, and his vision for the future. The approach he describes is to advance an existing strategy: “one that is laser-focused on recovery, expansion, providing opportunities for our associates, maintaining constructive relationships with our owners and franchisees, delivering safe and innovative experiences for our guests and customers, and building value for our shareholders.”

Capuano started working in hospitality at a level from which he says “dishwasher would have been a promotion.” However, he aspired to becoming a fighter pilot, and when those dreams were dashed—he explains he received a congressional nomination to the Naval Academy, but failed the vision test—he considered pursuing hospitality seriously. On the advice of a family friend, he applied and interviewed at Cornell. “During my visit to the campus, I met a bunch of professors and just fell in love with the school,” he recalls.

Upon graduation, Capuano received multiple job offers; his only rejection letter—which he still carries 34 years later—was from Marriott, where he was finally hired in 1995 as part of the market planning and feasibility team. Throughout his tenure at Marriott, he led full-service development efforts in the western United States and Canada, expanding his responsibilities to include North America, the Caribbean, and Latin America, eventually rising through the ranks to oversee global development, design, and operations services.

In his new role as CEO, Capuano says there is enormous support for the course set by his predecessor, one he plans to continue. “Our owners and franchisees, our guests, our business partners, and our board and senior leadership are all very enthusiastically supportive of the direction that had already been set for the company.”

Capuano stresses that “strong and rapid demand recovery,” which he notes is already underway, will be a top priority in the short term, as it benefits all the constituencies he serves: associates, owners and franchisees, guests, and shareholders. Guests want the full range of lodging choices, while shareholders are focused on the bottom line, he explains. Owners and franchisees, “who lost billions of dollars of enterprise value and were forced to make difficult staffing decisions,” he says, are “now looking to climb out of that hole.” Capuano adds that full recovery is also essential to the survival to the company’s culture—one that its associates, many of whom were subject to furlough or reduced hours during the pandemic, embody. He says he is personally committed to repairing damage done to the culture. “This is a company that for nearly a century was built on the notion of taking care of its associates. I consider it a solemn responsibility to do everything I can to take care of our people around the world.”

Addressing a topic that has perhaps received less attention over the past year, Capuano says unit growth, which he calls “the other big lever that drives the company’s economic model,” will continue to be a significant priority for the company. “I am optimistic about our growth trajectory based on our first-quarter earnings call, which reflected stunningly strong signings and openings, which is a great indicator about the appeal of our 30 brands to the owner and franchise community.” Capuano says Marriott’s growth is also supported by its recent deal with Sunwing Travel Group’s hotel division for the conversion of 19 all-inclusive resorts representing nearly 7,000 rooms. “We continue to have the biggest pipeline in the industry at nearly 500,000 rooms, and to have more rooms under construction around the world than any other player in the industry.”

Capuano says the pandemic experience, combined with his 26 years with Marriott, have given him a much deeper appreciation for the power of Marriott’s culture, which he says had already seen the company through numerous challenges including 9/11, the AIDS epidemic, and numerous economic downturns. “As I talk to our people around the world, I am struck by their resilience and adaptability. The alacrity with which they take on the challenges they’re dealt every day is nothing short of remarkable.”

He recalls the early days of the pandemic when hotels donated food that would have otherwise gone to waste to local organizations and delivered guestroom amenities to frontline healthcare workers. He also notes the creativity of team members who recognize and adapt to the needs of their communities, citing an example of a hotel that repurposed meeting space to host dance competitions.

Reflecting his appreciation of those who have built and maintained what he calls “a battle-tested team,” Capuano says, “To those who ask me how it feels to follow a generational leader like Arne to take on what was characterized by the Wall Street Journal as ‘the most challenging job in American business,’ I would say, “It would indeed be daunting if I were tasked with taking it on alone.”