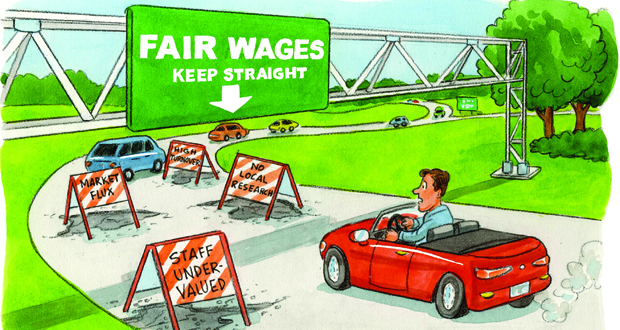 There has been a lot of talk recently about bumping the federal minimum wage significantly, to the tune of $15 per hour. This would impact small businesses all over the country, and many in the hotel industry have balked at the idea, worried that it could affect their bottom lines so significantly they’d need to close their properties.

With the new presidential administration, it now seems unlikely that the $15 minimum wage will become a reality. However, many people in the lodging industry are already paying their line-level employees more than that $7.25 per hour—in certain markets, significantly more. “According to our studies, very few employees in the lodging industry make the minimum wage,” says Randy Pullen, president and CEO of WageWatch, a Scottsdale, Ariz.-based source for compensation survey data. “And if they are making minimum wage, it’s only for the first six to nine months. Once they prove themselves, their salaries are generally increased.”

Hotels have a demonstrated track record of paying employees well, but the actual rate of pay varies wildly from market to market. The average housekeeper in New York City makes a lot more than the average housekeeper in Dallas—$25.53 per hour to $10.38 per hour, according to a 2016 WageWatch report. While one of those numbers is much higher than the other, housekeepers in both cities have a similar quality of life, because the cost of living is higher in NYC than in Dallas.

And, increasing employees’ salaries significantly can potentially do more harm than good. There could be unintented consequences like bumping hotel employees over the threshold for government assistance.

With so many variables in play, hoteliers might find the idea of setting a “fair wage” for employees overwhelming. Luckily, there are steps hoteliers can take to ensure they’re offering wages that are right for their hotels. First, of course, is conducting basic research. Different markets have different costs of living, so a “fair wage” in a city with a low cost of living would be a lot different than one in a city with a high cost of living. Consulting entities like WageWatch that have a lot of data at their disposal can help hoteliers make informed decisions.

And it shouldn’t stop there; hoteliers can also rely on outside entities for help. Employment lawyers and management companies are extremely practiced in helping set wages, and they have many strategies in place when it comes to making sure those wages are fair. “We do wage surveys at least once a year in every hotel in our portfolio,” says John Belden, president and CEO of Atlanta, Ga.-based management company Davidson Hotels & Resorts.

Belden stresses that researching what constitutes a fair wage in a given market is an ongoing process. “Wages are not something a hotelier can set and forget,” he explains. “If the market’s changing and you’re not, you’re going to make yourself vulnerable and not attract the best talent in the marketplace. You’re also going to start losing the talent that you do have.”

Turnover is something that all hoteliers should keep in mind when it comes to wages. Underpaying qualified staff members will lead to more people moving on to look for better pay and greener pastures. According to Belden, this is something that can and should be avoided. “Turnover is very costly,” he says. “But, even more important, turnover has a severe impact on service. If you’ve got people in place who already understand and embrace the culture, who already understand and embrace the roles and responsibilities they have in their respective positions, then you have a stronger team that can better serve customers in a way that creates stickiness and brings them back to your property.”

Pullen agrees that keeping employees is one of hoteliers’ top priorities when looking to set wages. “Lots of people think that when hoteliers discuss wages, it’s because they want to keep them down. Actually, it’s the opposite. They’re trying to make sure their employees are being paid properly in each marketplace,” he explains. “The last thing employers want is to lose an employee because of his or her wages.”

Centralized Data Hubs: How PMS Can Help on the Road to Recovery

Ask Anthony: How to Choose Which Technology to Implement in Hotels