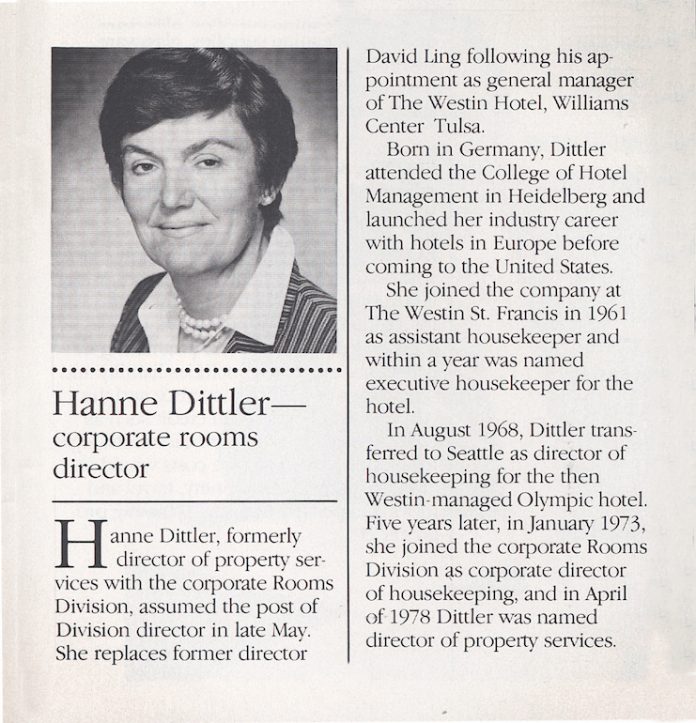 For much of the hotel industry’s history, the story of women employed in hotels was one of low pay, second-class status, and no real hope for advancement. For women who aspired to an executive role in lodging, the one position available was director of housekeeping. While the very word “housekeeping” might conjure up thoughts of a dull job, in reality, it is a position absolutely vital to the successful operation of a hotel.

In the 1960s, Hanne Dittler of Westin Hotels would prove the importance of housekeeping through data analytics and carefully engineered efficiencies. She knew that housekeeping was so much more than changing sheets. Dittler once said, “Housekeeping is critical to the profitability of a hotel; the hotel’s basic product is a clean, comfortable, and attractive guestroom.”

Dittler began her hospitality career as a floor housekeeper before moving up the corporate ladder. She eventually helped to create the Westin Heavenly Bed and Pillow, one of the industry’s most successful marketing and brand identifiers by way of housekeeping.

Born and educated in Germany, Dittler attended the College of Hotel Management in Heidelberg. She came to the United States in the late 1950s and soon began her career in hospitality. In 1962, she joined the housekeeping staff of the St. Francis Hotel; the following year she was appointed head of housekeeping. After five years at the St. Francis, Westin’s legendary leader Eddie Carlson hired her for the Olympic Hotel in Seattle. That property also served as Westin’s corporate headquarters.

As she did at the St. Francis, Dittler took her position at the Olympic as an opportunity to transform a job perceived as mundane into a position based on science and the mechanics of efficiency. She analyzed every part of the room and bathroom with consideration for the entire cleaning process—from how long each task took to how to best motivate room attendants. She introduced “carnation day” for attendants who met certain metrics, including courteous behavior, keeping a neat and organized cleaning cart, and, of course, cleaning guestrooms.

In 1973, she joined the Westin corporate rooms division as director of housekeeping. She was later named vice president of the rooms division, then corporate director of rooms. She aimed to find the right mix of speed and cleanliness. She redesigned housekeepers’ cleaning cart, making it more efficient and shaving off wasted minutes.

Dittler attended more than 50 hotel openings for Westin, spending four to six weeks on pre-opening organization. To her, it was critical that the housekeeping staff be trained on current cleanliness standards and be attuned to the time spent cleaning. Perhaps her most important contribution at these new hotels was how she instilled in new housekeeping staff the importance of their job to the overall success of the hotel.

Within Westin, Dittler’s knowledge of the guestroom in all facets proved invaluable to the hotel chain. In the 1990s, when Westin was trying to differentiate themselves from their competitors, Dittler contributed to the establishment of Westin’s Heavenly Bed and Heavenly Pillow campaign. With her years of experience and her encyclopedic knowledge about beds, including the manufacturing process, the best materials for comfort, durability, and ease of cleaning, as well as design, she knew better than anyone what made for a good bed and pillow. It is fair to say that Dittler’s years of housekeeping knowledge was instrumental to one of the most successful hotel advertisement and brand campaigns in lodging history.

No Tipping: Miss Mary Lindsley and The Grace Dodge Hotel

Individual Identities: The Evolution of Hotel Names in the United States

Getting the Most Value Out of Every Guest Booking and Stay

A Look Back: The Accomplishments of Curt Strand