Home Industry News Ahead of the Curve: Marie Dobson Paved the Way for Major Advances... 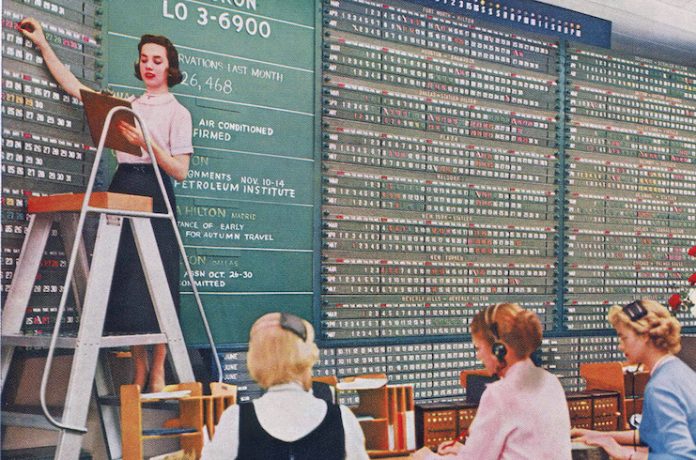 In 1954, Marie Dobson, a recent graduate of the Katherine Gibbs Secretarial School, began a lengthy career at Hilton Hotels. Starting in a clerical position, she eventually rose to become president of Hilton Service Corporation, the home for Hilton’s reservation services. She was smart, industrious, and ready for a challenge, but little did Hilton know that Dobson would not adhere to the employment norms of the time for a woman in the lodging business. Dobson was one of the original eight people to organize and staff the new Hilton Reservations office in New York City, known as HILCRON, under the leadership of Marc Armani. In the mid-1950s, this pathbreaking technology permitted room reservations 90 days into the future. The ability to make reservations that far in advance and to know what kind of rooms (double, single, or suite) were available at each of the 27 Hilton hotels was a game-changer at the time. Hilton also did not charge the guests for the long-distance telephone call needed to book the reservation, a sizeable cost for the company in the pre-iPhone era but a significant savings for guests. By coming in on the ground floor of this new technology, Dobson learned how reservations worked and how they could be improved.

As Hilton Hotels expanded in the United States and around the world, Dobson’s responsibilities expanded as well. In fact, she helped set up the reservation offices in many of these new destinations. Particularly in the international destinations, bridging local technology to that used by Hilton, as well as hiring the personnel for the expanded reservation offices, was a daunting challenge. The reservation offices realized they were the first contact with potential guests, and as such, courtesy and a timely answer to customer questions quickly became their ethos.

Perhaps the biggest challenge that Dobson encountered was the relentless change in communications technology. In an era where technology was viewed as a man’s domain, Dobson showed she could achieve a superior mastery of the new technology. It was at her direction that the service standards were set. Also, as technology changed, she helped usher in the many advances. In 1961, reservations came in by telephone, teletype machines, fax machines, and Telex cable. In 1975, as director of operations, she helped inaugurate the first computer for the reservation service, eliminating much of the typing work and allowing for more information per request and personal service. That same year, she was elected VP operations for Hilton Service Corporation, directing the operation of Hilton’s worldwide reservation system. Ten years later, she became president and CEO of Hilton Service Company. In 1985, she moved Hilton Reservations to Dallas, expecting to grow to 10 million customer calls by 1986. To facilitate the increasing number of guest calls, she helped launch 800-HILTONS. This easy-to-remember phone number made it much simpler for potential guests to contact the reservation center.