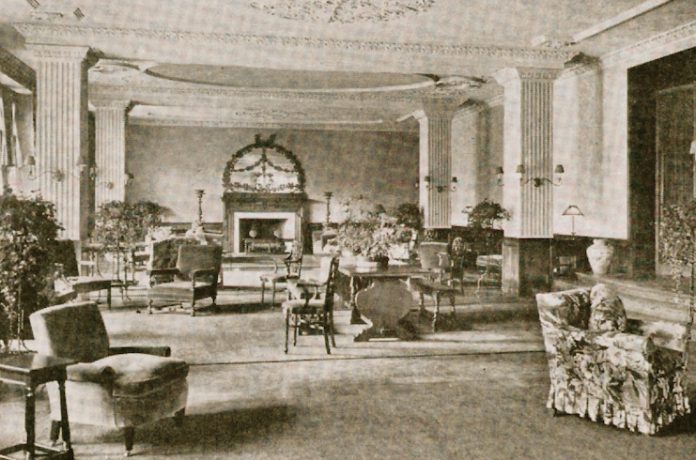 The American entry into World War I in 1917 led to a dramatic increase in the size of departments in the federal government in Washington, D.C., and also a corresponding need for workers to fill those new positions. As a result, a steady flow of single women moved to the city in search of employment. Besides the construction and management of female dormitories, the leadership of the YWCA helped fund the construction of a hotel for women.

The war ended in 1919, but the demand for housing for women in Washington remained high. The construction of the hotel for women continued and it finally opened on October 19, 1921. Located at North Capitol and E Street NW—a short walk from Union Station—the 376-guestroom, eight-story Grace Dodge Hotel was named after one of the founders of the YWCA and a financial supporter of the organization.

What is especially noteworthy about the Grace Dodge Hotel was the appointment of a woman, Mary Lindsley, as the general manager. At the time, she was the only woman to serve as manager in the Washington area and perhaps the only woman in the nation to manage such a large and prominent hotel. Born and raised on a farm in northern New Jersey, Lindsley showed an aptitude early on for figures and was put in charge of the family finances and the payroll for the farm. She later attended Pratt Institute where she studied to be a dietician. She served as hospital dietician director at several institutions, but her management skills soon had her expanding her duties. During World War I, she served as a camp dietician overseas, and after the way, she was placed in charge of a large dining room for one of the Washington female dormitories.

Her work caught the eye of the YWCA leadership, most notably the new chair of the housing committee for war workers, Abby Aldrich Rockefeller, and she was hired to staff and manage the Grace Dodge Hotel. The operation of the hotel was notable since the leadership and staffing of the facility was almost exclusively women. A well-run hotel staffed by women in the 1920s was certainly a novelty, and many “experts” predicted failure. Magazines and newspapers carried the story of this most unique hotel staffed by women. Over time, however, the articles shifted the focus from “the inevitable expected failure of a woman in a management position” to the popularity of a well-run hotel. As a result, Lindsley became one of the first high-profile women in the lodging industry.

As manager of the Grace Dodge Hotel, Lindsley incorporated a “no tipping” policy for the hotel employees. She paid her staff higher wages than the going rate and they refused to accept tips. It proved successful, and the feared loss of staff to other hotels never came about. Years later after Lindsley left, the hotel ceased the policy. By the mid-to-late 1930s, a hotel management company took over operations, renaming it the Dodge Hotel and allowing men to stay as guests.

Lindsley successfully managed the Grace Dodge Hotel from 1921 to 1936. She then moved to Williamsburg, Virginia, where she helped to design and open the Colonial Williamsburg Inn. While largely forgotten today, Lindsley’s successful operation of two prominent lodging establishments was a model for the successful opening and operation of hotels. The fact that she was a pioneer woman in the hospitality industry makes her achievements that much more noteworthy.