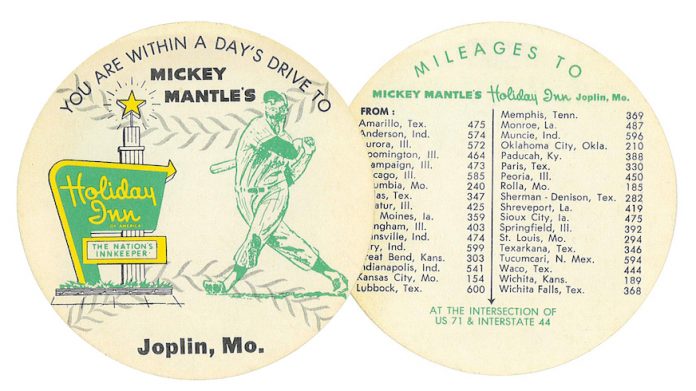 Mickey Mantle was one of the hottest sports stars of the 1950s. At the time, much like today, sports icons were in high demand for endorsement deals. In his memoir, “The Mick,” Mantle explained how as a young baseball star with the New York Yankees, he created Micky Mantle Enterprises to handle endorsement and investment deals. In the era before large sports star payrolls, Mantle needed the extra income during the off season. He gave speeches, helped open shopping malls, did various radio and television commercials, and even endorsed a pancake batter called “Batter Up.”

In 1957, Harold Youngman, a longtime friend, advisor, and business associate of Mantle’s, had a special deal for him. The duo’s friendship dated back to Mantle’s days in the Joplin, Missouri, minor league franchise, and Youngman had proven himself to Mantle when he put the rookie Yankees player on the payroll at $500 a month. It was during the off season of baseball when Youngman hired Mantle, who needed a job to provide for his family.

To many, Youngman was known as a highway builder during a time when the first of the interstate highways were under construction. In 1957, Oklahoma opened the Will Rogers Turnpike running from Tulsa to the Missouri state line just a few miles from Joplin. Taking advantage of the new highway, Mantle and Youngman formed a corporation, and they built a hotel on the Southside of Joplin near the new interstate interchange. Mantle had a 25 percent ownership, while Youngman and other associates owned the rest of the hotel. Mantle claimed he only had to pay 5 cents per share in the deal.

The new hotel was the Joplin Holiday Inn, and they were given the rights by Holiday Inn to use Mantle’s name in signage and advertising—Mickey Mantle’s Holiday Inn. According to Mantle the property was the 200th Holiday Inn. Originally the hotel had 35 rooms, but it proved so popular the hotel soon doubled its room count. The thought of staying at the Holiday Inn that Mickey Mantle “owned” was a temptation too hard to pass up for the traveling public.

The hotel contained what one reporter noted was Joplin’s first sports bar, the Dugout Club. The sports-themed club had photos on the wall, bats, gloves, and all kinds of baseball memorabilia. Most importantly, it included many artifacts from Mantle himself. Like all other properties in the chain, the Mickey Mantle Holiday Inn had a dining room, free ice for guests, and a swimming pool. All these amenities were needed for the motoring public of 1950s America. Mantle’s Holiday Inn proved very successful, and the company he and Youngman formed ran the property for eight years before selling, earning Mantle a tidy $100,000 profit.

In the years ahead, Holiday Inn and other hotel companies would have all manner of sports tie-ins. In the 1970s, Holiday Inn had cards or coasters featuring baseball players’ images. Once guestroom key cards came around, Holiday Inn would have images of ball players on those as well, including Hall-of-Famer Cal Ripken, Jr.

Mark Young, Ph.D., is director of the Hospitality Industry Archives at the Conrad N. Hilton College of Hotel & Restaurant Management, University of Houston.

No Tipping: Miss Mary Lindsley and The Grace Dodge Hotel