Home People Marking a Milestone at a Historic Moment 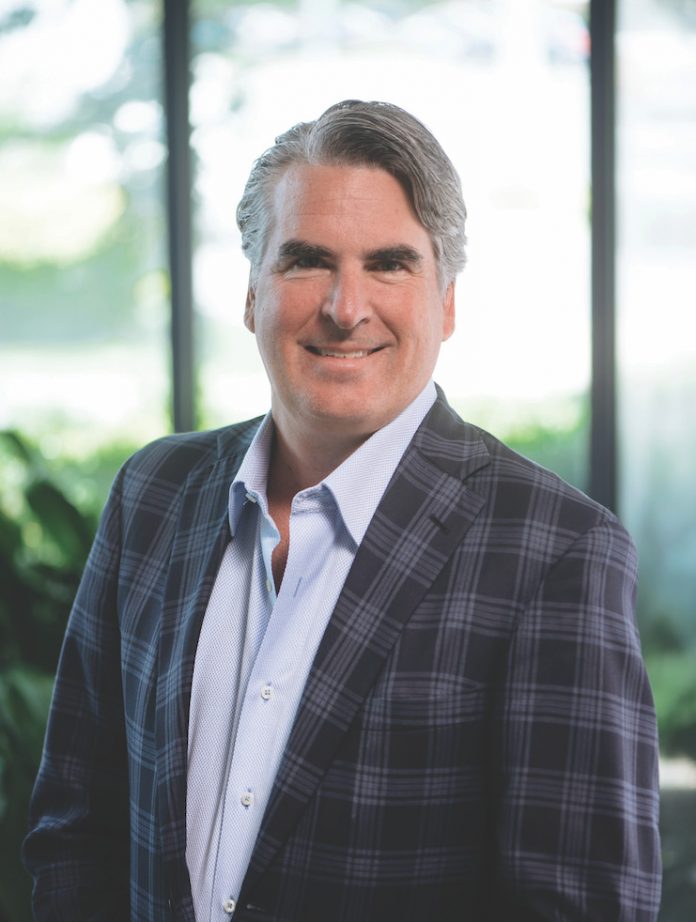 Mike Marshall is president and CEO of Marshall Hotels & Resorts, which started in 1980 as a two-man show in his family’s home office and has grown into a cumulative 100,000+ employee property management empire. Although he had worked in his family’s hotels since they opened their first property when he was 15, his mother initially steered him away from the hotel business because of the long hours Mike’s father, Chuck, put in as GM of a full-service hotel. “She encouraged me to get a liberal arts degree, so I majored in history,” he says. As it turns out, he told LODGING, he’s found the main lesson of history—learning from the past—most useful for weathering the ups and downs of the hotel business throughout the company’s history (see sidebar below), including the challenges of the COVID-19 pandemic.

Marshall recalls how his father’s earlier hospitality career managing hotel restaurants meant not only the long hours his mother disliked, but moves from state to state before settling in Salisbury, Md., after founding their company.

He says his uncle, who was then and still is in commercial real estate, pushed his father to start the hotel management company in 1980 as a limited partnership with three hotels. “He had spent six months without a job putting the deal together, for which he received a piece of the ownership and the job of managing the hotels in lieu of a financial investment.”

“It took a while for our industry—especially in the mid-market and economy chains—to embrace the humanist side we talk about so much now.”

It was in one of those first three hotels—a Holiday Inn in Salisbury, Md.—where Marshall got his start in the business. “I worked there throughout high school. I’d go from soccer games to the hotel to wash dishes until 2 a.m., and on Sundays, I’d go from flipping omelets at the brunch buffet to working the front desk. It was hard work, but the family was still low on funds, and I had car payments.”

Despite his mother’s early words of discouragement, at one point, he says, “I had enjoyed the hotel business through high school and summers and decided to give it a whirl.” He says coming from a family in the business was not an advantage in getting a job with other companies—they assumed they would just be training him to work for his father. Eventually, Marshall secured a management training/internship with a small hotel chain in Roslyn, Va.

Once he proved to himself and his parents that he could contribute to their company, he found himself back at a Comfort Inn he had helped build as a carpenter, but this time as general manager. “I had already done every possible job, from cleaning rooms to maintenance to construction. Then one day in 1988, my father called, saying, ‘The company is starting to grow, and I need someone I trust to run this hotel. You’ve got the experience now.’”

Marshall Hotels & Resorts CEO Mike Marshall admits his choice of history as a college major was more a lifestyle than career decision. Yet, he says, learning from his own mistakes and being witness to the example set by his frugal but steadfast father during market ups and downs and transitions are helping his family’s now 40-year-old firm slog through current challenges using their own history as a guide, knowing this, too, shall pass.

As the recap below demonstrates, Marshall says his company has survived and thrived mainly by being resilient and flexible and very much itself. “We have been chameleon-like throughout history; we have learned how to navigate through the hard times while still growing as a company.”

During the early 1980s, the focus was on purchasing and developing hotels, but in the aftermath of the construction boom that precipitated an S&L crisis, they pivoted to third-party management.

Then, with a strong economy and another construction boom in the late 90s, they doubled the size of their management portfolio.

During the recession that followed the 2001 tech meltdown, Marshall focused on helping owners—existing and new—stay afloat.

During the construction boom of 2006-2008, Marshall helped the crush of owners buying and selling to navigate the market and get the best deals possible.

Between 2008-2011, Marshall began by continuing to open hotels in the pipeline when the Great Recession hit in 2008; they then changed their name from Marshall Management Inc., to Marshall Hotels & Resorts to reflect their focus on rescuing troubled hotels.

The period between 2011-2019 was marked by industry growth coupled with new, highly competitive digital marketing practices requiring Marshall to stay abreast of these platforms to reposition many properties and increase their digital footprint.

The COVID-19 pandemic is forcing the entire country to navigate uncharted waters related to public health and business conduct. Marshall is proud that it is among few who did not furlough any staff.

He describes the people and experiences that shaped him as a leader and a person. He learned what not to do by seeing how a GM who cared only about the bottom line demoralized and demotivated his employees. This, he says, was in the early days of limited-service hotels, when cost, not customer service, ruled the day. “It took a while for our industry—especially in the mid-market and economy chains—to embrace the humanist side we talk about so much now.” He, too, stepped on toes as a young GM. “I was very demanding of people, and when they didn’t meet my expectations, I didn’t hesitate to replace them, even if I didn’t have someone to fill the job. As a result, I ended up working the front desk for 20 hours a day for a couple of weeks.”

On the other side of the coin were problems many wish they had—becoming bored with his job when his hotel was running 96 percent occupancy and having a staff so experienced that he just didn’t have enough to do.

Bringing back the challenge was becoming general manager of a Holiday Inn (also in Salisbury) before traveling to trouble-shoot for the company. Going to Fredericksburg, Va., where the company had just bought a distressed hotel out of bankruptcy, and Ann Arbor, Mich., both to deal with a Sheraton in bankruptcy and learn more about food and beverage, which he considered a weakness in his hotel experience. “It was 1989, and we were in a bad economy. I was just trying to keep the doors open. I ended up sitting in seven different desks during the year I spent in Ann Arbor. I also met my wife, who was a part-time bartender there.”

As Marshall was building his career, he leaned on the expertise of two “influencers.” First, of course, was his father. “Call him frugal or even cheap, my father was very budget-oriented. This is something that makes a huge difference during poor economic times, especially in terms of how quickly a property can come out of a downturn.” There was also the food and beverage director at a D.C. hotel where he worked early in his career. “He taught me to look at things differently. During lunches at different restaurants, we’d sit and analyze the service and table setting. It gave me the critical eye that I had been missing—something that is essential in a company like ours, which has become something of a turnaround specialist. Even now, I can tell you within an hour or two of arrival what’s wrong with a hotel. We might not be able to fix it right away, but we know how to do it right.”

Marshall regards the current pandemic somewhat through the eyes of the history major he once was, often looking to the history of his own company and using the patience he finally learned, as well as perspective to evaluate and manage the crisis at hand.

“We’ve seen hotels that were once flying high that are shut down. But now, on our 40th anniversary, it’s important to understand that we’ve been through a lot of bad times as well as good ones. My dad’s budget-watching sensibility is crucial, as is mining any piece of business just to keep the lights on and keep our people employed and engaged,” he says. “We may not have a Christmas party this year, but we haven’t laid off or furloughed any employees because we believe keeping hotels open is the better move for our portfolio than temporarily closing. Not only does it remove the possibility of having to re-ramp up, but it sends a clear message to the communities in which we operate that we are an active member attempting to help people and businesses through these extraordinary circumstances.”