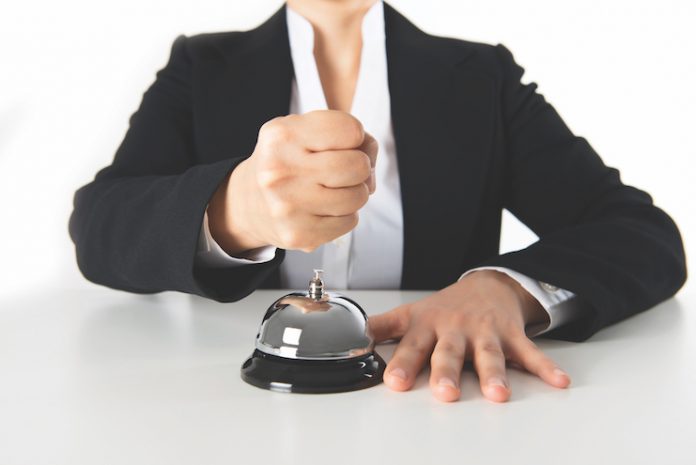 The vast majority of risks to hotel security are posed by unruly guests or patrons of the hotel bar who have had one too many. That’s why the strongest and most important tool in the security provider’s toolkit is de-escalation. To prevent difficult situations from becoming worse, or to diffuse a potential problem, the author and some security professionals from his company, LionHeart Security Services, offer strategies hotel staff can use.

According to director of operations Bill Herzog, who was a law enforcement professional for 25 years before joining LionHeart’s staff, when attempting to deal with someone who is angry or otherwise out of control, it’s important to remain calm, starting by lowering your tone of voice. This, he says, may sound simple, but can prove challenging. “Don’t try to fight fire with fire. If a person at your property is overreacting to a problem, don’t match their intensity. Show empathy. Tell them you understand. And, above all else, stay calm.”

Maintaining that 93 percent of communication is non-verbal, Herzog says staff can avoid triggering an agitated person by adopting a nonaggressive posture and demeanor and facial expressions that convey openness and warmth.

“Don’t try to fight fire with fire. If a person at your property is over-reacting to a problem, don’t match their intensity. Show empathy. Tell them you understand. And, above all else, stay calm.”

Often an upset person just wants someone to listen; yelling can be an unconscious reaction to not feeling heard. So, sometimes, you can calm a belligerent person by giving them permission to vent. As Donna Stovall, a security professional of 10 years and LionHeart’s in-house hospitality security manager, explains, “A lot of times, pulling the guest to the side and letting them talk can bring down a situation. When you allow the person to vent, you can get to the root cause of the situation. Other times, the guest knows there isn’t a solution, but they want someone to hear their frustration. Giving them that space can take the wind out of their sails.”

Security professional Bill Herzog describes how applying a knowledge of body language, facial expressions, and avoiding what might be construed as fighting words can help cool down a hot head.

Adopt a listening posture.
“Make sure to keep your feet placed firmly beneath you and stand still to show the person you are nonaggressive. Short jerky movements can them feel uncomfortable, so keep your movements even, smooth, and fluid.” He says to avoid, too, any physical suggestion of anger or prejudgment. “Stand with your shoulders back, and do not clench your fists. Keep your hands between mid-chest and waist, presenting a sense of openness. Never cross your arms, as this can be seen as a signal you are dismissing what the person is saying.”

Control your facial expressions.
Herzog reminds that facial expressions must be controlled in these tense situations, saying, “As humans, we pick up a lot of information from people’s facial expressions. The wrong expression can make the person angrier than they already are. Do not furrow your brow, and don’t squint or roll your eyes. Instead keep your eyes open with a soft gaze. Have a warm expression on your face and seek eye contact.

Watch your words.
Some words and phrases and manners of speaking are more likely to escalate than de-escalate a situation. One of the best examples of this is telling a person in in an agitated state to calm down, rather than letting them vent. An angry guest may also feel like they are being talked down to when given the same response repeatedly. Therefore, if something needs to be repeated, try to find a different way to phrase it. Then, too, are versions of that old embittering chestnut from childhood “because I said so.” Do not answer their question with phrases such as, “Because that’s the law,” or “Those are the rules.” An emotional guest might hear that as the member of staff isn’t working hard enough to fix the problem. Instead, try saying “I’ve done all I can do.”

The staff needs to be professional at all times in their speech with guests. People in a defensive state may feel they are being accused of something. While speaking to an emotional guest, do not use trigger words or phrases, like “calm down,” or give pat explanations.

As most hotel workers know, the way they dress greatly influences how people interact with them. They can often head off potential problems just by presenting a professional appearance. Staff members dressed in suits and ties are generally able to calm guests—such as those who are drunk or belligerent—more quickly than those wearing a security guard uniform, which can be a trigger. On the other hand, if the staff member dealing with the guest looks sloppy, it can send a message that they don’t care about their job, which may cause a guest to question if they are getting the best customer service possible and make them more likely to lose their patience faster than they would with someone who presents a more professional appearance.

Hotel staff occasionally aren’t able to de-escalate a situation on their own. At such times, a change in tactics can help. Sometimes, when an explosion seems imminent, just asking the guest if they’d like to speak to the manager can lead to a calming outcome. However, staff also need to be in fact empowered to ask the guard or manager on duty for help in dealing with situations, so proper hotel guidelines can be followed. One strategy guards or managers may use is the “off to the side” listening technique to calm the situation.

The keys to de-escalating common problems encountered in hotels boil down to remaining calm, listening, presenting in a professional manner, and communicating effectively. Training staff to apply these concepts, including applying the strategies described here, are what the author recommends.

Three Tips for Winning Over Guests in 2021

Keeping the Smile in ‘Service with a Smile:’ How to Deliver Service Beyond the Mask