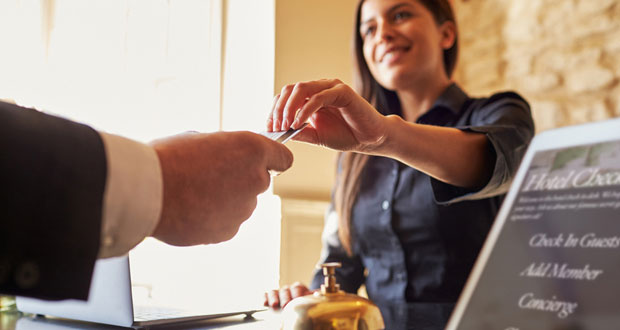 Over the last few years, the hotel business has attracted investment interest in all corners of the world. Yet the question remains: how should key players in the industry retain existing customers while attracting new ones?

The global hospitality market grows year on year at a significantly faster pace than that of GDP dynamics, and there is no reason to believe that this trend will subside in the future. The key drivers of market growth are the development of transportation infrastructure and a reduction in the cost of travel, but also crucial to this growth have been significant lifestyle changes–work-related travel has increased while vacations are taken more frequently and further away from home.

Even though the hotel market is static by nature due to its large capital intensity, extensive project construction, and long-term repayment schedules, this does not exclude it from maintaining its status as one of the most dynamic markets in the modern world. For instance, hotel services’ sales systems underwent a revolution long ago—consumers have become accustomed to booking hotels online, and, thus, having the opportunity to quickly compare options and choose those that best suit them.

The digitalization of internal processes continues: some hotels have automated check-in and check-out processes, while others allow guests to manage services through mobile apps. Yet alongside these more obvious trends, less noticeable but no less significant changes are occurring: customers are increasingly attracted by the policy of hotel customization, which focuses on adapting services to the needs of specific consumers.

The customization concept entails the adaptation of services to the needs of a particular customer by slightly altering the service in question. This adaptation can take many different forms–for instance, adjusting the distribution of guests within one room and the possibility of adding more beds into the room, as in the case of Meininger and Generator’s hybrid hotels, or specialized spa services, such as those offered by the Six Senses hotels. Modern technology can be introduced while retaining traditional features—as Vīb by Best Western hotels have shown by marrying contemporary culture with a historic touch, such as the decision to preserve real fireplaces at their hotels. Such transformations create a unique culture and atmosphere.

Over the last few years, major hotel operators have bought or created modern brands tailored to the preferences of individual clients. Radisson Hotel Group launched the lifestyle brands Radisson Collection and Radisson RED. The Radisson Collection, previously known as the Quorvus Collection, is the brainchild of an initial collaboration with the parent group of the fashionable Missoni brand and promises a five-star luxury service, unique design, and wellness at its best. Radisson RED, in turn, encompasses a series of high-tech hotels that provide guests with complete control over their experience.

Recently the InterContinental Hotels Group (IHG) brought its EVEN Hotels brand to the United States. The lifestyle brand emphasizes principles of nutrition, health, and wellness. Meanwhile, Canopy by Hilton is also a lifestyle brand, but focuses on localized F&B with a large selection of beers from neighboring breweries and a relaxed atmosphere inspired by each property’s surrounding neighborhood. Another experiential brand—Moxy by Marriott—attracts guests who are willing to sacrifice a sizeable room for the comfort of common social spaces—living rooms, playrooms, and bars—as well as shopping destinations within close proximity and the ability to order food around the clock.

The establishments mentioned above by no means form an exhaustive list, as hotel companies are introducing new brands and redefining legacy brands to focus on customization and guest experience.

Outside Brands Dive into the Hotel Business

In addition to the brand expansion of established market leaders, many new players have emerged from other industries, striving to create original and unique foundations for their hotels: take, for example, the hotel chain Six Senses, which made its debut in the European market after a popular spa launch; Hard Rock Hotels, born of and sharing its name with the music-driven Cafe; Bulgari Hotels, originating from the jewelry brand; Virgin Hotels, which boasts advanced design features and draws on the outrageous character of the brand’s founder, Richard Branson; and Nobu Hotels, founded by the popular restaurant network embodying the “East meets the West” concept and championing features of Japanese culture in design and in food.

Moreover, there are many enterprises that have started from scratch–the new Dutch hotel Zoku counts on ‘digital nomads’, who spend much of their time away from home, to make use of its fully-fledged studio apartment rooms. 25Hours Hotels had humble beginnings as a German design project of affordable hotels that turned into a line based on extravagance, creativity, and a modern approach. Each hotel is decorated in accordance with the spirit of its setting—for instance, the Vienna location is entirely devoted to circus art.

More recent hotel projects in Russia are carving out a stylistic niche. In St. Petersburg, a network of eight hotels by the name of Station distinguish themselves by their bright design and convenient locations. In Moscow, the newly created Netizen brand currently includes two hotels and a hybrid hotel reminiscent of the Meininger and Generator kind. Russia has also added players from other markets in the hotel business, such as Coffeemania, which opened its first MOSS boutique hotel in Moscow.

Regardless of the fate of each individual project, consumers will undoubtedly have plenty of options to lodging choose from that cater to their every need.

About the Author
Dmitry Schuetzle is a managing partner at VIYM. Dmitry has over 20 years of senior executive experience in financial services, industrial production, and retail. He leads the company’s investment offices in the UK, Luxembourg, and Russia. VIYM is an authorized Alternative Investment Fund Manager, regulated in Luxembourg and dedicated solely to private equity services for international investors seeking investment consulting, deal origination, and asset management.

Industry News Ellen Meyer - May 10, 2021
Charlestowne Hotels has faced a lot of changes since beginning as owner/operators of mainly branded hotels in the Charleston, South Carolina, area. Now butting...

Finance LODGING Staff - May 10, 2021
HENDERSONVILLE, Tennessee, and MILWAUKEE — The Baird/STR Hotel Stock Index rose 3.2 percent in April to a level of 5,297. Year-to-date through the first...