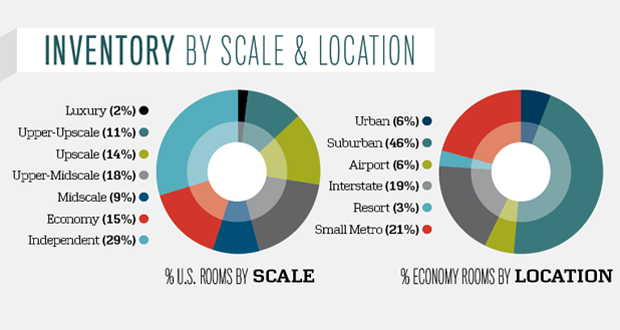 Economy hotels make up one of the seven chain-scale segments defined and benchmarked by STR. These chain scale segments are based primarily on annual achieved ADR (average daily rate), and when excluding the independent segment, economy falls at the bottom of the list in terms of pricing. However, when it comes to market share, this segment is very well represented, boasting more than 10,000 properties and over 780,000 rooms in the United States. The economy segment’s room inventory represents a 15 percent share of existing supply in the country, ranking it third among all chain scales. 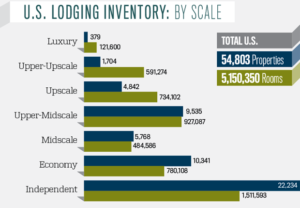 Overall, economy brands represent 21 percent of all branded rooms in the United States, second to only upper-midscale brands (25 percent). Almost half of economy properties are located in suburban areas, with approximately 20 percent of the segment’s inventory located in small towns and along the interstate.

In the last year, economy hotels, like the rest of the lodging industry, experienced ADR growth despite softening and relatively low occupancy. In the 12 months ending June 2017, the economy segment’s ADR averaged $61.55, a 2.9 percent increase as compared to the prior 12 months. Occupancy levels during the same time period were 58 percent, a 0.5 percent increase in year-over-year comparison. Demand growth increased 0.7 percent and outpaced supply growth of 0.2 percent over the same 12-month span.

Year-to-date numbers for June are trending closely to the 12-month moving average, with ADR just under $61 and an occupancy of 57.3 percent. While each metric grew year-to-date (increasing 2.4 and 0.8 percent, respectively), new supply in the pipeline will likely have a slightly negative impact on occupancy levels by the end of 2017. 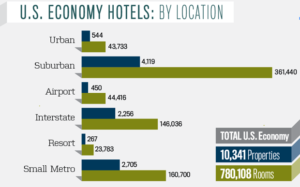 The economy segment is also attracting a lot of developers. As of June, 2,440 economy rooms were accounted for in the in-construction phase of STR’s supply pipeline, an increase of 128 percent as compared with June 2016. Even more rooms are in the planning and final planning stages (8,717), representing an increase of 171 percent from the same time last year.

While demand growth is expected to continue, STR does not expect that growth to match the pace of new supply. With an occupancy decline of 0.3 percent forecasted for total-year 2017 and another decline of 0.2 percent for 2018, ADR (increasing 2.5 percent in 2017 and 2.7 percent in 2018) will drive RevPAR for the next two years and into the foreseeable future.

A full list of brands in the economy segment can be found at str.com.

About the Author
Karrie Keen is a senior operations analyst at STR.