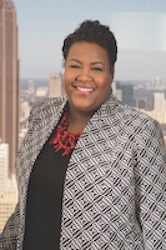 Erica Qualls-Battey, area general manager at Marriott International with responsibilities for Atlanta downtown, mid-town, and airport hotels, and general manager of the Atlanta Marriott Marquis, is a recognized leader in the hospitality industry, as well as in her adopted hometown community. As this mother of four told LODGING, her rise to her current position exemplifies the opportunities available to those who venture into the industry. Here, she describes that path and the people and priorities she holds dear.

Shortly after the birth of her fourth child in 1993, Qualls-Battey took a position as a part-time overnight PBX operator at the Santa Clara Marriott, figuring she could get out of the house and into the workplace while still being home for her kids.

She says, even then, she loved everything about working in hospitality. “There was always something to do, something to learn, the opportunity to take on more responsibility.” She even met executive chairman Bill Marriott himself one day shortly before her shift ended. When told she was new, she recalls, he took the time to shake her hand and ask about her family, in what she saw as the spirit of the hospitality industry in general and Marriott in particular. “I thought if I was going to go back to work and start a career, this is the best place to be, and I’ve been here ever since.”

The part-time job set her on a career path leading to a general manager job for Residence Inn in Santa Clara, then a move to Atlanta in an entirely different capacity. “I had majored in counseling and human behavior, so I was excited to take the position of human resources director, which enabled me to work with people.” She describes how her own career reflects what she loves most about the hospitality industry – the ability to grow and broaden her skills professionally in a people-oriented industry. Taking the job in Atlanta also enabled her family to trade the high cost of living in California to the lower one in the Atlanta area.

She remained in the human resource position for less than two years before advancing to the hotel manager position, which she held for four years. “My promotion to general manager of this magnificent hotel [the Atlanta Marriott Marquis] – with 1,663 guestrooms and 160,000 square-feet of meeting space – made me one of the first women in this role at a large convention hotel.” She likens the environment of that large hotel to a small city. “I loved the complexity and how I was able to sharpen my skills and broaden my thinking while working with our 1,200 associates.”

Commenting on the impact of COVID-19, Qualls-Battey says, like most hotels that depend on business and group travel, they are still operating with reduced staff – with whom they often communicate via Zoom – and observing CDC guidelines. She says senior staff also keep in contact with team members currently on layoff, and that the hotel periodically operates a food pantry where furloughed employees can pick up meals. Of those still on the job, she says, their duties have necessarily changed. “Because there are fewer people here, they are doing multiple jobs to get the business taken care of.”

Qualls-Battey notes how Marriott CEO Arne Sorenson embodied those values, and the blow his recent death dealt the entire company. “He just cared deeply about people and connected with everyone – those who worked for him, owners, business leaders. But he was also humble, asking questions, answering emails, and always growing. His natural instinct was always to look in the mirror and make sure that we were doing things right.”

For the Love of the Business

Qualls-Battey is grateful to have stumbled into the hospitality industry for all the reasons others should consciously consider it. “I think the hospitality industry is the best industry in the world. You get to travel, you get to have fun, and you get to connect with people in a meaningful way. I am so grateful for the day I walked into the Santa Clara Marriott, because it afforded me a life that’s been rich and full.”

In Praise of Community Service

Erica Qualls-Battey serves on numerous boards and has been recognized for achievements both inside and outside the hospitality industry. She says those “extra-industry” associations, including the Chick-Fil-A Bowl, the International Women’s Forum, the Atlanta Zoo, and Grady Health Foundation, provide different perspectives and allow her to learn about and understand other industries and other ways to do business while serving the community she has come to love.

“As you sit on boards for different organizations, you understand how they impact that city. It’s a way to learn and grow, but more importantly, serving the communities where you work is a critical part of contributing to the lives of those who live in the community, including your employees.” Qualls-Battey admits there have been times this desire to give back led her to over-commit. “At one point I was on 10 boards, but I’m trying to be more impactful by limiting it to seven or eight.” The benefit of this, she says, goes both ways. “When you’re in a city you love, you want to take care of that city.”