Home Operations How To Build a Mentally Healthy Workplace in Hotels 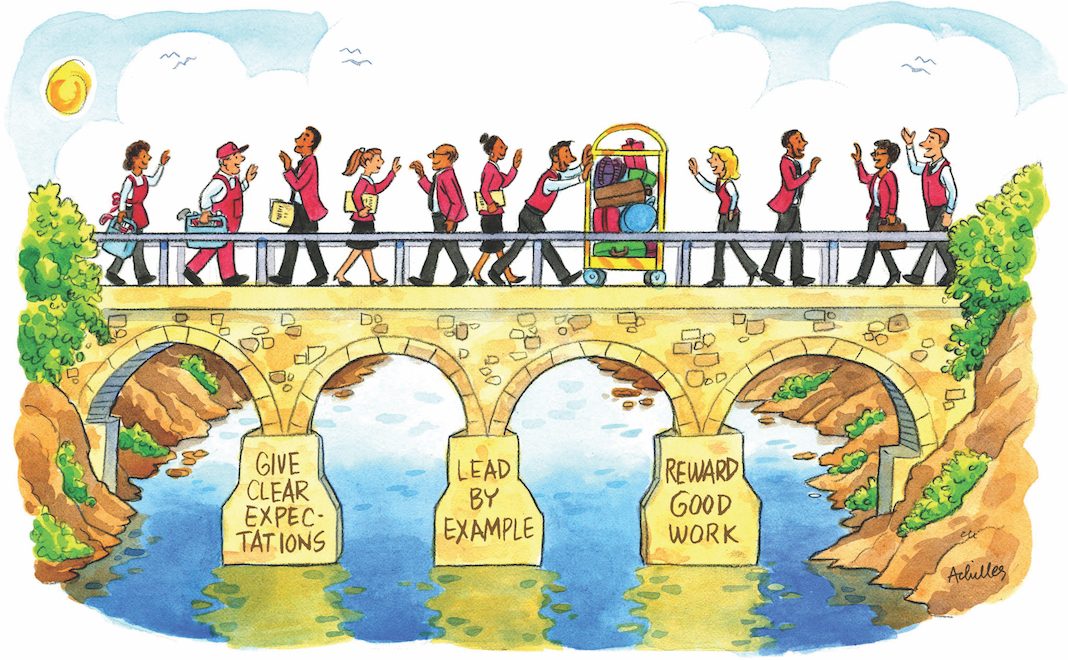 Not all organizations can be Google or Facebook, offering employees yoga rooms, nap pods, and on-site massage therapy. However, many hoteliers are trying harder to follow these tech giants in one way—by paying more attention to their team’s mental health. It’s critical to be aware of common pitfalls that can harm employees’ psyches. Leaders should know how to identify and remedy these problems, or better yet, prevent them entirely for the good of all.

Why Companies Should Invest in Wellness

The ROI is clear: dollars spent building a healthy work environment reap significant rewards, including to the bottom line. Offering employees a wellness program says, “We care about you, your health, and your happiness.” This makes employees feel more valued and motivated, as well as makes them stay longer.

According to the American Psychological Association, psychologically healthy workplaces experience 26 percent less turnover compared to the national average. Lower turnover saves companies significant dollars in recruiting costs. The Society for Human Resource Management (SHRM), the world’s largest HR professional society, estimates that every time a business replaces a salaried employee, it costs an average of six to nine months’ salary. This equates to $20,000 to $30,000 to replace an employee making $40,000 per year.

Employees whose wellness is supported by their employers also tend to make healthier lifestyle choices, which positively impacts their productivity. They outperform their unsupported counterparts more than 80 percent of the time; for example, employees who do not exercise are 50 percent more likely to underperform at work, according to research published by Population Health Management journal.

The Mistakes Even Wellness-Minded Companies Make

Frequently, it’s the “all-stars” who become victims of their own success. These employees tend to suffer in silence rather than admit when they are overwhelmed. They are often also the first called for the highest-profile projects, which leads to departments jockeying for their time. As a result, they are assigned not just to one or two departments, but spread across the most work. Yet, because they may prize their status as top performers, they can be reluctant to mention any stress. This “paradox of top performers” has tremendous costs in performance and moral, as these highly valued employees suffer from the most stress while middle to low performers may be more relaxed, feeling far less invested in the performance of the business.

Employees can “lose their way” when it comes to what it takes to perform their jobs successfully. Unclear, complicated, or ever-changing targets will lead to confusion and inconsistency. Employees need clear direction and feedback to perform. Team members should be able to articulate the two or three things that bring success to their roles. If they can’t, they may be confused about their role, leading them to “swim in the wrong lane.”

It seems that the team members who have something good to say about a new project, training initiative, or incentive plan aren’t the ones who are listened to most. It is too often those who have something negative to say who hold the highest influence on low-performing teams. Managers should take inventory of who their strongest players are and put them in leadership positions. This does not necessarily mean promotion; simple proximity is often the solution. Negative influencers can be moved to a part of the business where they will have less impact on team dynamics.

What Companies Can Do

The moral of the story is that even Google-size wellness programs can’t guarantee a mentally healthy workplace. Employees thrive in environments in which they feel valued and cared for, but it is not always easy for employers to recognize the ways work culture can contribute to poor emotional health. They need to avoid pitfalls such as “rewarding” top-performers with an ever-increasing stress-inducing workload and letting negative team members demotivate their colleagues, and they should follow best practices such as leading by example, providing recognition, and offering constructive feedback.

A healthy workplace is a big topic—described in books, journals, and on numerous websites including World Health Organization (WHO). The following excepts from the WHO Healthy Workplace Framework are geared toward employees’ emotional wellbeing in the workplace:

A healthy workplace is one in which workers and managers collaborate to use a continual improvement process to protect and promote the health, safety, and wellbeing of all workers … by considering … health, safety and well-being concerns in the psychosocial work environment, including organization of work and workplace culture.

A healthy workplace aims to: Foster work styles and lifestyles conducive to health.

Examples of psychosocial hazards include but are not limited to: poor work organization; organizational culture; command and control management style; and lack of support for work/life balance.

Up Front: Keeping Up Curb Appeal

Operations William D. Frye - July 5, 2022
Many travelers will hit the road this summer, increasing the need for enhanced curbside appeal at hotels near mainline routes. And while the adage...