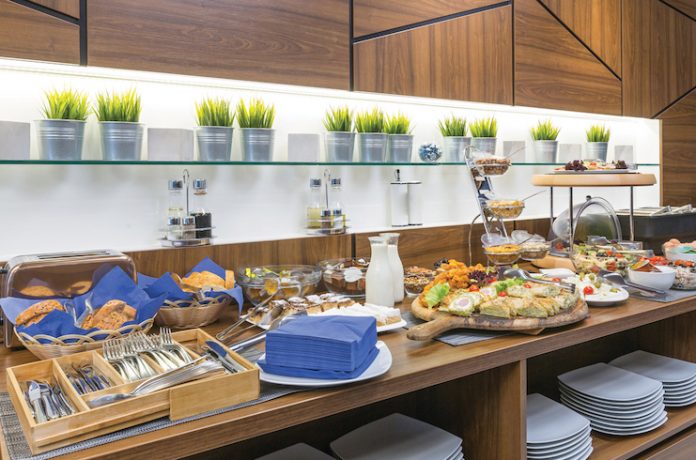 Throughout most of the pandemic recovery period, food and beverage (F&B) revenues have been the largest piece missing from the hotel profitability puzzle. Groups, events, and business travel went from thriving to nonexistent, contributing heavily to the lack of F&B revenues over the last two-plus years. Now, even as F&B operations ramp back up in the United States, there is a long way to go to reach pre-pandemic levels in profits and margins.

By July 2022, most departmental revenues and profits had surpassed 2019 levels on a year-to-date basis, but F&B revenues continued to lag at only 94 percent and 96 percent of the 2019 comparables, respectively. Despite the loss of revenues coming from F&B, hotels were able to turn profit margins to some of the highest levels ever recorded, thanks to lower expenses that come with limited operations in high-margin departments, such as F&B. However, as ancillary operations have picked up this summer, in an inflationary setting, hotel profits have started to gradually decrease, including those from F&B.

Early in the pandemic, U.S. F&B revenues for full-service hotels dropped to less than $1 per available room (PAR)—an unprecedented low. Thus, F&B margins went from an average of 27.6 percent in 2019 to negative territory. As operations have steadily returned, F&B revenues hit near-peak levels just shy of $80 PAR in May. Most of this increase in revenues came from leisure travelers increasing their spend at venues, particularly for beverages, as well as the return of smaller groups and events. In July, the percent of rooms revenue coming from groups grew from 12 percent to 19 percent, showing a clear correlation to the source of these rebounding F&B revenues. However, it seems F&B revenues may have hit their peak as they have declined to $62 PAR and profit margins declined to 22 percent in July.

While expenses have declined slightly on a PAR basis, profit margins have declined more drastically. F&B profit margins surpassed the previous peak in October 2019 this past April, reaching 35 percent, but have since declined 13 percentage points to 22 percent. The culprit here is inflation, while F&B revenues have also been low. F&B’s contribution to overall profits had averaged $20 PAR from March to June, but that recently dropped in July to just $10 PAR.

When looking at F&B revenues on a per-occupied-room (POR) basis, it is clear that group travel is still a critical piece of business that is missing. Catering and banquet revenues are down 31 percent compared with 2019, which is about $4-$5 POR less than 2019. On the other hand, meeting space rental, audiovisual equipment rentals, and service charges have increased slightly POR, which is ultimately from higher prices due to inflation, rather than from an increase in demand. Additionally, independent hotels have been outperforming chains with a $40-$50 POR premium, and hotels that are less reliant on catering and banquets have also been performing better. Labor costs play a big part in the overall F&B landscape. For the F&B department, labor costs are the largest expense, averaging $19 PAR in recent months. Breaking down labor costs, benefits are at slightly lower levels than 2019 levels as hotels are utilizing more contract labor, given that it is easier and more cost-efficient to find contract labor than full-time employees. All other F&B expenses, while they have also been growing, are averaging only $11 PAR.

While the gradual return of group demand has been driving some increase in F&B, there is still a long way to go to get back to previous levels of consistent F&B profits and margins. F&B directors have had to get creative in cultivating a desirable F&B experience for guests, as consumers have redirected their spending toward experiences and viewing more options when it comes to F&B, particularly in the face of inflation. The pandemic has sparked a new way of thinking about F&B in hotels, making the connection between guest satisfaction and revenue and expense management a tougher balancing act to manage. Moreover, labor will continue to be a top issue for hotels—not just finding labor but finding the right labor to ensure brand quality. 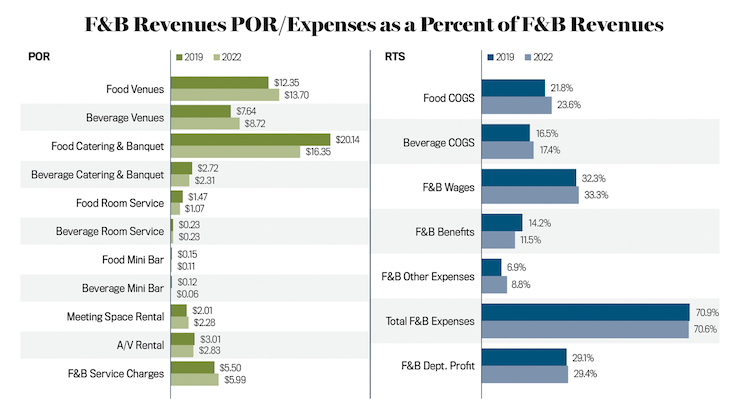