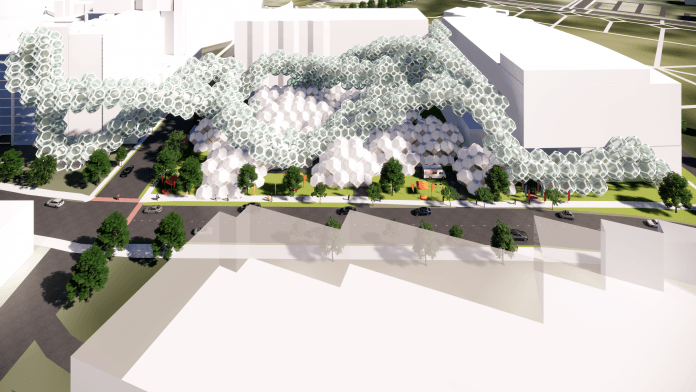 Over 50 international entries were submitted to this year’s Radical Innovation competition from which three professional finalists and one student winner were determined based on their design, creativity, feasibility, and ability on making an impact in the industry.

The three professional finalists — Infinite Explorer by SB Architects, Connectic by Cooper Carry Architects, and Volumetric High-Rise Modular Hotel by Danny Forster & Architects were presented in front of a live audience, in addition to this year’s student winner, Rooftop Hotel Gardens. In a live vote by the audience members, Connectic became the recipient of this year’s $10,000 grand prize. Volumetric High-Rise Modular Hotel received the runner-up recognition, a $5,000 prize. Student winners Ruslan Mannapov and Airat Zaidullin of Russia’s Kazan State University of Architecture and Engineering were awarded $1,500 for their concept, Rooftop Hotel Gardens. Both students will also have the opportunity to pursue an assistantship for a Master’s of Architecture Degree in Hospitality Design at UNLV.

Connectic employs modular construction techniques to fill underutilized spaces by way of collapsible, modular units that are flexible and adaptable to respond to a variety of environments.