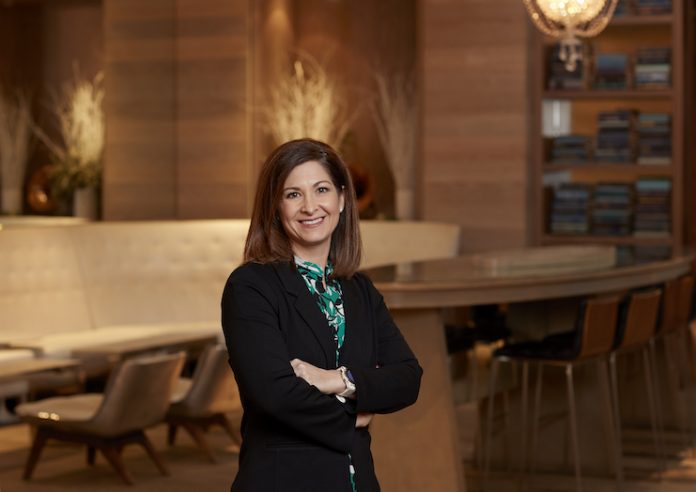 Aimbridge Hospitality is finding new ways to support owners during the COVD-19 pandemic. In direct response to the crisis, Erica Hageman was hired as chief government affairs officer, a newly created role for Aimbridge. Before this move, Hageman served as executive vice president and general counsel at Interstate Hotels & Resorts for more than a decade, including through Interstate’s merger with Aimbridge last year. Following the announcement of her new position, Hageman spoke with LODGING about responding to the pandemic, working with AHLA, and supporting owners through the crisis.

What made Aimbridge recognize that they needed someone to spearhead the government affairs department to keep owners abreast of the issues that are happening?

Since the merger, I have been focused on leading integration, making sure the two organizations were coming together to be best-in-class. I’ve also been involved with AHLA as part of their General Counsel Committee for a number of years, and we were having calls relating to legislation. It became apparent that there was a lack of understanding in the job language. My job had started to shift even before the formal ask in trying to understand the legislation and how it might apply to both Aimbridge and the owners we manage for. Collectively speaking, although we have a diverse population of owners, they are all looking for guidance on how we can weather the storm together, and government legislation is a key component of that.

Given all the questions around it and focusing on how we can make it through this together, we thought it would be important for our owners and for us to have a voice. That’s how my position came about. Since then, we’ve been working closely with AHLA to make sure that they understand where the legislation drafting may leave a bit to be desired. We helped to draft statements to go up the hill and to the SBA. We’ve actually tried to directly push some of our advocacy efforts with the SBA and treasury to help our owners take full advantage of the legislation.

There are many different responses to this crisis, from people who acting decisively to people who are stepping back and waiting for this to pass. Why is it such a priority for the merged company to make these moves and put itself in this position when many people are hesitant to act?

We have always approached our owners as our business partners in a lot of ways. Some of what comes with Aimbridge’s size and scale is a very loud voice that we have an obligation to use on behalf of ourselves and our owners that we manage for. We all are focused on surviving this together. We think there’s an obligation on our behalf to help owners survive this crisis and help our business survive this crisis as well. At the end of the day, this is all about people who work for us collectively and how we manage to get them back to work.

How are you working with AHLA? How does that play into your strategy?

I’ve been on the phone with AHLA multiple times a day for the last few weeks. They are leading the charge as it relates to our industry as a whole. We obviously had direct meetings where they’ve been able to bring CEOs of all the brands and hospitality organizations to the White House to meet with the president and vice president. We have been focused on assisting AHLA and on our own advocacy efforts to make sure that third-party management isn’t overlooked in this process and to make sure that owners aren’t excluded from some of the legislation that was enacted simply because the legislature lacks a full understanding of how the players in our industry work.

How are you communicating the resources and support to your owners?

We’ve set up a dedicated email address to take in questions from our owners. We have FAQs that are going our frequently as we get more clarity on legislation and the way that it is applied. We’ve engaged both firms to help our advocacy efforts but also help us communicate with our owners and answer their questions. We’re doing townhalls on topics like loans, and we’ll have some regular communications going out so we can keep everyone knowledgeable in a very fluid and quickly changing situation.

Do you have any advice for hoteliers whose hotels are closed?

Unfortunately, everyone’s working more hours than there are in a day. The best advice is to work with their vendors, accountants, and lawyers to devise a plan that is best suited for their organization. It’s going to be different owner by owner, and having those conversations early will hopefully help.

From a government affairs perspective, send as many letters as possible to your local congressman and your senator. Every indication that we’re hearing is that the CARES Act is not going to be the last bill that deals with the crisis. To the extent that there are holes that aren’t fully covered, there’s another chance to get it filled. We all have an obligation to continue to talk and let them know what we need as an industry.