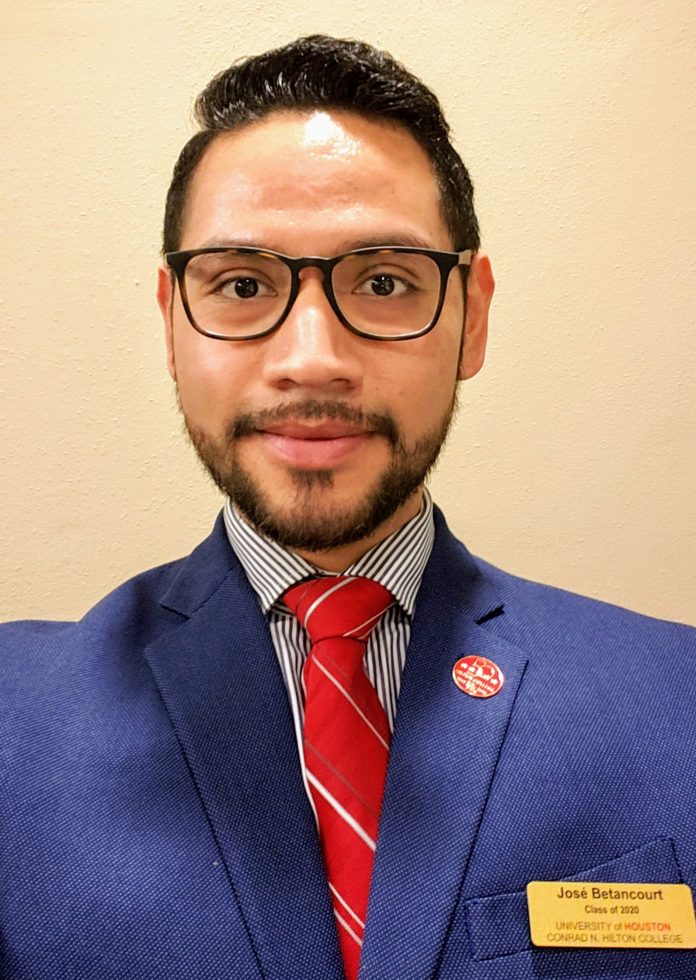 Jose Betancourt is building a career centered on helping people. Born in Mexico, Betancourt moved to the United States with his family when he was seven years old, graduated high school in Houston, and began his college studies at Baylor University, where he had his sights set on becoming a doctor. While a student, he worked a variety of hospitality jobs to support his education. Somewhere along the way, his vision of a career in medicine shifted to a career in hospitality.

“I went from having a perspective of wanting to help people at their worst to wanting to help people at their best, which is what a lot of what hospitality is,” Betancourt explains. “In my Latino culture, we’ve always been about making people feel at home and in a welcoming environment. That’s what I love most about the hospitality industry that drew me in—it holds some of the values that I grew up with.”

Betancourt won this year’s Hyatt and Opening Doors scholarships given through the American Hotel & Lodging Educational Foundation (AHLEF), which awarded a total of $1.3 million in hospitality scholarships in 2019. Those scholarships are helping to support his goal of earning a degree from the University of Houston’s Conrad N. Hilton College of Hotel and Restaurant Management. LODGING spoke with Betancourt shortly after he wrapped up his junior year about his aspirations for his final year of college and beyond.

A few years after he left Baylor to find a new path, Betancourt’s father passed away. He then moved to San Antonio with his partner and picked up his education at the University of Houston, which offers a hospitality degree through its San Antonio campus. As he attended classes, Betancourt also held a variety of positions in hotels and restaurants, eventually working his way up to hotel food and beverage supervisor.

“I think sharing my struggle can help those who get discouraged to continue their education despite their circumstances.”

During this time of living and working in San Antonio, Betancourt witnessed the impact of new hotel supply on the entire market. He saw an opportunity to help lift occupancy on a larger scale rather than at an individual hotel level by applying for a position at a destination marketing organization and pursuing that path after graduating. “I want to be more involved in that aspect of the industry—bringing people around the world to visit here to help with the hotel occupancy throughout the whole city,” he explains.

From hotel supervisor to working on a citywide scale to boost tourism, achieving higher-level positions is more than a personal goal for Betancourt—he also wants to serve as an example for others faced with barriers in their careers and education. Last Fall, Betancourt was among a group that started a chapter of the National Society for Minorities in Hospitality at the University of Houston’s San Antonio campus. “It wasn’t until then that I found out that there are not very many minorities in executive-level positions, even though minorities are the majority of the hospitality workforce,” he explains. “There are some things that keep us from moving and achieving the same things that our counterparts do. I want to be an example for those who question themselves and don’t think that it can be done.” He adds, “Where there’s a will, there’s a way—and there are people who want to help you.”

Betancourt shares that he has had to overcome his own personal barriers to pursue his education and career—including losing his father and a medical diagnosis that he says has been a struggle for him. “I am beyond grateful for this scholarship—it means having to be less stressed about my situation and being able to focus on my health and my education,” he says. “I think sharing my struggle can help those who get discouraged to continue their education despite their circumstances.”

In his future career, Betancourt says he would like to be in a position where he can pay it forward. “I feel very privileged to be able to have this opportunity and to be given this scholarship to assist in my education, my goals, and my life,” he says. “Because of that, I would like to one day be part of an organization that passes on. Just like I’m going to be getting a scholarship, I want to be the person or part of an organization that gives out scholarships to those in need who want to pursue their education.”