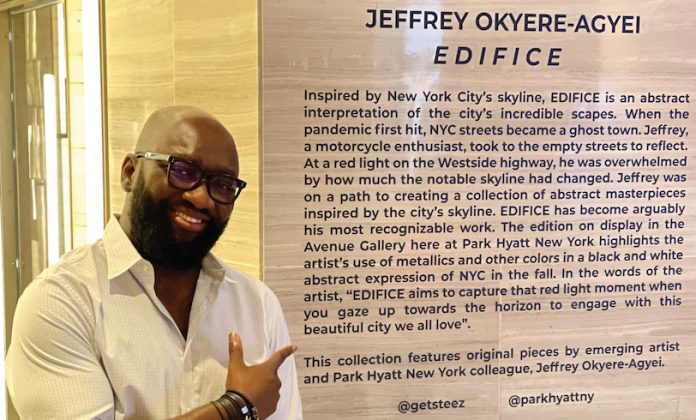 Jeffrey Okyere-Agyei views much of life from the perspective of an artist. Originally from Accra, Ghana, Okyere-Agyei is a self-taught contemporary abstract artist whose work was recently on display at Park Hyatt New York, where he is a bellman and a recent artist-in-residence of the hotel. He shared with LODGING highlights of how he evolved from a psychology graduate student with a job in hospitality to a hospitality student pursuing a career in the industry while also gaining a measure of recognition and support from Hyatt and inspiration from his adopted hometown of NYC.

The Ghana native tells a story familiar among hospitality industry devotees: He came to New York City some 15 years ago to continue studies in psychology, stumbling into the luxury segment of the hospitality industry as a means of support while in school. His fascination with the world he thus entered, he says, plunged him into “a rabbit hole” that prompted him to switch his studies from psychology to hospitality management. “I found myself in an environment totally unlike my own hotel experiences—that is, just a place to sleep. Here, there was the intricate collection of information designed to give even a guest staying for a single night the feeling of a home away from home.”

Although he worked in various positions at other five-star hotels—including the Mandarin, the Plaza, and the Ritz Carlton Central Park South—Okyere-Agyei didn’t hesitate to accept when a former co-worker approached him in 2014 about the bellman position at the newly opened Park Hyatt New York. “It offered me the opportunity to be a real part of the team opening a luxury property in the world’s biggest hospitality city in the world. I was gratified that my colleagues showed me so much respect in terms of what I brought to the table based on my experience in the segment. It also gave me a sense of purpose to help bring along team members without that experience.”

Then, of course, there is Okyere-Agyei’s work as an abstract artist. Although he has no formal training in visual arts, he says, “I’ve been immersed in art my entire life, starting with growing up in Ghana, where art is part of everything—from our 96 languages, to our food, to sculpture, to dance.” Still, he says, it wasn’t until he came across an abstract magazine that he found his own place in the visual arts. “Abstract art just had a different vibe when it came to how it made me feel emotionally, what the colors did to me visually,” he explains.

His most recognizable work, the EDIFICE collection, which was on view at Park Hyatt New York’s ground-level Avenue Gallery through the end of November, celebrates the city he has grown to love. He says this collection is unique in two main ways: First was its timing; it was painted during the pandemic, when much of New York City was devoid of the traffic that normally made riding his motorcycle there unsafe. Then, too, was the metallic media he used to depict the famed skyline, which, he observes, has changed significantly in recent decades. “While riding around the newly quiet city, it hit me how much the city skyline has been changing right before our very eyes. That was the beginning of the vision, how I started that whole process of creating my own interpretation of what the city skyline currently looks from various points.”

Okyere-Agyei says that the very fact that the work of a Hyatt employee is on display says a lot about Hyatt as a brand. “It demonstrates what it means to support the dreams and aspirations of employees as individuals beyond what they do in their jobs.”

Okyere-Agyei reflects on how the year-long shutdown beginning in March 2020 acted as a catalyst for his feelings about his adoptive city, his appreciation for living in the moment, and desire to express himself professionally and artistically. He says he is not alone in this response. “Many of my colleagues who were passionate about hospitality as both a concept and an industry before COVID have a keener understanding of how important it is to hone that craft and really put out your best every single day. We need to be in this very moment, to know it’s a gift to appreciate, because, as COVID taught us, you don’t know when that may be taken away from you.”

SIDEBAR: The Creative Process at Work
As Park Hyatt New York Artist-in-Residence Jeffrey Okyere-Agyei can tell you, the creative process just can’t be forced. He says, for him, EDIFICE, an abstract interpretation of the New York City scapes, didn’t feel like work at all. “It just came to me so easily and naturally. Although it was done during the pandemic shutdown, it ended up looking like a collection that was put together over several years. When you look at the evolution of it, there are twists and turns in terms of the different renditions that I’ve done over the past year or so.”

He says, too, that the impetus was, in large part, the frame of mind he was in at the height of the COVID-19 pandemic. “We were all trying to make sense of what our next steps would be. When were we going to return to work? When will things return to normal? So, I decided to just make the best out of it, put my creative thinking cap on, and make the best art I can.”