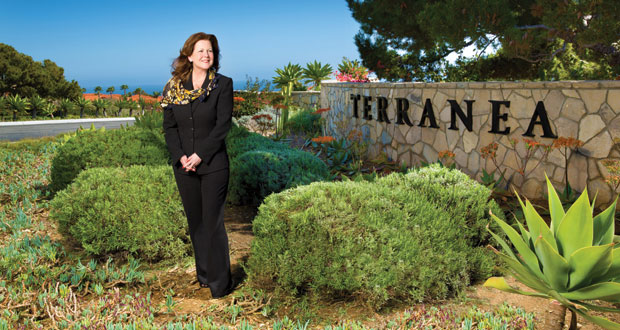 The Great Recession, which began in the late 2000s, impacted most people working in the hotel industry. However, few felt this period of economic turmoil as acutely as Terri A. Haack, president of Terranea Resort, a Destination Hotel managed by Two Roads Hospitality. In 2007, she was tasked with leading the development of the resort—a $480 million project. “When we began construction, the economy was booming,” she says. “Everything was good, with money flying everywhere; then, a year and a half later, the bottom had fallen out. Our construction lender went bankrupt and we didn’t have any working capital.”

It was do or die, but Haack made it work. The resort opened in 2009. “It was the greatest challenge of my career, but I am so proud of the work that we did at Terranea,” she says. “Today, we’re thriving. We went from having zero employees to employing 1,431 associates. We transformed a hostile atmosphere into a corporate darling that gives back.”

Haack uses the platform that Terranea provides to the benefit of her community. Recently, Terranea underwent a massive renovation, during which she convinced its owners to donate 380 rooms worth of furniture to Habitat For Humanity, rather than sending it to a liquidator. “You can’t be successful in business and not see the big picture,” she claims. “And in hospitality, you cannot excel unless you have a need to nurture and help others. Finding ways to take our success and better our community is integral to growing within our jobs.”

And Haack isn’t just passionate about giving back to the community; she has also made the furthering of women in hospitality a key component of her career trajectory. Earlier this year, Haack spoke at the inaugural conference held by the Castell Project—an organization dedicated to advancing diversity in hospitality industry leadership. She also currently serves as president of the American Hotel & Lodging Association’s Women in Lodging group.

Additionally, she helped found a similar group at Two Roads Hospitality. “It’s so important to give women a platform to explore what they can do and be, and sometimes they just get stuck. It’s very difficult to maneuver into the upper levels of the hotel industry because there’s no one there to guide them,” she explains. “It’s the responsibility of the women who have already achieved success to help other women take their rightful place in the future of hospitality.”

Marriott GM Erica Qualls-Battey on Supporting Her Associates and Industry

Hyatt Grows Boundless Portfolio of Lifestyle Brands in the Americas