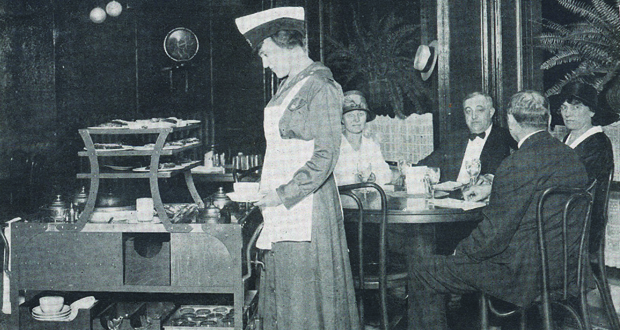 In a nation seeking parity between male and female workers, lodging has proven to be a success story. According to a 2014 report from the National Bureau of Labor Statistics, the hospitality labor workforce in the United States is 51 percent female. While this isn’t surprising to people who work in the business, this statistic is supported by the enrollment figures of many hospitality colleges and schools in the nation, where women make up 50 percent or more of the student body. However, history shows that it took years for this equality to become not just the norm, but also generally accepted.

The idea of a female hotel worker, let alone owner, in the 19th and early 20th centuries was unusual. Historically, however, women stepped up in the lodging industry when needed. The “Harvey Girls,” who worked as waitresses at the Fred Harvey hotels in the West, are perhaps the best known 19th century example of women in hospitality. However, they weren’t the only ladies thriving in this industry. In 1890, Sarah Leeds was named manager of the Haddon Hall Hotel in Atlantic City, N.J., and in 1899 in Yosemite, Calif., Jennie Curry, along with her husband, founded Yosemite Curry Village, the first inexpensive housing for tourists in the Yosemite Valley. At first, the Currys only rented out tents, but later cabins and rooms were added to the property’s offerings.

While some women were able to find success in hospitality in the late 1800s and early 1900s, the eruption of World War I created the first significant opportunity for large numbers of women to fully participate in the lodging industry. Ladies came to hospitality’s rescue when hotels were suddenly devoid of the majority of their male staff in 1917. They were sorely needed, as wartime had created a booming economy.

While hotels were desperate to fill the labor shortage, they turned to women somewhat reluctantly. The 1917 and 1918 issues of Hotel Monthly are filled with owners and managers describing positions formerly held by men but now filled by women. “Women’s work has extended to room clerk,” wrote one North Dakota hotelier. An upstate New York manager noted, “Elevator girls have come to stay, the wages are the same, and the women are, if anything, more efficient.” A hotel in Emporia, Kansas, notes hiring a woman to work as a room clerk and cashier for the dining room.

John Wiley, publisher of Hotel Monthly, noted that employment of women and their contributions was one of the biggest developments in lodging during the war. After the war, the number of women in the industry decreased, but not to prewar levels. Women who would later own, operate, and play leadership roles in the hotel industry had gotten their foot in the door. While World War I proved that women were ready to play a more active role in the hospitality business, it still took women getting the vote (in 1920), another world war, and society’s changing attitude toward women’s role outside the home to achieve the 50 percent parity that the industry enjoys today.

Top photo: A woman serves guests from the pastry wagon of Chicago’s Grand Pacific Hotel in 1918.