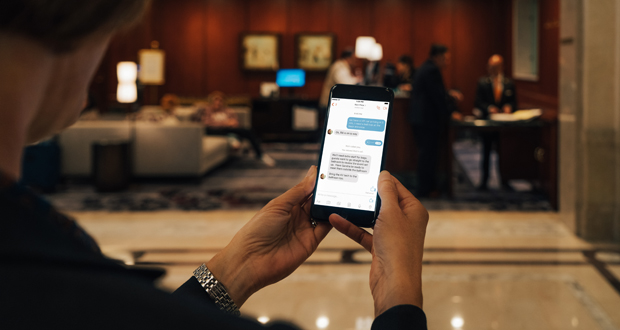 Communicating with hotel staff while on-property—whether they are on the grounds or in a guestroom—has long been a challenge for hoteliers. Telephones, radios, and email each have their own limitations. Housekeeping staff, for example, aren’t sitting in front of a computer or checking email all day, and radios can add distracting noise to shared hotel spaces. Meanwhile, front desk staff aren’t necessarily able to answer a manager’s phone call when focusing on greeting and serving guests. For quick, two-way exchanges of information from any place at any time, hotel staff are turning to text messaging.

The ubiquity of personal mobile devices is already changing how hotels communicate internally, whether that communication is initiated by management or not. More and more, hotel staff are turning to texting and consumer messaging apps like Facebook Messenger and WhatsApp to have conversations with each other. Stacey Epstein—the CEO of San Francisco-based Zinc, which creates communication platforms for deskless workers—says that people prefer text messaging rather than emailing and calling. “There a reason for that,” she explains. “It’s quick, it elicits an immediate response, you can clearly articulate what you want to say, and it’s less effort.”

Unlike the rise of email—which started in the business world before inching into consumer’s personal lives—text messaging is a consumer-led trend that is changing how businesses communicate. “Suddenly, people who never really used technology much on their jobs now have a phone in their pocket,” Epstein says. “It’s really created an opportunity to connect.”

The benefits of hotel staff using text messaging are fairly straight-forward—staff can answer questions from managers and keep each other in-the-know no matter where they are on the property. However, Epstein points out that the informal nature of texting through a personal device or using a consumer messaging app comes with some administrative and managerial challenges. For instance, there’s no way to turn off a group message for those on vacation or off-the-clock—a potential liability for nonexempt workers. Similarly, a texting or messaging group is not typically managed by a single individual, complicating the process for adding and removing staff members.

Another drawback, Epstein explains, is the inability to access data and insights from those internal conversations. “The data of what’s going on and these communication patterns is very valuable,” Epstein says. Texting data may be unavailable and messaging data may be owned by the app’s company, which typically harnesses that information for advertising purposes. Companies like Zinc aim to provide a secure and private communication platform with a similar user experience as text messaging, but with the ability to centrally manage those conversation groups, keep a staff directory, and access analytics, among other capabilities.

Even on more formal platform like Zinc’s, the nature of text messaging tends to change how staff communicate. “You walk a fine line between over-communicating and becoming noisy,” Epstein explains. “Deskless workers aren’t just sitting in front of a computer where they can consume long streams of information. They’re busy doing another job—checking in people, cleaning rooms, fixing things on the property, getting ready for an event—they can’t tolerate a lot of back and forth conversations.”

For that reason, Zinc offers etiquette training for using text messaging in a hospitality setting. “There’s a whole philosophy behind the etiquette,” Epstein explains. “For those employees who want to chit-chat or talk about things outside of work, it’s ok to have that because sometimes that can drive some engagement and culture. But hoteliers need to create separate groups for that and give people the ability to mute those groups.” Epstein says that it’s important for hoteliers to ensure that the technology isn’t overly distracting, preventing staff from finishing a task or interacting with guests.

The future of internal communications at hotels will be driven by mobile devices, Epstein says. Voice-activation and push-to-talk communication are also on the horizon. Epstein sees a future where WiFi-powered voice and video calling makes traditional phone calls obsolete and one app replaces radios, telephones, and texting. And that future, she adds, is not too far away.

Marketing LODGING Staff - May 5, 2021
NATCHITOCHES, La. – With the vast majority of event professionals believing that hybrid events will become the new normal, combining the best of digital...

People Robin McLaughlin - May 5, 2021
Environmentally friendly efforts have been at the forefront of the hotel industry in recent years, but “sustainability isn’t a new concept for Highgate,” says...