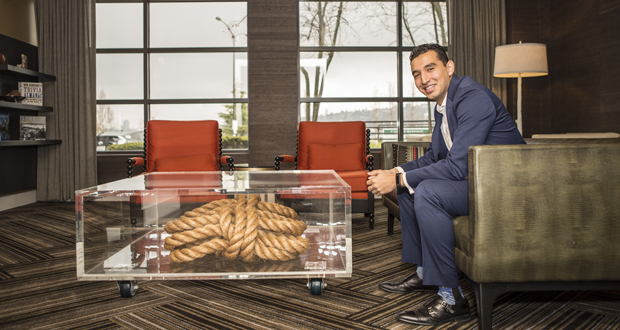 You can see it on their faces. Thanks to an introduction to hospitality and tourism in high school, these savvy, motivated teens and twentysomethings are on their way to a bright future in the hospitality industry.

Seattle’s Chief Sealth International High School runs the competitive Academy of Hospitality & Tourism, which draws in whiz kids who dive deep into the world of hotels and business. Being selected for the program is a coveted honor. “It was the best thing that happened to me in high school,” says 20-year old Yael Piña. “I like being ahead.”

Keyaira Corbray, 17, says students in the academy play a significant role in recruiting younger stars. They spread the word, recruiting ninth and tenth graders. To be selected, students must complete an application, write an essay, and achieve and maintain a high GPA. About 50 seniors and 50 juniors participate in the academy each year.

In addition to the coursework focusing on business skills, Academy Coordinator Jane Hendrickson says students in the hospitality program often get to work in hotels as paid interns. “As a high school student, it’s a nice incentive,” she says. Students submit résumés and each hotel property picks four or five students to interview. Just one or two of those candidates will receive job offers. “Internships are competitive,” says Kaitlin Andrade, 17. “It’s a long process and a big accomplishment.”

Sean O’Rourke, the general manager of the Courtyard Seattle Downtown/Lake Union, says he started participating in the hospitality program to hire interns in 2007. He was seeking an opportunity to make a positive impact in his community, he says. Those first student interns turned out to be hospitality superstars. “I hated to see them go,” O’Rourke says with a laugh. “At the post-internship reception, I couldn’t tell the difference between the college and high school students.” His team offered the student interns part-time jobs so they could continue their education and continue to add value as staff members.

Setting Students Up for Success
At ages 16 and 17, the students at Chief Sealth’s Hospitality Academy are already learning about careers in the industry. They take field trips to learn about different hospitality organizations, build their own LinkedIn profiles, perfect their résumés, and network with potential employers and mentors.

Graduates of the program say many of their non-academy friends are working in smaller retail or coffee shops or in part-time work-study jobs. In contrast, the academy has given them the opportunity and tools they need to land positions at larger corporations, allowing them to climb the ladder of success a bit faster than their peers. Internships through the academy have given these young adults skills and experiences that set them apart from their peers.

“We just got more experience and that made us mature more,” says Alexandra Santos, 19. Santos explains when she started her internship at O’Rourke’s Courtyard, she was shy and didn’t like talking. Regularly interacting with guests at the hotel brought her out of her shell. Santos says she is finding herself connecting and branching out more with guests as she clocks in and out at the hotel each day.

The teens described a certain ebb and flow of hospitality, and they say they learn a lot from the hotel guests. Andrade’s favorite guest was an Argentinian woman who was staying in Seattle before and after an Alaskan cruise. The guest needed help navigating the Uber app and she was more than happy to connect the guest with transportation. Andrade says the guest returned from the cruise and bestowed her a charm purchased on the trip as a thank you for her assistance. “It’s really rewarding when people go out of their way to reward you,” says Andrade.

Imani Carey, 17, says her favorite guest was a woman who was celebrating her 90th birthday at the hotel. Each birthday, the woman’s tradition was to buy the day’s newspaper as a keepsake. Unfortunately, the guest had missed the paper on her actual birthday and asked Carey if she could find one. Carey says she looked everywhere on the property. She went through all of the recycling to no avail. Finally, a co-worker went to Pike Place Market and bought the day-old paper and Carey was thrilled to present the keepsake to the birthday girl. “It was a good feeling to make her day better,” Carey says.

Santos’ favorite work memory was helping a hotel guest who was injured at a light rail station during her Seattle visit. When the guest returned to the hotel, Santos brought her a free cup of tea and took the time to talk with her. The next day, the guest brought Santos flowers as a thank you.

But not every day on the job is perfect. The students say as interns they make a lot of mistakes. Carey explains that she once accidentally shattered a lamp in a guest room while moving a roll-away bed. The students say they ask a lot of questions and sometimes learn lessons the hard way. Each credited their managers and other staff members for being understanding and encouraging. “The hardest days teach me to get back up again,” says Ashley Lew, age 20.

Andrade, Lew, and Santos continue to work at O’Rourke’s hotel in the café and at the Front Desk while they complete their educations. Piña has a bit of a different story. Piña went through the Academy of Finance at Chief Sealth instead of the hospitality program. A self-starter, he sought out a mentor in hotelier David Watkins, the general manager at the Inn at the Market in downtown Seattle. Piña has now been working for Watkins for two years as a houseman, bellman, valet, and at the front desk. He says Watkins has been showing him the business side of running a hotel, which appeals to his personality and his career dreams. “[Watkins said I’m] going to start at the bottom so I know everything,” he explains. A student at Bellevue College, Piña hopes to work for a larger hotel corporation in the future.

At 17, Andrade says she is still “figuring some things out” and  loves hospitality because “everyone is so nice and helpful.” Andrade is contemplating attending college at the University of Washington’s Foster School of Business, pursuing a career as an event planner for a hotel or convention center, or in hospitality management. She hopes to be able to travel and to work out of different locations. And because there is a variety of hotel types and sizes all over the country, she feels like she has options. “I could literally do any job in hospitality,” Andrade says, beaming with confidence.

About the Author
Jillian Henze is the local communication manager at the Washington Hospitality Association.

Photo: Yael Piña is a student at Bellevue College who has worked at the Inn at the Market in downtown Seattle. (Photo credit: Lisa Ellefson)