Home Industry News Conferences and Events Getting to the Other Side: Association Leaders Put Their Heads Together on... 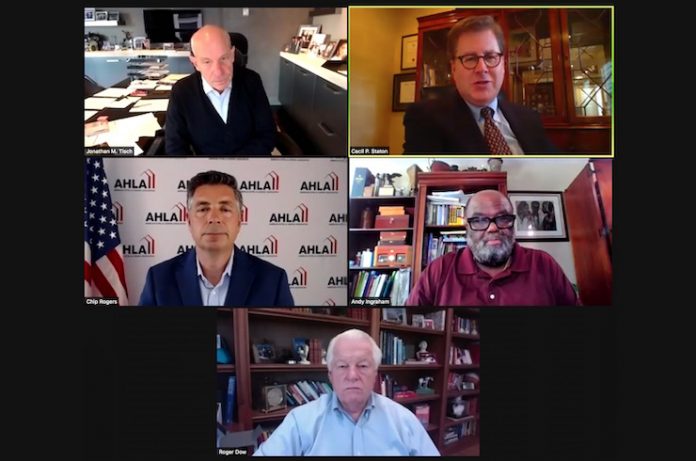 As has become nearly de rigueur since the pandemic, the recent 42nd Annual NYU International Hospitality Industry Investment Conference was held virtually November 6-12 to provide the latest information on trends and forecasts. A panel discussion moderated by Conference Chairman Jonathan M. Tisch, chairman and CEO of Loews Hotels & Co., and co-chairman of the Board of Loews Corporation, featured a distinguished group of hospitality association leaders addressing the topic “Policy Matters: What Lodging Needs to Know Now About Public Policy.” Among them were Roger Dow, president and CEO, U.S. Travel Association; Andy Ingraham, president, founder, and CEO, NABHOOD; Chip Rogers, president and CEO, AHLA; and Cecil P. Staton, president and CEO, AAHOA. Their discussion focused on how the pandemic has underscored more sharply than ever how public policy directly impacts the lodging and travel industries, emphasizing the need to support owners—most of whom can be considered small businesses owners—to help them maintain their businesses and keep employees employed in the short term while working to insure a future in which the public will feel it is safe to proceed with their desire to travel again.

With the election behind it and the announcement of a promising vaccine, the group agreed that it is high time to press Congress and the new administration to move forward on measures to rescue the hospitality industry.

A former State Senator of Georgia, Staton stressed the need to engage in advocacy to help what is expected to be a divided Congress reach an agreement to move forward with a much-needed stimulus that would offer economic aid to the industry, which he says is dealing with an unprecedented liquidity crisis. “We’re advocating for a second round of PPP, but other things can be done, too, to help give hoteliers the chance to remain standing on the other side of the COVID crisis. Let’s hope people of goodwill will come together and reject some of the extreme partisanship and work together to get something done.”

Ingraham pointed out that with property taxes soon due in a year in which earnings were largely nonexistent, the future of owners and their employees may depend on aid other than loans, saying, “You can’t get more loans on debt you can’t pay.” Noting that the government bailed out airlines and banks in the past, he said, “Perhaps with a new set of eyes, there will be new opportunity to make our elected officials understand we need some help to make sure this industry stays afloat, something to give us hope.”

Noting how politicized Congressional negotiations relative to a second rescue package had been prior to the election, Rogers said, “Now without the election as an excuse, Congress has the opportunity to do what they should have done from the beginning.” It is his hope that the next package will rectify what he regards as failures of the Main Street Lending Act for the industry. Rogers also pointed to ways owners can help themselves by adhering to CDC safety guidelines. AHLA’s Safe Stay standards, which are based on the latest guidelines, he said, send the message that it is safe to travel; the association is devising similar standards for gatherings.

Dow’s message to Congress focused on the link between overall prosperity and travel—thus the need to support the industry until it is back on its feet, possibly aided by a proposed $4,000 tax credit for family travel and meetings. “I need them to understand if they can bring back travel, everything else follows, because travel is the front door to economic development.” This, he said, can start with planning. He described his organization’s travel promotions starting with the “Let’s Go There” campaign, which will be followed by “Let’s Give the Gift of Travel.” These campaigns, he said, will lead up to National Plan for Vacation Day on January 26. Later, he says, “Let’s Meet There” will be directed at event and meeting planners.

All described how the future of the industry in the longer term requires maintaining its reputation as one offering exceptional opportunities, including prospects for those who start at the bottom. Ingraham called the keys to keeping interest in the industry—despite the current challenges—advancement, imaging, and opportunity. “We need to be creative, show more young people that this is not a dead-end industry but one that is going to continue to grow—not just in U.S., but all over the world.”

Rosewood San Francisco to Open in 2026