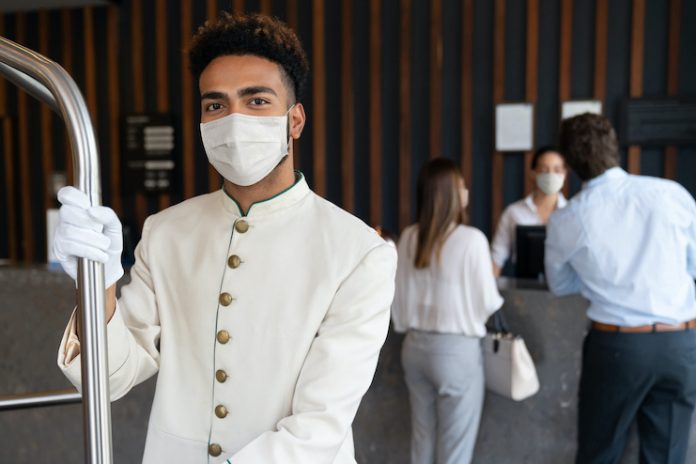 As the U.S. hospitality industry begins ramping up after a year of hand-wringing as well as hand washing, it is already apparent that the road back is likely to be uneven. Sharing with LODGING their observations and expectations related to hotel industry recovery from their respective perspectives at Aimbridge Hospitality were Liz Uber, senior vice president of operations, select-service, Rob Smith, executive vice president of operations, full-service hotels and resorts. Among the issues they discussed were the labor shortage bedeviling their efforts to meet staffing demands while business is restricted to specific days, some of the differences in their segments that affect the path forward, and how they are adapting to yet another set of realities.

Reflecting on the pandemic, Uber, who is responsible for the overall performance of a hotel portfolio of primarily select-service and extended-stay properties under premium lodging brands, says, “I would say this past year has been unprecedented beyond anything we could ever fathom. We had no idea how long it was going to last or what the impact would be. I have personally been blown away by the effort and care our staff demonstrated to keep their hotels open, even though many had to make tough decisions about their staff. They were working long hours doing whatever it took without regard for their job description. I have grown to respect, admire, and appreciate them more every day.”

Smith, who is responsible for managing all facets of full-service branded and independent hotels and resorts in the Americas and the Caribbean, also notes how on-property staff rallied and flexed to keep up with the kind of “constant change” that was the hallmark of the period that commenced with lockdowns in March 2020. “Furloughs were followed by layoffs as we ran big properties with skeleton crews and struggled to provide at least some version of the services our guests expect.”

When demand began picking up once again and the opportunity to bring back staff presented itself, many employees who were furloughed or laid off were not eager to return, leaving the industry with a labor shortage.

On this, Uber says many have found other employment in other industries or aren’t ready to return to the workplace for myriad reasons including fear of contracting or spreading the virus or due to family consideration. Smith mentions, too, a commonly held belief that government subsidies “make it worthwhile to stay home.”

Smith describes some of the approaches taken to meet the current need—one that is complicated by uneven demand; business is largely limited to certain days of the week in the full-service and luxury hotels he oversees. “Because we don’t have or always need the number of people in frontline positions we had previously, we’ve needed to do flex scheduling. We’ve also had to break jobs down to make them acceptable to rehired staff accustomed to working in other areas such as food and beverage, who didn’t want to clean rooms. It turns out, they just didn’t want to clean bathrooms, so to make that work, our regular housekeeping people began doing only restrooms while the F&B folks would strip beds and vacuum floors.”

To fill the void created by those who have left the industry, Smith and Uber discuss their efforts to recruit new staff and reward those who have remained committed to their properties and the industry. Uber says while the job of recruiting would fall to GMs in normal times, her sales team is taking on the task of recruiting, including through non-profit organizations. Smith comments, too, on how the decision of some to leave the industry has created an opportunity for others. “Many millennials who thought they would be stuck behind long-term managers waiting for positions to open welcome the chance to advance their careers as things open up.”

Both Smith and Uber see an upward trend driven by pent up demand and widespread vaccination to continue. As for who is behind the ramp up, both agree that demand is mainly from leisure travelers. “Things are still slower in our predominantly corporate markets—e.g., downtown San Jose—where we rely on corporate/convention business, but we are definitely seeing leisure demand where we didn’t see it before,” says Uber. Smith finds that even the group business that’s beginning to return is more leisure-based. “We’re not yet seeing corporate or incentive groups—but more association or SMERF.”

Looking to the future on the full-service side and resorts side, Smith makes his projections mainly in terms of quarters, saying, “We don’t look at years anymore.” He reports a surge in resorts, which don’t rely on mid-week demand, and expects a comeback in corporate and incentive business in Q1 of 2022. “I don’t think 2022 will return to 2019 levels overall, but I think it will hit 2019 levels by Q3 and Q4, and surpass them in 2023.”

So, when will businesses be ready to replace those relatively cheap and easy Zoom meetings with traditional face-to-face versions? Uber expects the big industries to lead the way. “I think it will take one or two of those big industries or companies to relax their restrictions for everyone else to follow.” Smith agrees, saying, “At some point, they will realize Zoom just doesn’t compare to a face-to-face sales call. Also, the fact is, business travel is more fun than staying home all the time.”

Also, in the spirit of fun, Smith believes there will be a resurgence in F&B sooner than later. “People want to get out and eat, celebrate, have family and friends gather for holidays and events.” Uber adds that this can be gleaned from feedback at select-service hotels as well. “People are ready to sit at a bar, not just their room.”

Centralized Data Hubs: How PMS Can Help on the Road to Recovery

Ask Anthony: How to Choose Which Technology to Implement in Hotels