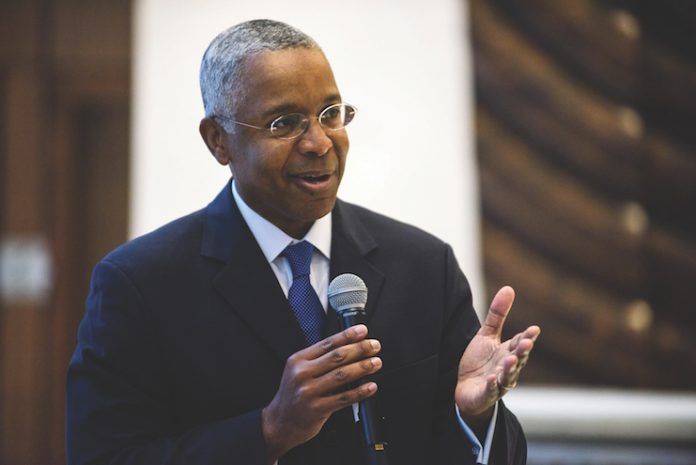 Capstone Development founder, president, and CEO Norman K. Jenkins recalls “it wasn’t unusual to be the only person of color in the room” during countless meetings while ascending through the management ranks of his corporate career. Jenkins spent five years with McDonald’s prior to joining Marriott International, where he spent 16 years. While at Marriott, he spearheaded the Diversity Ownership Initiative, an innovative educational program that reached out to successful leaders in other industries to make them aware of investment and ownership opportunities in hospitality.

As he told LODGING, “I am pleased to be honored with the LODGING Magazine Diversity & Inclusion Award, and I am humbled to be the inaugural recipient. While this award recognizes my past contributions, I’m not finished. Promoting diversity is a lifelong commitment and passion that will always be an integral part of my life.”

Looking back, Jenkins considers himself fortunate that his parents were willing to sacrifice so that he could obtain a college education; but there were strings: “They scraped together every nickel, but my commitment to them was that I would select a major that would ensure immediate employment upon completing college.”

Thus, with his Howard University accounting degree in hand, the newly minted CPA headed not for the big accounting firms, but a really big food and beverage company—McDonalds. “The accounting firms didn’t appeal to me. McDonalds seemed like an exciting opportunity. It was a growth company; it was a brand that was well-recognized; and in the back of my mind, I said to myself, ‘Gee, if I join this company and learn this business, perhaps in 20 years, I’ll own a franchised restaurant.’”

“Promoting diversity is a lifelong commitment and passion that will always be an integral part of my life.”

McDonalds, he says, turned out to be an ideal place to begin his career in hospitality. “McDonalds is a finance-driven organization, so I was able to refine my finance and accounting skills.” But, he says, what it also did was introduce him to both real estate and franchising. “I came to understand that McDonalds was as much a real estate company as it was an operating company. Transactions were creatively structured, where the company would own the underlying real estate, while the franchisee paid for it through their base fees. I found it to be a fascinating way to structure deals.”

After being recruited by Marriott in 1992, he performed internal audits for Marriott’s different businesses. “Performing audits allowed me to view the company from 20,000 feet. This resulted in an accelerated education of this large and complex organization, which then included hotels, corporate cafeterias, airport F&B concessions, airline catering, and retirement communities,” he describes.

Jenkins recalls being “intrigued” by the first 100+ page franchise document he reviewed. “I had all these questions: How did this hotel come to exist? Who made the determination that this hotel would be located in this particular location? How was it financed?”

His real question was, “Who drove these deals?” Learning that it was the real estate developers who were the in-house drivers of this business, he began to see a path from his work inside Marriott to an entrepreneurial one. From that point on, Jenkins set out to learn all he could to prepare for a future as an entrepreneur.

Jenkins remembers “reluctantly” accepting a promotion that involved “cleaning up” an underperforming area of the corporate tax department. “Although I had been reluctant to take that job, it was probably one of the best roles I ever had, because I was required to manage a large group of people and had great exposure to senior leaders—all of which led to the opportunity to work in development finance, the area that really focuses on assessing new opportunities for the company.”

The transaction in which the Renaissance Hotel Company was acquired included two additional brands—one of which was Ramada Hotels. The outside CEO Marriott brought in to head it was required to appoint a Marriott CFO. Because Jenkins had worked on the acquisition, he was tapped for the job of CFO of the Ramada International business.

With the ultimate goal being to sell the Ramada business at some point, he says, the team ran the business “like an entrepreneurial shop.” “We developed hotels, ran our own investment committee, terminated hotels for nonpayment of fees, and ultimately grew the brand to over 200 hotels, and sold it, as intended.”

The next step in his career/entrepreneurship training involved working directly with domestic owners and franchisees to salvage “deals that had gone bad,” learning how different companies raised capital, structured their organizations, and assembled their teams, while working with former Choice Hotel CEO Steve Joyce on franchise services.

After being made a corporate officer of Marriott International, Inc., and promoted to senior vice president, North American Lodging Development, Jenkins settled into his final position as an employee, leading complex development projects including transaction structuring, financing, and real estate acquisition. “It was an exciting time during which I learned a great deal. I was asked to assume responsibility for the Marriott Marquis project in Washington D.C., and was able to secure a $200 million municipal subsidy from the city for a $520 million deal,” he describes.

But at that point, he felt he’d reached an inflection point. “I felt it was my time, that if I didn’t go out on my own then, I might never do it.” Although it was what many would consider a terrible time—2008, during the Great Recession—he thought the time was right for him; he had worked internally on the Marriott Marquis transaction and wanted to move to the other side. So, after obtaining the support of senior executives at Marriott, he formed Capstone, and, with Quadrangle Development, co-developed the Marriott Marquis.

Not that it was easy—especially at first. “When I launched my company, things didn’t simply unfold as planned. To secure debt for the Marquis, we approached every bank we knew and came up empty. Ultimately, we ended up attracting an offshore partner to join the deal. With our newly formed partnership and participation by the city, we were able to begin the project with 100 percent equity. But, the Marquis failed to begin construction immediately, so I was forced to hustle, find other deals, and was even hired by a leading hedge fund to provide hospitality consulting services. As I look back, I left a relatively secure situation for one with no safety net. To date, it’s worked our pretty well, and I haven’t regretted a single day.”

Though his hospitality career has been diverse and he’s held many different positions, Jenkins has always championed diversity. He says that it’s not just that promoting diversity is “the right thing to do;” it also makes good business sense. “Diverse organizations simply work better. If everyone looks the same, acts the same, thinks the same, you’re likely to get the same outcome. Hiring diverse associates at Marriott—people with different opinions, skills, and talents—made us a better company.”

But Jenkins also points out that companies known to support diversity actually get more than their share of deals. “The municipal RFP for the city of Washington D.C., didn’t just want information on our great brands; we had to show our commitment to diversity—how many people of color were at senior levels, our spend with diverse companies, the organizations we supported, etc.”

“Companies with diverse ownership attract other sources of business that they might not otherwise.”

He says, too, that companies with diverse ownership attract other sources of business that they might not otherwise. “When we opened Marriott Marquis, the Congressional Black Caucus immediately switched all their business—including a big week-long event every fall—to our hotel.” Others that switched were Black CPAs, the Black Chamber of Commerce, and several large national fraternities and sororities.

He says the Diversity Ownership Initiative he championed actually had two tracks. First was the effort to bring in people with the money to invest in properties—either as investors or owners—who just didn’t consider hospitality. “There were a number of successful women and people of color who didn’t recognize that you could own a branded hotel. We sought out individuals who had achieved success in other industries and educated them about investment opportunities. The initiative was a success; it doubled the number of diverse-owned Marriott hotels over a three-year period. As for that second track, Jenkins says, it was aimed at potential future investors. “I took meetings with hundreds of people who weren’t yet qualified to be owners or franchisees, but I thought it was important to spend time with them and explain what it would take, letting them know how to prepare as I did—both from a skill set perspective and a capital perspective.”

Jenkins also never forgets that he’s been lucky. “Along the way, many people took an interest in my career and I benefited from the advice of several great mentors, particularly during my time at Marriott.” While working, Jenkins attended school at night, earning his MBA from George Washington University. But he says hospitality remains an industry that rewards strong performance—even among those without the opportunity or desire to take the educational road to success. “What I love about this industry is that you can rise from the lowest to highest level—even without a college degree. I always try to encourage young people to give this industry a look. I’ve seen so many people who are smart and aggressive but weren’t interested in attending college; yet they were still able to work their way up into leadership and management positions. There are many avenues for success in lodging. I’ve always appreciated that it doesn’t matter where you begin in this industry; there are financially rewarding opportunities for anyone willing to give it their all.”