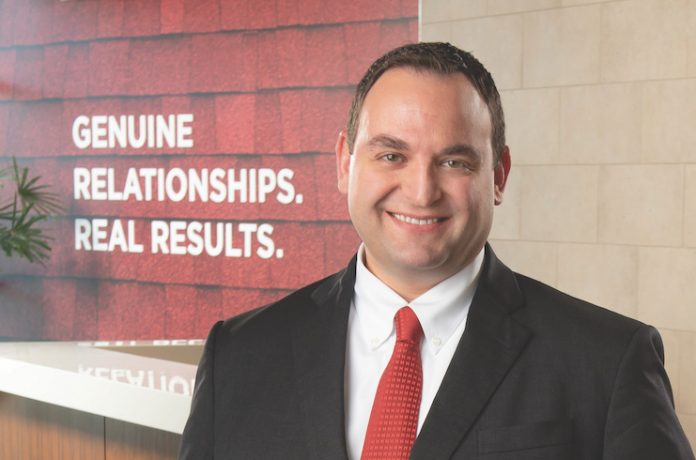 Red Roof’s President George Limbert was recently tapped for the top job after serving as the company’s interim president during a period that has included the worldwide pandemic. Limbert, who holds a law degree, shared with LODGING how, after joining the company as corporate counsel in 2013, he became the right man for the job of steering the company through what he called “the biggest crisis the hotel industry has ever seen.” He also described how Red Roof consciously geared decisions in the early days of the pandemic toward remaining open and surviving, and how the company’s plans going forward—which include rolling out a prototype for its newest extended-stay brand HomeTowne Studios—are designed to apply lessons learned from the pandemic and the continuing labor challenges to best serve guests, team members, communities, and other stakeholders.

Limbert wasn’t the first in his family to venture into the hospitality industry; that would be his grandfather, who, with a partner, had the first La Quinta franchise in their home state of Ohio. His family also owned a Sheraton in Columbus, where Limbert later attended Ohio State University. He says he took on the typical “hotel legacy kid” jobs at his family’s full-service Holiday Inn, and throughout childhood, received remodel castoffs such as bedroom furniture and his very first television set.

When Limbert began his professional ascent at Red Roof in 2013, it was as general counsel at a time when there were 175 corporate locations and 175 franchises. This “balanced” picture, he observes, has changed radically since then, and, in the process, has somewhat modified the company’s vision. “We now have 560 franchises and 108 corporate stores, causing us to consider even more the things that matter most to owners while continuing to keep the guest experience uppermost in mind.”

Limbert describes how his experience at Red Roof provided the underpinnings that enabled him to successfully lead the company at an especially challenging time. “Starting out on the corporate side at Red Roof gave me an understanding of what drives the business, but I then gradually took on the rest—that is, I was handling issues on both the franchise end and on the corporate side.”

He notes that his job as general counsel for Red Roof also put him in charge of crisis management when, in March 2020, what he calls “the biggest in the history of hotels” dramatically changed his role. “I was thrust into the role of leading the COVID task force at Red Roof, which effectively became the leadership of the organization,” Limbert explains. He stresses that the company’s ability to weather the chaos that ensued in the wake of the pandemic “was not by happenstance.” On the contrary, he says, “There was a concerted effort by every core team member to really push through that time, to partner with franchisees and owners, to consciously determine ways to operate while keeping our hotels open just to survive.” The way they did this, in short, he explains: “We pivoted our business.”

These pivots, he says included meeting the changing needs of franchisees and travelers. “We supported franchisees by discounting their fees and identifying and pursuing new markets. We had first responder rates. We had day rates for truckers who needed to get rest and showers while going back and forth to make deliveries, and special rates for nurses who didn’t want to go home at night and risk infecting their families. During this time, we learned, we pivoted, and we survived because we outperformed our competitors.” He says, too, they saw a bigger picture. “From COVID, we learned that our hotels are integral to their communities. We saw how important we were to local agencies who needed to house the homeless or provide a place for people to quarantine.”

Far from taking a moment to breath or revel in his promotion, Limbert continues to devote his energy to seizing the moment and moving the company forward. “I am, of course, humbled and honored to be placed in charge of this iconic brand, and am excited to be in a position to really help grow by enhancing the experience of guests, franchisees, and our team members.”

He says further that he is excited about the future, especially the launch of HomeTowne Studios, a brand that marked Red Roof’s entry into the growing extended-stay hotel segment. In the wake of the pandemic, extended stay proved to be a more resilient segment. The company most recently unveiled a new, efficient prototype for the brand, whose portfolio has grown to include 58 properties totaling more than 7,000 rooms across the United States in the three years since it launched. Limbert says that the company has its sights set on increasing that footprint five-fold over the next several years, attracting developers with a prototype whose design is based on the input of owners, longtime franchisees, and guests to meet the specific needs of today’s remote workers and longer-stay travelers. “We survived COVID, have reset the organization, and are poised for aggressive growth across all of our brands,” Limber says. “There is always work to be done, but we have outstanding franchisees and an experienced and energetic team at Red Roof, so our future is bright.”

Red Roof’s CEO George Limbert says lessons learned from the continuing pandemic and his company’s quick response illustrate the importance of being nimble, being able to recognize and act upon opportunities even during crises, and being open to new ideas and technology.

“Our overall vision for Red Roof—and the key to its future—is all about enhancing value and profitability, of course, but also the Red Roof experience for everyone—our guests, team members, franchisees, and communities.”

Limbert, who says “COVID is here to stay” expects labor shortages to continue indefinitely. However, he says his company has strategies in place to work around these and other challenges. “To help our franchisees and owners cope with labor shortages and turnover, we are focusing on efficiency—for example, using technology to improve the front-desk system, make it easier to clean a room, and adapt training systems to get new employees up to speed.”

He believes, too, that the extended-stay segment will continue to do well, and that exterior-corridor hotels, which had fallen somewhat out of favor in recent years, are back in vogue due to increased pandemic-era focus on social distancing, the safety of outdoor environments, and private spaces.

Limbert says, under his leadership, the company is focused most of all on what he calls “smart growth,” something the HomeTowne Studios brand, in particular, is designed to support. “This new construction will be very efficient to build and operate, with rooms that are easier to clean. The product itself will deliver an exceptional guest experience at a great value.”