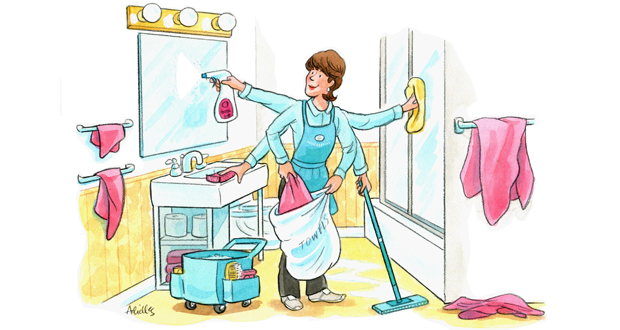 From bed wars to bathroom wars, the hotel industry has fought hard to maintain consumer appeal in the face of change. Over the course of nearly 25 years, the guestroom environment has been transformed quite radically. Beds—an amenity that once required only a box spring, mattress, sheets, and a few pillows—are now one of the greatest symbols of hotel luxury; they stand 34 to 37 inches off the floor and include a plush mattress, one fitted sheet and two flat sheets, a blanket, a duvet cover, and five or six pillows. There have been other upgrades to guestrooms as well. Overall, bathrooms now have more square footage, with many hotels opting for luxury details like granite countertops and tall electric mirrors that require dozens of light bulbs. Even the average television size has increased to a whopping 55 inches.

As a result of these changes, hoteliers are starting to do away with old cleaning habits and adopt new, innovative housekeeping strategies to maintain housekeeper and guest satisfaction. But how can a hotel break through that particular paradigm of routine? Shelton, Conn.-based hotel developer and management company New Castle Hotels & Resorts found a simple and effective solution: Communication.

A little over a year ago, the Courtyard Marriott and Residence Inn Syracuse Downtown at Armory Square in Syracuse, N.Y., integrated a new and improved housekeeping initiative after noticing an uptick in their employees’ minutes per occupied room. When the issue first came to his attention, general manager Jim Wefers suggested going straight to the source—the housekeepers themselves. “We always ask guests, ‘What can we do for you?’ or ‘What do you need?’” he explains, “But that message doesn’t always get communicated correctly to the housekeeping staff. Something gets lost in translation.”

A company-wide new housekeeping initiative was spearheaded by Vince Barrett, New Castle’s vice president, food & beverage/managing director provender. He oversees rooms programs at all of New Castle’s properties, as well as all aspects of food and beverage. “I decided to meet with housekeepers at six of our local properties and hold roundtable discussions with them and their supervisors about an average day and workload,” he says. “I shadowed the housekeepers to see what their routine was like in each room. We concluded that, while the guestroom environment has changed dramatically, our way of approaching cleaning a room had not.” Barrett claims that many employees were forced to stand up on tubs to clean mirrors, go down on their hands and knees to scrub toilets and floors, and stretch to dust the tops of doorways and televisions. “We needed to figure out a way to help these employees work smarter, not harder,” Barrett notes.

Over the following weeks, Barrett developed an entirely new training program designed to help housekeepers understand and perform their work more efficiently. He worked closely with suppliers to provide new tools that would reduce the ergonomic impact on housekeepers’ bodies. These “tools” included a wide range of products, including microfiber cloths with the capability of cleaning up to four rooms, spray nozzles that use air pressure to spray cleaning solution and therefore minimize trigger-pulls, aluminum pole extensions that can extend up to 42 inches and interchangeable rubber heads for dusters. The number of chemicals used for cleaning rooms was also decreased. Previously, housekeepers used between 13 and 15 different chemicals over the course of their shifts, many of which could be harmful if frequently ingested. Now, housekeepers use only four chemicals—a hand sanitizer, an all-purpose cleaner for the bathrooms and furniture, an air freshener, and a weekly odor-eliminator.

After Barrett developed the new housekeeping process, he initiated a comprehensive training program that now applies to all New Castle cleaning staff across the globe. The program’s successes are many. It reduces the strain on housekeepers’ bodies by 95 percent and diminishes the time spent on rooms by about two minutes on average in some locations, and as many as four to five minutes in others. “The goal was to make the job easier for the housekeepers and give them the tools necessary to perform their tasks more efficiently. We were hoping it would reduce the time as well, and we have benefited from that,” Barrett says.

Efficiency has markedly improved since the initiative began and overall morale is up as well. Wefers reports that a dramatic cultural change has taken place since the program began. This was apparent at the property’s monthly employee celebration for staff, where workers mingle in a stress-free, comfortable environment. In the past, the housekeepers would mainly keep to themselves, but since implementing the initiative, this has changed. “The housekeepers are sitting with front desk associates, food and beverage associates, and even managers. They no longer feel that there is a line between the front and back of the house,” Wefers says. Instead, housekeepers feel like they have a voice in hotel development and productivity, which promotes change in the establishment’s employee culture.

Reward systems have also been implemented so that employees feel valued and appreciated at work. “We put everyone’s name up on a board, and when guests fill out a hotel survey, we find out who was assigned to their room and give them a star,” Wefers explains. “When guests go onto Tripadvisor and mention how clean their room was, that housekeeper gets a star.” The employee who accumulates the most stars at the end of each month is rewarded with a gift card to a local supermarket or shopping mall. “The best part is, now we have housekeepers invested in hotel performance. They’re asking, ‘How’s Tripadvisor?’ and ‘How’s GSS?’ We’ve never had that personal investment before.” Rewards are also distributed for employee referrals, which account for a third of the housekeeping staff at New Castle’s Syracuse location. If a referred employee completes the first 90 days on the job, the person that referred them gets an extra $100 toward their paycheck that week.

By catering directly to housekeepers’ needs, New Castle Hotels & Resorts has profited in more ways than one. Turnover rates have stabilized significantly, and the hotels are saving money due to their staff retention rate. Housekeepers feel more involved in the hotel’s success, and are more comfortable communicating with their employers. Many offer suggestions or adoptive methods that are persistently beneficial, and they now have more time to engage with guests, maintaining a friendly environment. Guests also benefit from this initiative by enjoying an efficiently cleaned room and interactions with less-stressed housekeepers.

When asked what advice he would give to other hoteliers on how to implement a more efficient housekeeping procedure, Wefers doesn’t hesitate. “The most efficient route to a clean room is a happy housekeeper,” he says. “Don’t look at housekeepers as cost-containment measurements. You have to reverse-engineer if you want to save money—take care of your housekeepers and the benefits will extend to the bottom line. Hoteliers like to say ‘Our staff takes care of each other. We’re like a family.’ Now, we really are.”