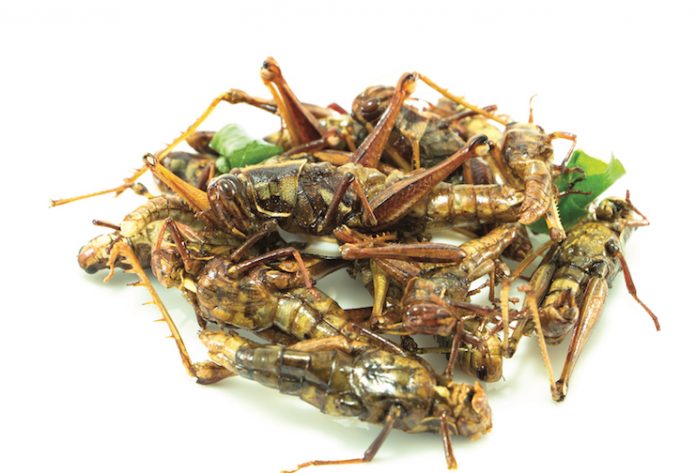 Adventurous eaters are embracing something called entomophagy, or, in layman’s terms, eating bugs. While this practice is unusual for most Americans, consuming insects is very common in other parts of the world, especially in areas with large populations says Patrick Berwald, vice president of food and beverage for Benchmark, an international hospitality management company.

Insects can be incorporated easily into many everyday menu items— ground up and used in baked goods, or combined with oats, sugars, and other ingredients to create granola or energy bars.

“More and more people are consuming bugs such as crickets, spiders, and ants as part of their regular diet,” Berwald notes. “They’re actually very healthy for you, and they’re a fantastic source or protein. In fact, insects have four times more protein than beef.”

Nutrition facts aside, Berwald says that bug eating will become more popular worldwide because of how sustainable an ingredient insects are. Populations are growing around the world, yet food resources are running out, as oceans are overfished and farming land is depleted. Insects, however, from locusts to caterpillars to ants, exist in an abundance and don’t require nearly as many resources to farm. According to National Geographic, one hundred pounds of feed only produces ten pounds of beef, yet the same amount of food can sustain 45 pounds of cricket. Farming bugs simply uses less water, land, and feed than farming cattle.

“I think that the bigger picture here is that in the future, we’re going to have a real issue with food availability,” says Berwald. “We need to find new ways of finding sustenance. So I think people are going to start to become more and more comfortable with insects and consuming them.”

Hotel owners and chefs are now beginning to incorporate bugs into meals as a way to bring unique, noteworthy dishes to their restaurants, in addition to being an ecologically viable ingredient. Different bugs have different textures, flavor profiles, and purposes in the kitchen, says Berwald, allowing chefs to integrate them into many aspects of cooking.

As bug-eating becomes more commonplace at boutique and destination hotels, Berwald suspects that the practice will gradually grow in popularity among the general public as well.

“People are really going to start to use bugs more and more,” he says. “And I think that this is the next evolution of adventurous eating, where people are savvier about where their food is coming from, what’s in their food, and just being generally accepting of trying new things.”

Brands LODGING Staff - January 19, 2021
PARIS – Accor announced that the group is kicking off the year with a full schedule of new hotel openings around the world. Despite...