Home Industry News Conferences and Events AAHOA Celebrates the Past and Looks To the Future at 2019 Convention... 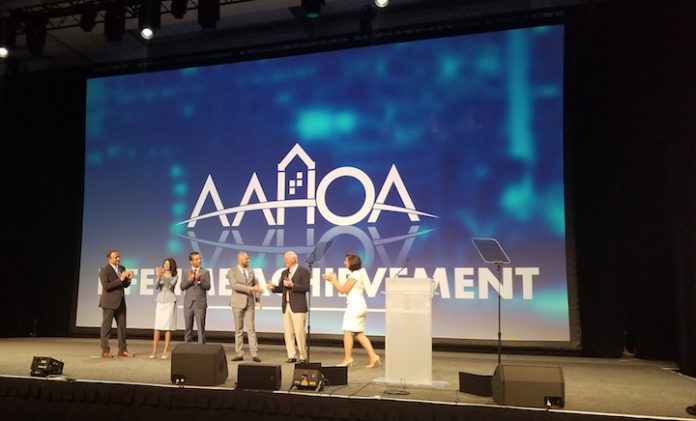 Last Thursday, the Convention kicked off with industry legend Mike Leven, who, in 1989, was one of the co-founders of AAHOA. He talked about the discrimination facing Asian American hoteliers 30 years ago, and how AAHOA was formed to combat challenges that stemmed from this oftentimes-hostile environment.

Leven also mentioned that the first AAHOA Convention had only 150 attendees and a year’s membership to the organization cost just $25. Today, AAHOA has 18,500 members, making it the largest hotel association in the world. “How proud I am of what you have done,” he said. “And the young people here should know how much work went into it, how many of the original founders left their businesses behind and worked so hard to get the membership that [AAHOA] has today.”

Leven added that he’s extremely proud of the organization’s evolution over the last three decades, and especially the fact that the 2019 Chair of the organization is Jagruti Panwala, the first woman to hold such a position. When he mentioned her name, the crowd at the Convention Center burst into cheers and applause, with cries of “Yes!” punctuating the celebration.

The AAHOA board joined Leven after his speech and presented him with a Lifetime Achievement Award for his 30 years of support and contributions. The board also recognized the late Lee Dushoff, who helped launch AAHOA and fight discrimination against Asian American hoteliers. His widow, Elaine, accepted the Lifetime Achievement Award on his behalf.

A Force in the Industry

There was a strong focus at the Convention on AAHOA’s recent growth, which as been exponential over the last several years. “AAHOA is an association people want to join. Lawmakers now look to our members for their opinions. Our industry partners value our leadership. And I am proud to say that the voice of America’s hotel owners is stronger than ever,” described 2018 AAHOA Chairman Hitesh (HP) Patel. “It’s no secret that AAHOA continues to grow. Our voice is louder, and more people are listening to what we have to say.” He added that the membership is more engaged than ever, and that 45 percent of AAHOA’s 18,500 members are lifetime members.

HP Patel touched on many of the issues facing hoteliers in 2019, from frivolous lawsuits to the impact of the new tax laws. He stressed that AAHOA is working to help its make money, save money, and protect their investments. He also encouraged members to get more involved with the association’s legislative initiatives and contribute to the PAC, which raised a record $1.25 million last year.

Education was also a major initiative for AAHOA over the past few years, and HP Patel said that more than 14,600 members engaged in AAHOA education in 2018. “That’s a 100 percent increase in just two years!” he noted.

Rachel Humphrey, interim president and CEO of AAHOA, also addressed attendees. She spoke about the strength that comes from how well AAHOA members work together and welcome new people into the fold.  “The welcoming atmosphere and camaraderie of our members is found at every AAHOA event. AAHOA remains an association that brings people together and lifts people up. This spirit, embodied by you, our members, shines through in all that AAHOA does.”

Changing of the Guard

Another big announcement coming out of the Convention was the partnership of AAHOA and Emerald Expositions for the relaunch of HX: The Hotel Experience Powered by AAHOA. The first outing for this new iteration of the HX trade show will be this November in New York City. “Three of the greatest values AAHOA brings to our members are the partnerships we forge, the trade shows, and the educational offerings we provide, such as those at this convention. We are excited to join with Emerald Expositions to bring you HX powered by AAHOA,” said HP Patel.

Above all else, this year’s AAHOA Convention was a celebration of all that the organization has accomplished and what it plans to accomplish in the future. “This organization is the result of what can be done when things are difficult,” Leven said. “What can be done to rise above the difficulties when people discriminate, dislike, and make stereotypical statements. And for this country, the United States of America, we still remain the only country where what you have done can be done.”