Home People Careers A Career Calling: Scott Berman on Planning His Next Chapter and Returning... 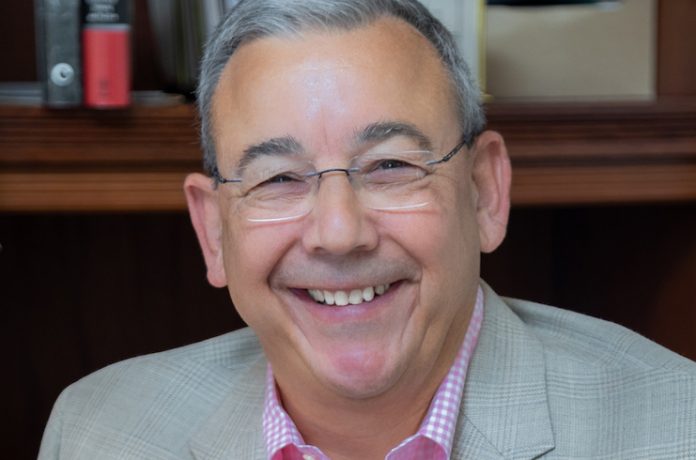 After three decades with PwC, where he currently serves as U.S. hospitality and leisure practice leader, Scott Berman will be retiring at the end of June. This longtime friend of the industry says what initially sparked his interest in hospitality back when he was a teenager still captivates him today. Reflecting on his nearly 40-year career, lessons learned from the various crises the industry has navigated during that time, and considering what’s next for himself and hospitality, Berman shares with LODGING his intentions to continue serving this sector that has welcomed him for decades. Berman recalls what first drew him to the lodging business. “I was an overachieving kid from Baltimore who became a competitive junior tennis player. Back in the 70s, we didn’t have 5.4 million hotel rooms in the United States; we had less than a million. So, when I traveled, I basically moved from Holiday Inn to Holiday Inn.” That experience left an impression on Berman, and at 14, he told his parents, “I’d like to buy 10 shares of Holiday Inn stock.” From there, Berman says, he “got the bug.”

After graduating from the Cornell School of Hotel Administration, Berman interned with major brands and landed a position at Laventhol & Horwath in Miami. While working in a firm that was synonymous with hospitality, Berman immersed himself in “really cool projects in some of the sun-and-sand destinations of the great capitals of Latin America and brought many brands to markets like Costa Rica and Mexico.” The Sunshine State has been Berman’s home ever since—he quips that he has “essentially been on a 40-year spring break in South Florida.” While at Hilton International, Berman focused on the Caribbean and Latin American markets and opened an office in Coral Gables in 1989. Then in 1992, Berman began a position with Coopers & Lybrand. Six years later, the firm merged with Price Waterhouse to form PwC, where he has spent the last 23 years as partner and the last 15 years as the industry leader for hospitality and leisure.

“In 1992, the world was upside down—there was the first Gulf War and all sorts of economic uncertainty. It was time to go back to my roots.” The industry has faced its share of crises since that time, but none of those compare to the global scale of the COVID-19 pandemic, Berman says, noting a fraction of the devastation by the numbers: U.S. employment was down 8.5 million in February 2021 compared to February 2020, according to the Bureau of Labor Statistics. In early 2020, CEOs were quoted as saying that the industry was losing $500 million a day. Eight in 10 hotel rooms were sitting empty and 70 percent of the hospitality workforce had been laid off or furloughed, per AHLA data from April 2020. “The question I was getting in 2020 was, ‘When is this going to turn? When’s the restart, Scott?” Clients repeated those queries for months. “I look at that time in three-month increments and equate it to different stages of grief: We were in denial, thinking things would turn right by Memorial Day, July 4th, certainly by Labor Day.” In reality, industry recovery didn’t start in earnest until 2021 once effective vaccines became available. When considering the lessons learned over the past two-plus years, Berman identifies three categories: first, he points to the unprecedented leadership shown during the crisis by those who “recognized the need to come together.” Second, he applauds the work led by industry associations like AHLA and the U.S. Travel Association. “That collaboration within the industry led to a shared sense of responsibility that we need to protect not only our guests, but our employees.” Berman also highlights the convergence of science, hospitality, and consumer brands, which together built partnerships and developed pandemic-era solutions.

Thanks to these efforts and other positive developments, recovery is now well underway. “PwC believes that by the end of this year, RevPAR in the United States will essentially be 90 percent of what it was in 2019,” Berman notes, although he is quick to point out that the data doesn’t tell the whole story. “In the south, in states that were far more liberal in their masking policies and open for business, like Florida, Texas, and Arizona, and in markets like Miami, Tampa, Nashville, Raleigh, Austin, Salt Lake City, and Phoenix, they’re ahead of 2019 for the most part. New York, Boston, Washington, D.C., Chicago, Minneapolis, San Francisco—these very important top 25 markets are still lagging.” A complete comeback for those latter markets will take some time, Berman adds. “Forecasting is an imperfect science, even in the best of times, let alone during a pandemic. It’s really gambling,” Berman maintains. “What the Great Recession taught our industry—and what I held onto through my days of uncertainty—is that after the world fell apart in the third quarter of 2008, it took us four to five years to see the industry accelerate.”

For those like himself who study the industry, Berman says the ability to maintain rate has been significant, and that relates to the innovation and technology the industry was spurred to adopt during the pandemic. “Our models need to change. We need to do more with less. Technology, digitization, depending less on human talent, where we can afford it, is critical.” With demand returning, albeit inconsistently across markets, hospitality businesses are now facing a familiar crisis—the industry’s ongoing “labor shortage,” which Berman describes as “a long-term systemic challenge that is not going to be resolved overnight.” Diversity and inclusion must remain top-of-mind when considering solutions, he adds. “I think it comes back to the basics and selling the great elements and aspects of this sector, and it starts in our schools, even at very young ages.” He points to the significance of initiatives like Howard University’s establishment of the Marriott-Sorenson Center for Hospitality Leadership, made possible by a $20 million endowment from the J. Willard and Alice S. Marriott Foundation in honor of the late Marriott International President and CEO Arne Sorenson. “I’ve had the privilege to work with Howard to create the blueprint for that Center for Hospitality Leadership. We’ve never had trusting conversations like those we’re having with students, professors, administration, and our industry,” Berman says. “It’s one of many initiatives, but one I’ve personally embraced and will continue to be a part of after my retirement from PwC. We need to reinforce the opportunities that hospitality presents to a labor force.”

While there is much work to be done, Berman says the fundamentals of lodging are healthy and in place, and the future of this business will rely on product innovation converging with new technology. He looks to the evolution of resorts as an example. “My first consulting gig ever in 1984 was for an all-inclusive resort in Jamaica. In October 2021, there was a headline in the Wall Street Journal that read, ‘Big Hotel Brands Bet on All-Inclusive Resorts to Counter COVID-19 Slump.’ I had a nice chuckle, because I’ve been studying all-inclusive resorts for 40 years and I helped architect what today’s all-inclusive is.” Berman recalls a point in his career when those assets were devalued, but today, resorts are leading the recovery. “Nobody would touch resorts. All of a sudden, they’re the darling.” Today’s successful models—whether all-inclusive resorts, extended-stay brands, or even short-term rentals—are able to leverage technologies, innovations, and platforms to create better products and more profitable margins. Berman says banks, investors, and REITs believe in the future of this sector and will continue to choose brands that build on the fundamentals and improve the product with new innovations and technologies.

As for his own future, Berman plans to return to the hospitality industry one way, shape, or form. “A firm like PwC is a remarkable place to spend the bulk of your career. It has provided me the rigor, discipline, and platform to get up in the morning to serve clients and solve for the next issue, problem, or concern. It’s kept me sharp and relevant in my thinking.” Berman, who is associated with several schools and universities focused on hotel and restaurant management, will continue to be involved in shaping hospitality education, and while his next career move is “to be determined,” he guarantees, “There will be a chapter two.” From an enthusiastic teenage investor in hospitality company stocks to a seasoned industry expert, what keeps Berman coming back to this sector is, in a word, the relationships. Between colleagues (including his team at PwC, which Berman proudly notes includes seven direct reports with a combined 125 years of experience in the firm), clients, mentors, mentees, coaches, professors, and deans—“that relationship map is extraordinary,” he marvels. “I am so blessed to be able to toast and share with these folks.” Like many, Berman says the past two years have been a humbling experience. “To lose Arne Sorenson, Mark Elliott, Kevin Mahoney, and many others in our industry, it does make you reflect about what’s important in life, and your health and your family come first. The hospitality industry has been really remarkable to me and my family, and I am so excited to continue to have a voice that can make a difference and give back.”

In what he calls a rare occurrence, Scott Berman, U.S. hospitality and leisure practice leader, PwC, says he is a contrarian when it comes to the industry’s outlook. For one, Berman does not believe that business travel is on its deathbed. “It will return quite aggressively—with the caveat that there are still a lot of curves ahead of us.” The twists and turns Berman is referring to include slow-to-reopen borders, cautious return-to-work policies, and inconsistent mask regulations, which will take time to resolve. However, he maintains the need to travel for business will remain as strong as ever. “I can tell you that while corporate America saved a lot of money not traveling and balance sheets are even stronger, the competition to grow businesses, excel, and be number one requires human contact,” he explains. “By 2023 and certainly in 2024, I think we’re going to look back on this similarly to how we looked at group business during the Great Recession, when many pundits said, ‘group will never come back and conventions are dead.’ Well, I’m here to tell you they came back better than ever.”

As for leisure, Berman sees this segment as still relatively untapped, although he expects that some of the “revenge travel” that the industry has seen will eventually abate. “It’s been critical that [leisure properties have] led the way, but they are facing labor shortages and service issues.” He describes a client with a resort that closed down 25 percent of its inventory while still posting 2021 margins greater than those of 2019 when the property was operating at full capacity—a testament to the power of maintaining rate and travelers’ appetite for getaways. “We have $2-3 trillion of consumer savings in the United States… inflation is certainly going to eat into that, but there’s still this roar back to resorts and leisure—those pent-up emotions to get out of the house to beach, mountains, lakes, and ski slopes.”

In summary, Berman says, “Leisure will continue to be strong, but will revert back to the norm. Eventually, business travel will be led by group first and business transient second.”