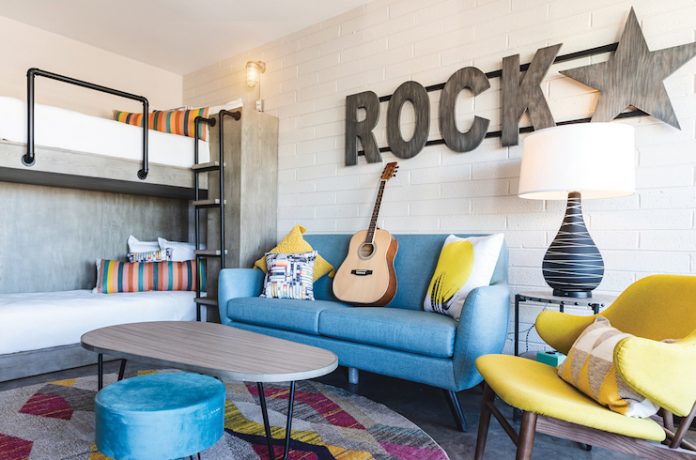 Since its opening 70 years ago, the Egyptian Motor Hotel has become a retro landmark in Phoenix’s Grand Avenue Arts District. To reimagine the motel concept for modern travelers, the property’s owners teamed up with Chicago-based Rebel Hospitality, a guest-centric, lifestyle-driven ownership and management company. Rebel Hospitality President Gene Kornota tells LODGING that this project taps into the nostalgia-fueled trend of repurposing roadside accommodations. “Mid-century hotels littered U.S. 60—a highway leading out of Phoenix towards Los Angeles—and many of those properties are in decay or have been razed. We wanted to save and preserve this one,” Kornota explains. Once a stopover for travelers, the resurrected motel will become a destination in its own right; soon to open on the site of the property’s former parking lot is Egyptian Live, a 250-seat outdoor entertainment venue and nightly cocktail bar that will host a line-up of local musicians, live art, magicians, comedians, and more. The reborn Egyptian Motor Hotel will also house the first brick-and-mortar location of local favorite Chilte, a pop-up and food truck serving new-school Mexican street food. The motel’s V-shaped building—a popular design for drive-up, exterior-corridor accommodations in the 1950s—has 48 rooms that allow guests to enjoy live performances from private balconies. Kornota notes that by repurposing the parking lot as a venue and the exterior corridor as guestroom balconies, the motel is able to build additional revenue streams into its operating model, secure outdoor entrances so guests feel safe, and create a vibrant social scene to attract travelers who want to be at the center of the action.

The Egyptian Motor Hotel will offer a variety of room types—from king beds to single-stacked bunks. The latter allows for a more spacious lounge area with a sofa, coffee table, and chairs, ideal for groups of friends traveling together, Kornota says. Concert-goers may even book a room simply to hang out and enjoy a show, he adds.

Guestroom furniture, fixtures, and equipment harken back to the motel’s mid-century origins, but with modern touches; for instance, guests can stock up on 1960s-inspired refrigerators by ordering from an app on their phone. “This is the first hotel we’ve done where there are no phones in the room,” Kornota says. “We’ll engage with customers through the app and SMS messaging.”

In a nod to the stage that sits just below each guestroom and the artists who will perform on it, music-inspired touches are woven throughout the space, like acoustic guitars in some guestrooms, a Bluetooth retro-style Marshall audio system, a carved wooden emblem that celebrates “Rock,” and depictions of icons like Jim Morrison.

Referencing the bright colors and various patterns that appear throughout the guestroom design, Kornota says that “almost anything goes—the carpet pattern clashes with the fabric in the big moon chair, and it works, but it wouldn’t work anywhere else,” he explains. “When you stay here, it’s like you’re completely immersed in sunshine.”