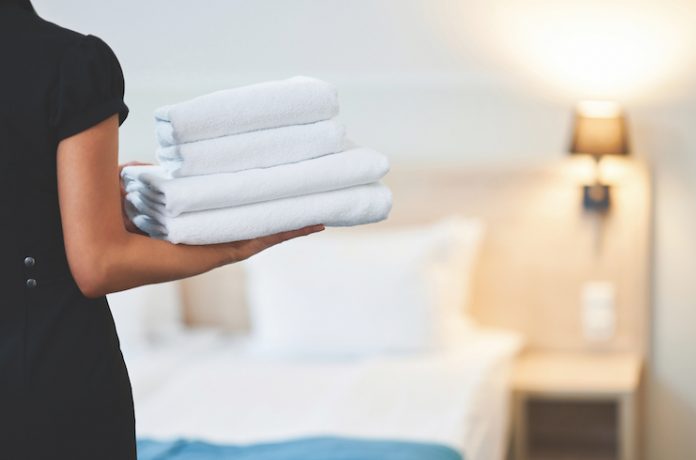 During 2020, most U.S. hotel operators limited or eliminated cleaning stayover rooms and serving complimentary breakfast and/or evening cocktail receptions to reduce contact between guests and staff. The major lodging brands accepted these changes to meet local health regulations and provide some expense relief to cash-strapped owners.

Coming out of the 2020 lodging industry recession, hotel owners and operators question the fate of daily housekeeping service and the return of extensive offerings of complimentary food and beverage service. Assuming health conditions improve and regulations are relaxed, will the brands reinstate these amenities and services?

Per the Uniform System of Accounts for the Lodging Industry, the costs to provide housekeeping and complimentary food and beverage service are recorded in the rooms department, which is the greatest generator of revenue and contributor to profits. According to CBRE’s annual Trends in the Hotel Industry survey of operating statements, rooms revenue represented 69.9 percent of total revenue in 2019, while the rooms department profits comprised 81.9 percent of total departmental profits. These ratios increased in 2020 as hotel restaurants, lounges, meeting rooms, and spas were shut down.

Because of the dramatic declines in performance during 2020, rooms revenue and rooms department profits declined from 2015 to 2020. Measured on a compound annual change rate (CAGR) basis, rooms revenue has fallen 16.8 percent from 2015 through 2020 using dollars per-available-room (PAR) and 4.7 percent using dollars per-occupied-room (POR). This resulted in an 18.4 percent CAGR decline in profits PAR, or 6.6 percent on a POR basis.

Because most of the expenses in the rooms department are variable in nature and therefore declined because of the reduced number of occupied rooms, total department expenses decreased by a PAR CAGR of 12.5 percent from 2015 through 2020. However, indicative of the influence of the fixed expenses within the department, total expenses measured on a POR basis actually increased by a 0.2 percent CAGR during the same period.

CBRE tracks 11 specific expenses within the rooms department. In 2020, the combined cost of management and non-management salaries and wages, bonus payments, service charge distributions, contract/leased labor, and payroll-related expenses (employee benefits) made up 69 percent of total department expenses. Of the remaining 31 percent, laundry, linen, and guest supplies (10.1 percent) and agency commissions (7.5 percent) were the greatest costs.

To account for the decline in business volume, we analyzed the change in rooms department expenses from 2015 through 2020 on a POR basis. Given the declines in rooms revenue, it makes sense that the payout of mandatory service charges experienced the greatest CAGR decline (-16.4 percent), along with the reservation assessments (-10.7 percent) charged by the franchisors. Bonus payments also declined commensurate with the fall-off in hotel profits (-7.4 percent).

Despite the reduction in the number of rooms occupied, salaries and wages, along with payroll-related expenses, increased on a POR basis. Management salaries, which are exclusively fixed in nature, increased by a CAGR of 5.6 percent from 2015 through 2020. The rise in mandated employee benefits resulted in an 8.3 percent CAGR over the past six years.

Among the other property types, relatively strong performance in 2020 muted the revenue and profit declines that limited-service and extended-stay hotels suffered from 2015 through 2020. Conversely, convention hotels endured the greatest declines in rooms revenue and profit because of the extreme fall-off in group demand during 2020.

The experience of rooms department expenses over the past six years typifies the ability of management to control variable expenses while struggling with those that are more fixed in nature. Owners and operators await the decisions of the brands regarding the reinstatement of daily housekeeping and full complimentary food and beverage service. The restoration of these services and amenities will have an impact on both the fixed and variable expenses within the rooms department, thus having a significant effect on profitability.