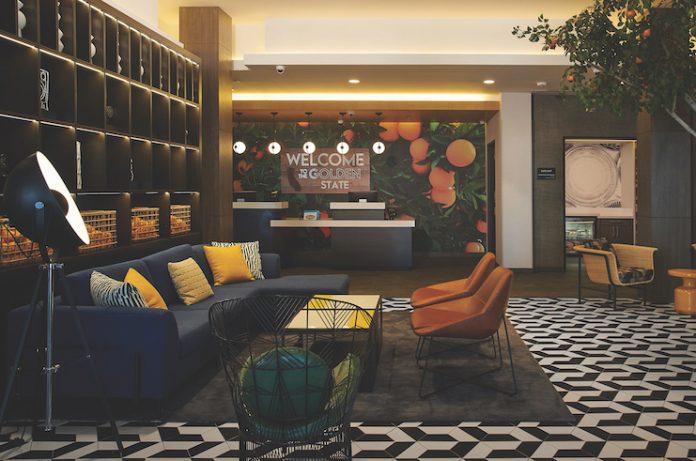 In the San Fernando Valley, groves of citrus trees once stretched across the land. That bygone era, along with the area’s cinematic roots, is celebrated in the redesign of the 96-room Hampton Inn & Suites by Hilton Los Angeles/Sherman Oaks. “We have a real fondness for this project; it’s a little gem,” says Alisa Chodos, principal of Studio HBA, a division of Hirsch Bedner Associates that led the redesign. The team’s inspiration for the project stemmed, in part, from Chodos’ own experience visiting her grandmother in the Valley and seeing “miles and miles of citrus groves all around.” Today, that same part of the Valley is now an urban hub. Just nine miles from major movie studios, the Hampton Inn & Suites caters to the creative class and entertainment business travelers with a boutique feel, although the property hosts a diverse intersection of guests, including first responders when the renovation debuted during the pandemic. To recall the area’s fertile history, the lobby design incorporates citrus-inspired elements—both literally, as in the 12-foot preserved orange tree that serves as the lobby’s centerpiece, and more subtly in the patchwork ceiling with wide planks of wood in various finishes are reminiscent of citrus crates. This playful style with its historical references is carried throughout the rest of the hotel. For instance, Chodos describes artwork leading to the property’s meeting room—antique farm tools framed in shadow boxes—and in guestrooms, which feature a collage of vintage postcards showcasing travelers’ mid-century adventures in the Valley. “Everywhere you go—in the public space and in the guestroom—there’s a tie-in to our theme.”

The lobby is brightened with a combination of lighting levels throughout the space. “We even have some modern Klieg light-like floor lamps that are a nod to the movie industry,” Chodos points out. To the right upon entry into the lobby is a lounge with lower lighting and a more residential feel, she adds, “So you feel less like you’re on stage.”

Pops of yellow bring sunshine into the lobby space. As Chodos explains, “In Southern California, there’s so much saturated color and an indoor-outdoor connection because of the sunny environment. We wanted to pull that into the lobby.” This, contrasted with concrete-color floors and neutral walls, creates “a lovely distribution of color and accents.”

Citrus is central to the hotel’s design narrative. For a dramatic focal point in the lobby behind the front desk, “We took a photo of orange tree branches and exploded the image, which gives it a more contemporary, modern feeling instead of looking just like a representational piece,” Chodos explains. The lobby also has a preserved orange tree and a shelf display with the fruit.

Chodos says the team chose the modern black and white tile to cater to a younger demographic. “It accents the seating areas and creates a more intimate space,” she explains, which aligns with the goal of creating a multi-use public space that offers both communal areas for gathering and quieter spaces for more privacy.