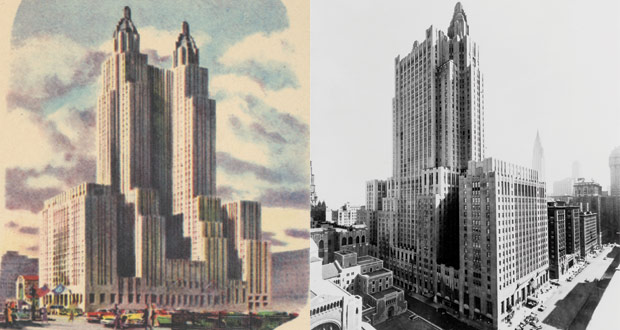 Born in Poughkeepsie, N.Y., in 1878, the young Lucius Boomer’s goal in life was to become a professional violinist. By all accounts, the would-be virtuoso was good with his instrument, but as he got older, the money for music lessons dried up. Intent on achieving his goal, he went to work, first in the railroads as a stenographer, and later at hotels. This was Boomer’s first step toward becoming president of the Waldorf-Astoria.

In 1897, at the age of 19, Boomer moved to Florida and began working at Flagler Hotels in St. Augustine. Once he started in lodging, his desire to be a concert violinist was overwhelmed by his fascination with hotel operations. Eight years later, he held his first manager position, and two years after that, he moved to New York City to work at the Plaza Hotel as an assistant to Fred Sterry, the property’s first general manager.

Boomer eventually moved on and joined two other hotel investor-operators to create the hotel holding company Ainslie, Merry & Boomer, where he served as treasurer. While studying what good and great hotels needed, he always kept an eye on the finances. His method of managing the high cost of running great hotels to meet the expectations of their clientele—which required paying salaries to a large staff—by finding ways to make up the money elsewhere became known as the loss leader system of hotel management. Soon he was manager of the McAlpin Hotel, which, with 1,500 rooms, was then the world’s largest hotel. Boomer was described as a “master of detail, a businessman to the core, and the head of the most completely organized and scientifically operated hotel in the world.”

His quick rise up the hotel ladder caught the eye of T. Coleman Du Pont, and together, they established Boomer Du-Pont Properties. Boomer would manage the hotels and institute management procedures and systems controls, and Du Pont would handle the financial backing. Soon they were operating several high-end hotels—the Bellevue-Stratford, the New Willard, the McAlpin, and the original Waldorf-Astoria. 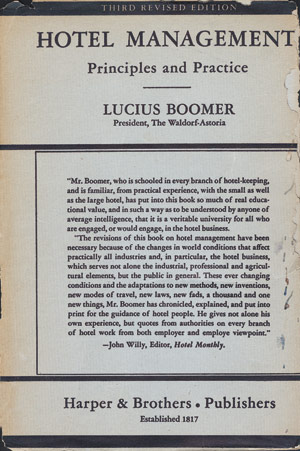 Boomer was a visionary. He was among the first hoteliers to embrace modern business practices stemming from the American Industrial Age, in effect, aligning hotel operation with then-modern corporate operations. Along these lines, he advocated for hotel education, including the Cornell School of Hotel Management and other university programs, as well as vocational programs and hotel short courses.

In 1925, Boomer published “Hotel Management,” an all-encompassing study on the operation of a hotel. One issue he raised was the need for hotels to handle public relations. While few hotels then understood the value of press coverage, Boomer viewed public relations as an important component of a hotel’s operation, one that offered the prospect of free advertising and the chance to promote a positive image of a property.

Boomer was able to test his ideas on hotel management when, in 1929, he broke ground on the new Waldorf-Astoria Hotel. He opened the hotel in 1931, when the nation was in the depths of the Great Depression, and continued to operate it until his death in 1947. Boomer has been largely forgotten, except perhaps for his management of the Waldorf-Astoria. The innovations he introduced to hotel management, whose principals that have been long accepted in hotel operations, have been greatly overlooked.

About the Author
Mark Young, Ph.D., is director of the Hospitality Industry Archives at the Conrad N. Hilton College of Hotel & Restaurant Management, University of Houston.

Survey: 74 Percent of Hotels Will Lay Off More Employees Without Further Aid

Conference Updates Christine Killion - September 21, 2020
Amid the rise of OTAs and an increasingly competitive hospitality space, independent hotels have had to find ways to differentiate their marketing and distribution...

Coronavirus Robert Mandelbaum and Bram Gallagher - September 21, 2020
Since the start of the COVID-19 pandemic, CBRE has analyzed the operating performance of U.S. hotels during historical economic recessions to estimate the level...