Home People Checking In R-E-S-P-E-C-T: Veronica Garcia of Gold Coast Premier Properties Group on What It... 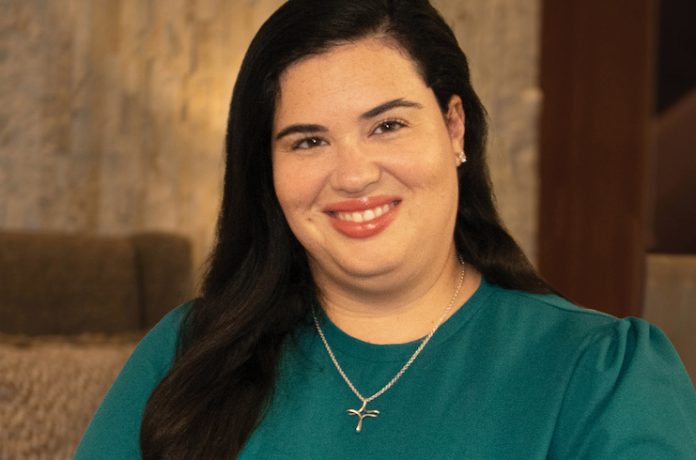 Veronica M. Garcia, president and chief operating officer of the Miami-based extended-stay hotel development company Gold Coast Premier Properties Group, is among the women who, according to the 2022 Castell Project Women in Hospitality Industry Leadership Report, represent only 10 percent of leaders in the hotel investment and development realm. As she told LODGING, she believes several habits account for her success in the “rough and tumble world” of hotel development, including asking questions, being prepared and persistent, and projecting the kind of self-confidence and knowledge that command respect and cooperation.

Disenchanted with the communications career she had studied for and begun after graduating from college in 2012, the Miami native says, “I took a chance and became an administrative officer at Gold Coast in 2015, and completely fell in love with the hospitality sector.”

Garcia considers herself lucky in that she received much support during her earliest days at Gold Coast, while making her own luck through a concerted effort to learn the business and earn the respect of colleagues and associates. “When I first started with Gold Coast Premier, it was a challenge to learn the business—I had to look up what RevPAR meant on my phone. But, because I always wanted to learn, I didn’t hesitate to speak up and ask questions.” Still, she adds, “I also knew when to keep quiet, to listen to the conversations around me.” Garcia says that everything is a learning experience. “In my first job, I learned to be creative and organized and how to deal with different people in another male-dominated industry. I was able to bring that skillset over to Gold Coast.”

While she started out “at the ground level” answering phones, Garcia says she was soon running to job sites and attending city and county meetings. She describes how she quickly felt at home with WoodSpring Suites brand developers: “We work together like a family. If I have an issue or question, I can call them, just as they can call me; this has always been the way I’ve learned best throughout my career.”

Garcia, who says, “I absolutely love my job,” finds something in this niche of hospitality that attracts and hooks colleagues throughout the industry: its variety. “Every day is something different. You’re dealing with different people, different sites, and different construction companies, and there are always opportunities to bring new ideas to the table. Right from the start, every day has been a learning experience,” she concludes.

Staying Above the Fray

Garcia encourages everyone seeking to rise through the ranks in hospitality—regardless of gender or ethnicity—to do their job while holding their head high. “To me, it is paramount to establish your credibility as a professional. I think that is truly one of the most powerful things that you can do,” she states, adding, “If you can do the job, it shouldn’t matter whether you’re a man or a woman.”

Still, Garcia admits, there are times this can be challenging, especially on construction sites. “Some people will try to push and pull if they think they can get away with it, but it doesn’t really faze me,” she claims. “I don’t take it personally. I just do my job, handle it with respect, and move on.” Related to these tenets, Garcia recalls being on a panel where a student asked about how to make a good first impression in a job interview. She replied: “What I think opens doors is to convey confidence, knowledge, sincerity, and self-respect from the moment you enter the room.”

Gold Coast Premier Properties Group President and Chief Operating Officer Veronica Garcia relates that, in rising up the ranks to her current position, she benefitted from plenty of unofficial mentoring from leaders around her. “There were many senior people that have been extremely supportive, and in countless ways, were very generous with the time that they’ve taken to share their knowledge and experience,” she says. Garcia also took advantage of Choice Hotels’ employee training program, as well as Cornell University’s certificate program.

Her more formal training predates HERtels by Choice Hotels, an enhancement of the emerging markets development program the hotel company launched nearly 20 years ago to extend the opportunity of hotel ownership to underrepresented populations. The HERtels initiative, which was announced by the company in May, aims to actively address the most common barriers women entrepreneurs face when owning and operating a hotel, such as obtaining financing.

It also provides dedicated training and education, and personalized mentoring and networking opportunities.