Staying up to date on the latest technological advances is one of the greatest challenges facing hoteliers in 2019. Innovations are constant, forcing those in the industry to move at a brisk pace—and take on often-growing expenses—if they want to remain technologically relevant. That said, most hoteliers do aim to stay at the forefront of technology, both for the benefit of their guests and their businesses. This desire, though, is a far cry from an earlier time when the industry was slow to move toward the acceptance of one particular technology that almost every guest expects today—air conditioning. 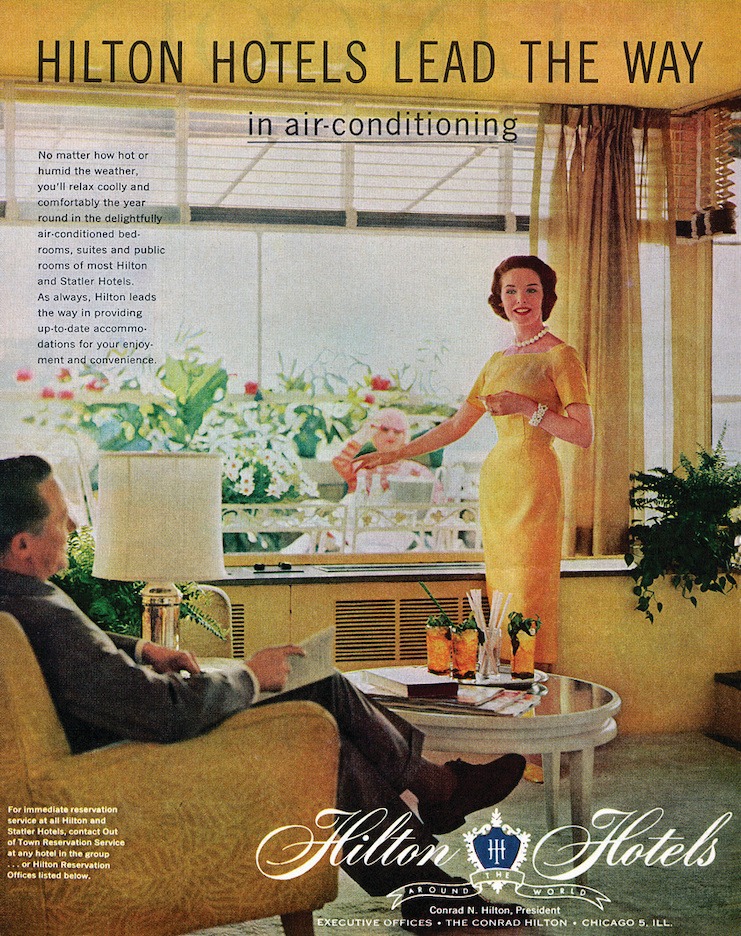 Air conditioning (AC) was first introduced in the early twentieth century. Some industries were quick to hop on the bandwagon—movie theaters and some restaurants installed air conditioning systems as soon as the expense was manageable. However, the hotel industry was much more hesitant about the technology. The cost to install AC systems would have been very expensive, especially for something that many hoteliers felt was a gimmick.

A large part of the problem was that air conditioning was not seen as a serious issue. A look at the historic news accounts reveals that the concept was treated almost like science fiction. In 1929, one newspaper description noted that some skyscrapers in Detroit were getting “piped ozone.” The New York Times headlined one account from 1931 as “Man Manufactures Weather for His Health and Comfort.” Hotel Monthly in 1937 highlighted how one hotelier in Missouri made the case for “air-cooled,” not air-conditioned, hotels. The argument was that circulating air with the aid of large ventilation fans would cool down the rooms for guests, especially at night.

Despite some folks’ skepticism of air conditioning, its integration became inevitable as the cost to install the large mechanical systems came down in price and the technology’s popularity increased. By 1936, the Hotel La Salle in Chicago, which had just over 1,000 rooms, was ready to experiment with air-conditioned rooms. The hotel announced that it would install air conditioning in the guestrooms of one floor and they would expand the program if these rooms proved popular with guests. Not to be outdone, the Stevens Hotel, which was then the world’s largest hotel, announced that they would install Carrier units next to the windows. These units would be on the “new deluxe floor” and guests who wanted an air-cooled room would have a $1 fee added to their bill.

While the popularity of air conditioning grew, the cost complicated hotels’ migration to the technology. The Great Depression of the 1930s meant that most hotels could not afford the outlay of large amounts of money to install AC systems. The start of World War II further delayed AC system installation across the country.

After World War II, most hotels had been operating for 15 years without a serious renovation. As hotels planned for the long-defrayed updates, air conditioning finally received serious consideration. In their 1953 annual report, Sheraton Hotels noted that the renovation of the Park Sheraton in New York would include “Rooms of Tomorrow,” which included air conditioning and RCA television sets. Hilton Hotels spent over 10 million dollars in the 1950s to convert the majority of their hotel rooms in Chicago, New York, Detroit, and Cleveland. In 1957, Sheraton noted that “complete air conditioning has become a virtual necessity in leading hotels, as well as being a good investment.” Following this lead, the industry as a whole began to change. More important, new lodging establishments sprouting up along the highways were all built with air conditioning. To compete, older properties had to upgrade their own systems, bringing air conditioning completely into the hotel mainstream.

Focusing on “The Stay”: Updates on Hilton’s Brand Platform and Advertising Campaign