Later this month, NYC Pride will welcome WorldPride for the first time and recognize the 50th anniversary of the Stonewall Uprising. Since its inception in 2000, five WorldPride celebrations have taken place around the world—in Rome, Jerusalem, London, Toronto, and Madrid. This will be the first time that WorldPride has ever been hosted in the United States. Below are several ways hotels are helping guests to celebrate Pride Month across the country this June.

Kimpton Partners With The Trevor Project

Kimpton Hotels & Restaurants is celebrating Pride this year with the brand’s longtime charity partner, The Trevor Project, the world’s largest suicide prevention and crisis intervention organization for LGBTQ young people. Festivities will be hosted at Kimpton properties in three cities—New York, Austin, and Philadelphia—and include a drag brunch event series featuring Willam from A Star is Born and RuPaul’s Drag Race Season 4, with proceeds going toward The Trevor Project.

Regionally, Chicago Kimpton Hotels—The Gray, Hotel Monaco Chicago, and Hotel Allegro, Palomar Chicago—will be the official hotel sponsor of the inaugural Pride in the Park, a Grant Park festival that will take place on June 29, to celebrate the 50th annual Pride Parade. Pride in the Park will be headlined by musical acts including Iggy Azalea and Steve Aoki with charity partners Center on Halsted and Stonewall Sports. 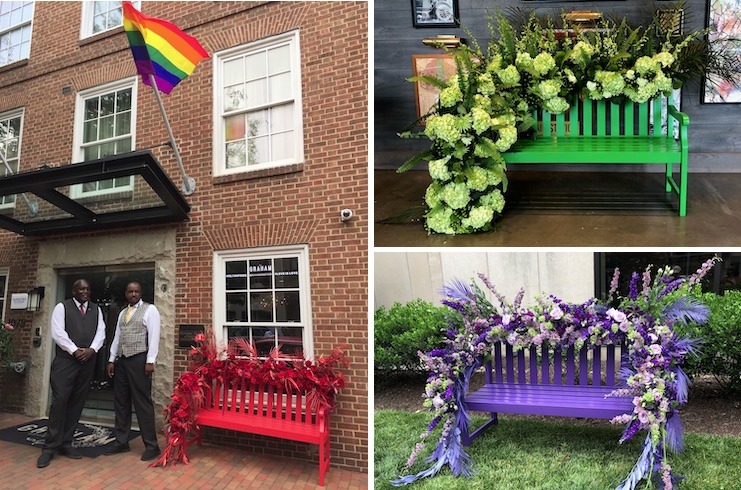 In collaboration with Exactly, the new creative agency from Brightest Young Things, featuring floral artwork by Holley Simmons of She Loves Me, seven area Hilton properties “grew” benches to assemble a rainbow in celebration of DC’s LGBTQ+ community over the course of Capital Pride weekend, June 8-9. Guests who post a photo of all seven benches on Instagram using #HiltonPride are automatically entered to win a one-night stay at a NYC Hilton hotel for WorldPride. 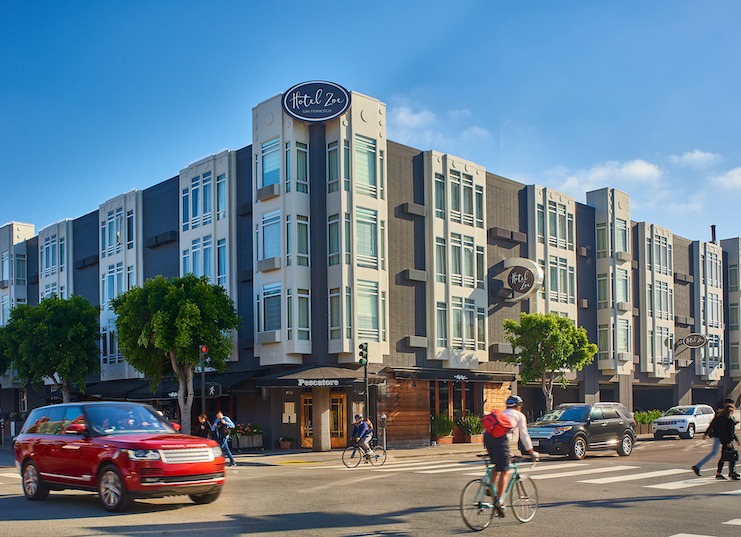 Hotel Zoe in Fisherman’s Wharf is helping guests celebrate this year’s San Francisco Pride—Generations of Resistance—with the debut of their Summer of Pride package. Ten percent of booking proceeds will be donated to the Harvey Milk Foundation, one of San Francisco’s most prominent gay-rights-advocacy groups. The Summer of Pride package includes luxury accommodations, two welcome rosé drinks from Bar Zoe as well as a “Pride Survival Kit,” which includes colorful headbands, wristbands, and festive temporary tattoos. 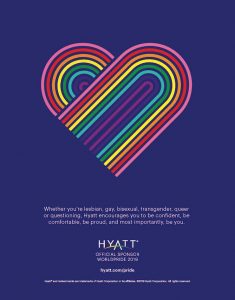 Hyatt, a Platinum Sponsor of WorldPride 2019, has curated several Pride-inspired offerings that are now live on the World of Hyatt FIND platform, an exclusive selection of experiences for World of Hyatt members. These packages include stays at properties like The Beekman hotel and Hotel 50 Bowery along with VIP tickets to Pride events, including the sold-out Pride Island on June 29, Savor Pride, and WorldPride opening and closing ceremonies.

In addition, Andaz 5th Avenue will feature a unique library of books authored by notable LGBT+ authors throughout the month of June, and curated art including a MooMooi by Meredith Wing art installation in the hotel’s Fifth Avenue gallery window depicting a scene from the Pride parade that pays homage to the Stonewall Inn. Park Hyatt New York will have a presentation of artwork by Keith Haring, an iconic America pop culture artist whose career grew from New York City’s 1980s street culture titled, SOURCE: PRIDE. The artwork will be on display in the hotel’s ground-level Avenue Gallery.

Four Seasons Hotel New York Downtown is an official hotel partner and supporter of WorldPride 2019. In celebration of this milestone, the hotel has created a “Be Loud, Be Proud” package to provide exclusive access to the WorldPride Opening Ceremony at Barclays Center on June 26, 2019.