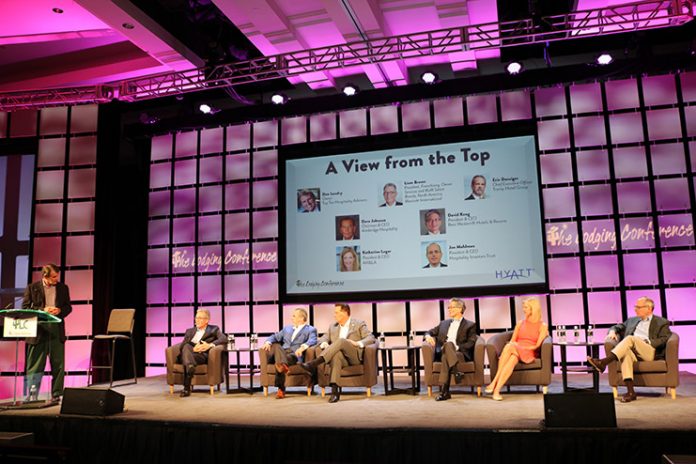 This week, nearly 1,900 leaders representing 900 major brands, management companies, REITs, ownership groups, and those doing business in the hospitality space are gathering at the Arizona Biltmore, A Waldorf Astoria Resort in Phoenix, for the 24th annual Lodging Conference. This year’s is the largest attendance in the conference’s history.

Hoteliers and hospitality leaders expressed an overall positive outlook for the industry, citing low unemployment, tax cuts, GDP growth, record travel numbers, and, generally, a promising economic forecast for the next two years. That optimism was somewhat muted by the challenges that continue to keep industry executives up at night—labor and the rising costs associated, capturing a greater share of inbound international travel, and markets where hotel supply is becoming increasingly saturated.

“What hotel operators are saying is that some markets are strong while other markets are facing challenges. Ultimately, it is still a street-corner business. But for the most part, everybody is very happy right now,” said Harry Javer, founder and producer of The Lodging Conference and president of The Conference Bureau, Inc., during Tuesday’s opening general session. “But how long can it last? In 2019? About 2020? I think that’s the question everybody wants answered at this conference.”

However, demand for lodging is also on an upwards trajectory. Ali Hoyt, senior director, consulting and analytics, STR, said that the revised forecast for 2018 shows that demand and rate growth have exceeded expectations thus far. “Demand growth across the United States is still growing in over 80 percent of U.S. markets,” Hoyt said. That’s particularly the case in the top 25 markets, where demand increased 3.5 percent. “A lot of new supply has also been built in those markets, so occupancy is increasing at about the same pace as those markets outside of the top 25,” Hoyt added.

Chris Ropko, chief financial officer of McNeill Hotel Company, told LODGING that if there is a downturn in the hospitality industry, he expects it will be caused by supply rather than macroeconomic circumstances. “I think it’s going to be constrained to very specific markets. At the end of the day, we’ll be able to manage through it,” Ropko said.

James Hines, chairman of HP Hotels, echoed the sentiment of being prepared to manage through difficult times, no matter when they come. “It’s about like it was last year. The only thing that you keep hearing is something bad’s coming. All the metrics say, ‘no,’ but all the guts and experience say, ‘yes,’” Hines explained. “We’re just proceeding to do our job, make sure our hotels are run properly while everything’s good, and make sure they’re set up at some point when it’s not.”

Ethan Kramer, president at Paramount Hotel Group, told LODGING that he doesn’t see an end of the cycle, but agrees that there is caution in the wind. “The greatest metric that has hurt our industry has been supply, and that’s in check,” Kramer said. “People are still pursuing opportunities.” Kramer adds that the cost of renovations is going up, and when faced with significant PIPs, many owners are choosing to sell, creating opportunities for acquisitions.

“At every conference for the last five years, as soon as the cycle started going up, everyone was talking about how long would it last and and when will it come back down,” Anne Smith, vice president, brand management and design at Choice Hotels International, told LODGING. “As things become harder, how do you continue to generate performance and help owners out?” One of Choice’s answers to that question is the launch of its midscale extension brand, Clarion Pointe—a select-service conversion brand designed to increase value for owners and deliver a high-quality experience for guests at a more affordable price point.

Best Western also introduced two new conversion brands during The Lodging Conference—Sadie and Aiden. The upscale (Sadie) and upper-midscale (Aiden) lifestyle brands will give developers an opportunity to reposition existing properties to improve performance and enhance asset value. For guests, the hotels will take on edgier personalities and that reflect their local areas and offer experiential stays.

Higher construction costs tied to labor shortages may be one of the drivers behind the rise of conversion brands. Labor continues to be at the forefront of hoteliers’ minds—both in terms of costs and in finding and retaining qualified employees. During a panel discussion with top industry executives, many expressed concerns that rising labor costs and a limited labor pool would continue to be huge challenges in 2019 and the future. “Labor is going to be the one thing that hits us hard,” said Dave Johnson, chairman and CEO of Aimbridge Hospitality. “Wage growth was up 2.9 percent in August— that’s the highest it’s been in a long time.”

“I would put an exclamation point and an underline under labor supply,” said Katherine Lugar, president and CEO of the American Hotel & Lodging Association (AHLA). “This is where we really do hope that when Congress comes back and gets into next year, that once again there will be an appetite to take up immigration reform, DACA, H-2B, J-1s, TPS—important issues right on the table where AHLA and the industry bring a really powerful voice.”

Overall, the conference’s atmosphere was bittersweet, particularly considering Lugar’s move later this year from AHLA to her new position as president and CEO of the American Beverage Association. David Kong, president and CEO of Best Western, took a moment to recognize Lugar’s impact on the industry during Tuesday’s general session. “The advocacy efforts and the way that she was able to amplify our voice in Washington is absolutely stunning and amazing,” Kong said.