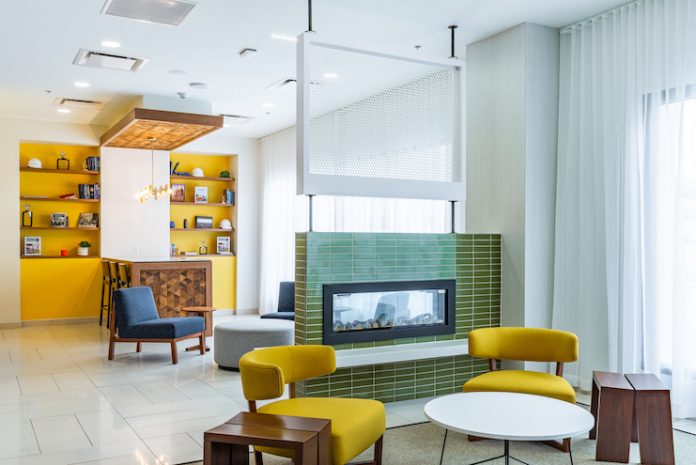 DETROIT — The doors are now open at Hotel Indigo Detroit following a $10 million, two-year transformation to infuse the spirit of Motown and the Motor City into the guest experience, from the upbeat lobby and guestrooms to a new-concept restaurant.

Located at 1020 Washington Street in the heart of downtown Detroit, Hotel Indigo is minutes from Detroit’s main attractions. The newly refreshed property includes 241 renovated guestrooms and more than 1,700 square feet of meeting space with locally inspired decor paying tribute to Detroit’s music history. The updates also pay homage to the original mid-century modern design of the building when it was first opened as a Howard Johnson Motor Lodge in 1966. The new restaurant, The Trolley Room, will open within the hotel at a future date. Hotel Indigo Detroit is managed by Ray Balkey and the Pyramid Hotel Group. Detroit-based Kraemer Design Group provided the architecture, interior design, and furniture specification services for the project.

“Reimagining this space to become a Hotel Indigo is more aligned with the visitors to Detroit today—savvy business travelers, curious adventurers, and people inspired by new experiences—and together with our team of associates, we are pleased and excited to serve these guests and the Detroit community,” Balkey said. “Travel looks different than it has in the past, but our entire team has embraced new protocols and implemented cleaning and distancing standards to welcome guests to our updated property with care, comfort, and hospitality befitting of the Detroit community.”

“Each building in Detroit tells a story and telling the Hotel Indigo story here in our hometown allowed us to bring the city’s history to life in a new way,” said Bob Kraemer, principal and co-founder of Kraemer Design Group. “Detroit’s musical history spans generations and reaches people around the world, and we envisioned a design that would welcome world travelers back to the place where it all began, with fixtures and features that would make them feel truly immersed in Detroit sound, but in a visual way.”

The guestroom headboards, wall sconces, and area rugs are inspired by sound waves, equalizer forms, and musical instruments. The guestroom corridors include abstracted graphics derived from recording studio sound baffles. Behind the front desk, a lit wall panel with lines corresponding to major streets in Detroit maps out the majority of music venues that were open when the building was first built. The first- and second-floor elevator lobby ceilings have a light installation that uses a part of the music score from Aretha Franklin’s “Respect.”

“Collaborating with local artists in the renovation was very important to the ownership and design team on the project,” said Jennifer Dwyer, director of design at Kraemer Design Group. The hotel commissioned permanent local art pieces in the main lobby and restaurant and collaborated with a local gallery, as well. “Sydney G. James created an energetic Motown inspired painting for the lobby and Chad Davis created an abstract mixed material collage/assemblage for the restaurant.”

Hotel Indigo Detroit was previously branded as a Holiday Inn Express & Suites and was acquired in 2018 by Glenmont Capital Management, LLC. The renovations and rebranding of the property were completed through a phased approach that enabled the hotel to remain open as work was done.

Hotel Indigo Detroit has implemented the IHG Way of Clean protocol in response to COVID-19, including deep cleaning with hospital-grade disinfectants and enhanced procedures, including face-covering requirements, installations and means to reduce contact throughout the hotel, measures for social distancing within public spaces, and other policies based on guidance from the city of Detroit and the state of Michigan.

Hotel Indigo Houston at the Galleria Acquired by Driftwood Capital