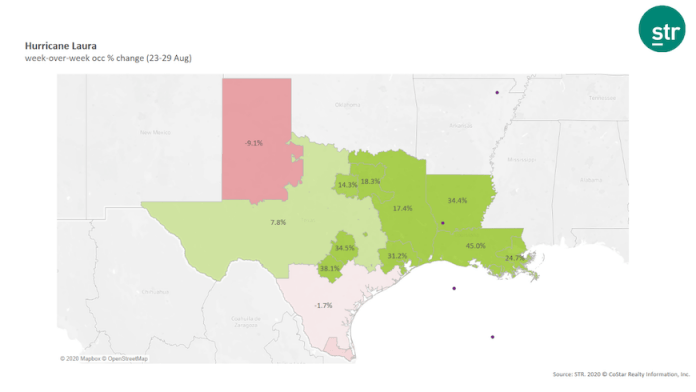 HENDERSONVILLE, Tennessee—Evacuations and displacements due to Hurricane Laura created hotel demand in markets throughout Louisiana and Texas last week, according to a newly released analysis by STR.

As a result of the Category 4 storm, which made landfall in August, 24 people have died, according to a recent report from NBC News, thousands were forced to evacuate, and many remain without power.

During the week of August 23-29, 2020, Louisiana hotel occupancy rose 35.9 percent from the prior week to an absolute level of 55.7 percent. Texas hotel occupancy increased 17 percent to a level of 54.4 percent.

“Different from the past natural disasters that have led to widescale evacuations, Hurricane Laura hit at a time when hotel performance is incredibly low because of the pandemic,” said Jan Freitag, STR’s senior vice president of lodging insights. “Usually with these analyses, we see demand shift geographically from the markets in the path of a storm to evacuation zones. In this case, the trend was simpler with increased hotel demand for most markets because there wasn’t a great deal of business to lose ahead of the storm.”

“We anticipate the Hurricane Laura impact on hotel performance to remain short-term,” Freitag said. “Widespread closures and a massive amount of displacements are what cause a long-term impact. Fortunately, it appears that won’t be the case with this storm.”