Peggy Berg is director of Castell Project, Inc., a 501(c)3 nonprofit organization dedicated to accelerating the careers of women professionals in the hospitality industry. Formed in January 2017, the Castell Project, which will begin its third year in January, operates both the Castell Leadership Program that provides leadership training to rising female executives, and WILL, an ongoing network supporting the career development of women who have completed the program; it also conducts original research on diversity in hospitality industry leadership.

Berg recently spoke to LODGING after the organization’s first Castell Refresh, a supplemental leadership development and resource–building program available only to those women who have already completed the Castell Project program.

Berg says the Refresh program was added because so many women who completed the original program indicated on a questionnaire their interest in getting together to strengthen their network. Its activities included panel discussions, a workshop on leadership agility by Executive Coach Jody Sharlock, and a lecture by Georgia State University Clinical Assistant Professor Beverly Langford, a business communications expert who urged women to own their seat at the table and communicate with grace while commanding respect.

Berg notes particularly that these programs help counter the self-doubt that seems to dog women in business more than their male counterparts. This, she says, was apparent even in high-achieving college juniors and seniors, many of whom experience a kind of confidence gap, such as was described in the book The Confidence Code by Katty Kay and Claire Shipman. “Often because they don’t express it and we don’t expect them to have self-doubt, we don’t notice it or otherwise fail to help them overcome it. Therefore, we need to work to build strength out of this insecurity—especially when it’s being hidden,” says Berg.

She comments that there was some concern by employers that women would leave the companies that supported their candidacy for this program, but found instead that retention was stronger at those companies. “It seems there’s something about the combination of looking inside their companies for advocates and having this resource of women outside the company to offer advice and support that strengthens their careers internally and makes them want to stay and grow with the company that invests in them,” she explains.

Berg says, for all the care taken to create the project, it was nonetheless gratifying to receive positive feedback from participants, such as those featured below. “When you start something new like Castell Project, you think you have all the right pieces in place, but you’re not positive until you see what happens. However, in talking to the women who completed the program and then attended Refresh, it was clear they are stronger and happier professionally and are rising to existing challenges and reaching out for new ones.”

Ewa Kempa, vice president of revenue management at Dellisart LLC, who attended the second Castell Project, admits she was intimidated at first. “I didn’t know if I’d fit in with women who had already accomplished so much in their careers.” To her surprise, she quickly found herself among friends. “Going in, I didn’t expect to meet so many wonderful people. Due to the close relationships we’ve built, I feel like I have my own cheerleading squad that will always support me through anything. Because we are all at different levels in our careers, we compare our current situations and the goals we’re trying to achieve, but can also see our future selves and benefit from the experience of those who are already at higher levels.”

Kempa credits the program with helping her build better relationships with her employees. “I was able to really open my mind more and was better able to not only speak one-on-one, but to listen to everyone and give them a chance to tell ‘their side’ of things.”

She says she also discovered in herself a talent for public speaking. “Since the Castell project, I’ve done some webinars—something I never thought I would do—for a big group of people on revenue management.”

Underlying these strides, and perhaps most important, Kempa says, the program gave her a much-needed confidence boost. “Even if I sometimes doubt myself—I know I’m great at what I do and believe my place in the company is just as important as that of my bosses or any of my male copartners. I’ve made it known that I’m here to stay, and I have a long-term plan for myself.”

Kelsey Bodenstab, vice president of real estate acquisitions at Garrison Investment Group, was also among those in the second session of the Castell Project. Like Kempa, she was impressed by the caliber of the attendees and enjoyed the camaraderie that grew out of their participation. “We had candid conversations about past successes, challenges, and the potential to do business together. The group developed a strong sense of camaraderie and unity that has continued to evolve well beyond the program,” she maintains.

Bodenstab says her key takeaway—“the importance of women lifting each other up and supporting one another”—prompted her to coordinate a “Women in Real Estate” event for students at her alma mater, Lehigh University, to encourage young women to join the school’s real estate program and consider pursuing a career in the industry.

Kristie Dickinson, executive vice president of marketing and business development at CHMWarnick, describes the Castell program as a “holistic” one in which lessons learned transcend the individual training modules. “The program provides targeted training, tactical strategies, a culture of self-awareness, and the opportunity to expand your network to include some of the most intelligent, successful, and supportive women in the hospitality industry,” she describes.

Related to Berg’s comments on the prevalence of self-doubt among women, Dickinson says the program calls attention to many of the deeply ingrained beliefs that can hinder women’s advancement and provides strategies for overcoming these beliefs and otherwise navigating unconscious biases in the workplace. “The Castell program educates women on their relative importance and sphere of influence within the hospitality industry, and it outlines strategies for paving a path for advancement through a combination of self-advocacy, aligning with sponsors, asking for opportunities and saying ‘yes’ to those that come your way,” she says.

Melissa St. John, regional director of operations and general manager at Peachtree Hotel Group, says the confidence she gained as well as leadership and negotiation skills she acquired changed her life as well as her career. “The program stressed the importance of leadership for advancement, and the role-playing and discussion of different leadership styles were really eye-opening for me. Negotiating, I realized, is important in all aspects of life, not just work.”

St. John says the program gave her the perspective and confidence she needed to focus on herself—what she really wanted professionally. “It made me realize that I wasn’t focusing on my own career path, and that my newest position—just a bigger version of the general manager roles I’d held previously—was not what I really wanted. As a result of the program, I changed directions and took on a whole new role. I’m the regional director of operations and I oversee a portfolio right now of over 13 hotels.”

Much like St. John, Susan (Weigel) Guimbellot, vice president of revenue and channel strategy at HVMG, says the daily demands of her job made it difficult to focus on long-term goals. The program she says, impressed upon her the importance of seeing the big picture, being accountable for driving her own career. “The program made me realize how little time I’ve spent thinking about my career and skills. In addition to teaching me some of the skills I need to be more effective, it made me aware of the importance of finding the time to take more ownership and think things through. Whatever it is—networking, public speaking practice, communications skills, broader strategic work—you need to find dedicated time for it and hold yourself accountable to your longer-term grand career plans and goals.”

As a result, she says, she works “more broadly”, making time for networking, asking questions, and supporting others who are asking questions. She also sticks to a plan: “I identify my top three goals for the week and hold myself accountable for moving forward on them. So, whether that’s speaking on panels, participating in brand councils, or just working with vendors to help make suggestions on improvements to systems so things are smarter, it takes time.” 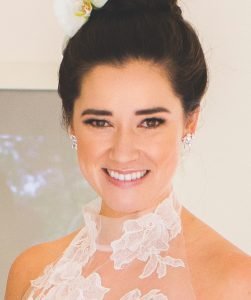 Nala Holmes, vice president at Pyramid Hotel Group, called the quality of both the women selected and the board members who formed the program “a winning formula,” saying, “The board is passionate about advancing women throughout their careers and becoming leaders, and providing a support system and development opportunities along the way; and the participants are serious about finding where they need to improve to reach their goals, while supporting their fellow Castell peers in their aspirations.”

Holmes found it “incredibly energizing to be around these women” and believes “lifting other women up is key to moving the industry forward.” The Castell program, she says, aids the growth of its participants in ways both personal and professional. “It brings together competent, ambitious women—all of whom I feel connected to and know I can lean on for both professional and personal guidance throughout my career. Without Castell, I may have never connected with these talented bright women.”

In light of the response of the participants, Berg says, the first Refresh will not be the last. “They all left there pumped by their new skills and with stronger relationships with each other. And because they all wanted to do it again, we’ll do it again next year,” she says.

Four Tips for Advancing Careers in the Hospitality Industry