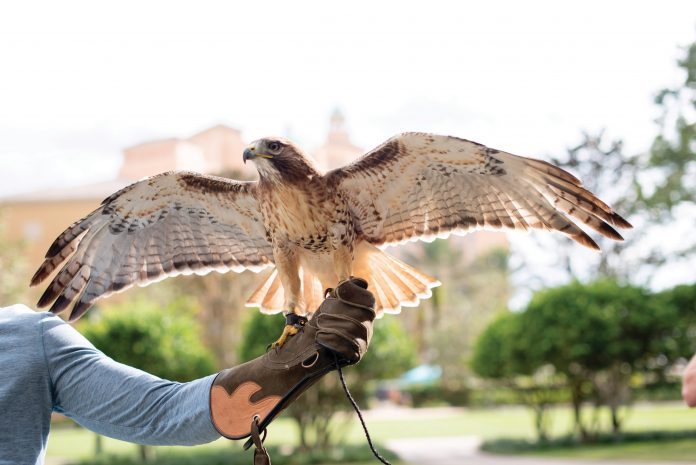 Grande Lakes Orlando, which is made up of The Ritz-Carlton and JW Marriott Orlando, is taking the concept of the experiential hotel stay to new heights. Under the guidance of Master Falconer, Terry Arndt, hotel guests will now be able to participate in the ancient sport of falconry. Describing this program for LODGING, Arndt says falconry, which focuses on the pursuit of wild game in its natural habitat by flying a trained bird of prey, is one of the world’s oldest traditions, one he says is well suited to the natural surroundings of this 500-acre resort.

How and why did the property come to add this most unusual amenity to its sports program?

I had been doing bird abatement work, which is a completely organic way to rid areas such as resorts of birds that have become a nuisance by scaring them away. People who noticed began to ask questions and otherwise express interest. Because I happen to have a permit to run falconry schools, I was asked to form a partnership with the resort to expose its guest to these birds of prey, something that captures people’s imagination and peaks their interest in other types of animal life in Florida.

How are guests made aware of the Falconry program at the Grand Lakes?

Like those who first inspired us to create the program, many are intrigued when they see me flying the birds with the guests who already signed up. But they can also learn about it on the property’s website and its hotel room television channel.

Given that guests are likely inexperienced with handling these wild birds, are there special safety issues?

Falcons are wild animals, and birds of prey can be dangerous, but between how we select the birds based on their behavior, the use of Falconry gauntlets or gloves for protection, and training and supervision to mitigate mishaps, we haven’t yet had an incident. Our objective is to make it as enjoyable as possible, but safety is our highest priority.

How does this enhance guests’ enjoyment of their stay at the hotel?

What the guests get out of participating in falconry is being a part of a 4,000-year-old tradition that’s been passed down through the generations. Falconry has shaped the world in small ways, especially in Europe, which led to its introduction in North America. Except for some newer technology and materials for equipment, nothing has changed. So, when a guest is having a bird fly to them, they’re doing exactly the same thing that their ancestors might have done.

What does it take for other hoteliers to create a program like this?

First, they must have the right environment and a conservation mindset, taking into consideration the well-being of the animals, the plant life, and safety for both humans and birds. They also need a person with the right training and experience to manage the program properly to maximize safety and enjoyment.