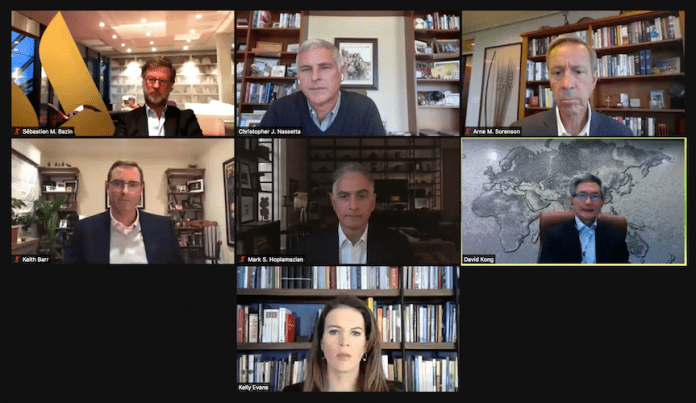 The first installment of the NYU International Hospitality Industry Investment Conference Webinar Series, which is hosted by the NYU School of Professional Studies Jonathan M. Tisch Center of Hospitality, began on Friday with a virtual panel featuring six CEOs of leading hotel companies. Following a virtual welcome from Conference Chair Jonathan M. Tisch, chairman and CEO of Loews Hotels & Co. and co-chairman of the board of Loews Corporation, Kelly Evans, anchor, The Exchange and co-anchor, Power Lunch, CNBC, moderated “The CEOs Check In: The New Norm/An Industry Update.” Below are comments from each of the CEOs, who discussed how the COVID-19 pandemic and the political climate has impacted the travel and tourism industries.

Keith Barr, CEO of IHG, on advocating for industry recovery:

Sébastien M. Bazin, chairman and CEO of Accor, on the U.S. presidential election:

“Seventy-five percent of Americans do not have a passport, so whoever is elected needs to make sure they are making relationships with the European Union so we can get through this together… The relationship between the big guys and small guys has never been more crucial for the industry.”

“The banks are not in the position to lend money to failing small businesses, so many do not qualify for loans. The PPP program provides relief, but in many ways, it’s just a mandate. It’s really not sufficient for our industry. It’s a very expensive undertaking and the loans are huge. The payroll from the PPP is helpful, but it’s really not enough. The recovery is only going to be possible if the industry can survive and the ability to recover is based on governmental help.”

Christopher J. Nassetta, president and CEO of Hilton, on bringing back travel:

“While it is important to have progress on a vaccine, I don’t think it will be enough. We need a massive testing regime so people can assess their own risk and build confidence. We need to think about stimulus in a traditional sense. The health issue has led to an economic issue; certainly, in our industry. How do we provide incentives to get people mobile and moving?”

Arne M. Sorenson, president and CEO of Marriott, on opening the economy:

“Managing a government response to a pandemic is extraordinarily difficult. In the U.S., basically the federal government decided they were going to leave it to the states… Looking forward, the economy is part of this. I’ve been advocating for opening up businesses, but with new cases every day, that’s a hard thing to advocate, but it can be done. I think that’s a step we can begin to take.”

“The need is very acute. There was a survey done [by the AHLA] that reported more than two-thirds of hotel owners in the country said without additional support soon, they will need to lay off more people. We need to get additional assistance to these small business owners; it’s essential for the economy at large and defiantly for our industry.”