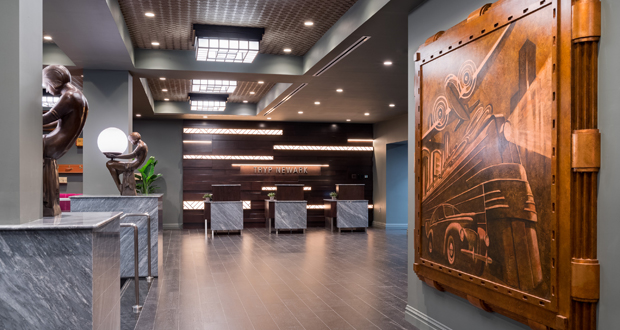 When guests walk in from the street and up the stairs into the lobby of the TRYP by Wyndham Newark Downtown, one of the first things they see is a massive art deco-style copper leaf art installation depicting a plane, train, and automobile. The piece, created by local New Jersey painter Tim Murphy and framed by HGTV’s Shaun Killman, pays homage to the city’s commuter culture and centuries of history.

“The entire property has a transit theme,” notes the hotel’s designer, Blanche Garcia. “And if you look, you’ll see little winks and nods to this history throughout.”

Garcia, a New Jersey-based a lifestyle design expert who served as principal designer on Travel Channel’s Hotel Impossible for five seasons, wove transportation into the hotel’s details, from a cheeky wallpaper in the common areas to a laser-cut grid of the city hung on the wall as art. There are also several vintage suitcases mounted to the wall next to the check-in desk. “This design focus really worked well with the TRYP brand, which caters to travelers,” Garcia says. “And, of course, it’s fun. I don’t think design should be so serious. I think hotels should be full of fun design moments.”

Transit isn’t the only Newark history being honored by the property. Garcia designed the TRYP Newark Downtown as a celebration of all things Newark, from the on-property restaurant, Dutch’s, which was named for a mobster and bootlegger who frequented the building in the 1920s and 1930s, to the enormous murals that grace each elevator landing depicting famous Newark natives like Queen Latifah, Frankie Valli, Whitney Houston, and Shaquille O’Neill.

There’s also a giant acrylic lightbulb in the lobby that honors Thomas Edison. “Because he first exhibited the electric light here in Military Park, which is literally around the corner,” Garcia says.

The 101 guestrooms include historic and locally inspired design details, but Garcia wanted to be sure that these spaces were a little simpler, giving them a loft-like feel. “We still have the art deco influence, like houndstooth rugs and a funky light fixture,” she describes. There’s also a chalkboard-style wall in each guestroom decorated with sayings and callbacks indicative of the hotel’s Newark location. “We have a Thomas Edison quote, ‘What a bright idea!’ And we note exactly how tall Shaq is—7 feet, 1 inch,” Garcia says.

Though the TRYP by Wyndham Newark Downtown has been completely modernized, the hotel occupies a building that was constructed in the 1920s and still contains a number of its original features. Garcia had to be careful during the design process to maintain these historic details, such as the tile floor in Dutch’s restaurant, as well as maintaining the overall layout of the building. “We couldn’t alter the original floorplan, so we had to get creative in how we attract people to certain spaces. And, any repairs we made to the floor in the restaurant had to be noticeable, per the local historical society. It couldn’t be seamless, and we were very purposeful in how we achieved this,” Garcia describes.

She also was creative in how she applied the art deco aesthetic throughout the hotel, using TRYP’s brand touchstones in an inventive and playful way. “For example, I tweaked the wall behind the welcome center to include slanted metal work. It was indicative of the whole art deco era, but still feels very cool and modern. That pattern shows up a lot throughout the hotel and provides great continuity,” Garcia explains.

Overall, Garcia credits the property’s owners with giving her the freedom to explore the design possibilities inherent in the historic building. “We really went above and beyond with this property, and are so proud of the finished product,” she says.

The TRYP by Wyndham Newark Downtown is the sixth TRYP to open in the United States. There are 18 TRYP properties in the pipeline.