Home Design The Rebirth of the Historic Marriott Syracuse Downtown 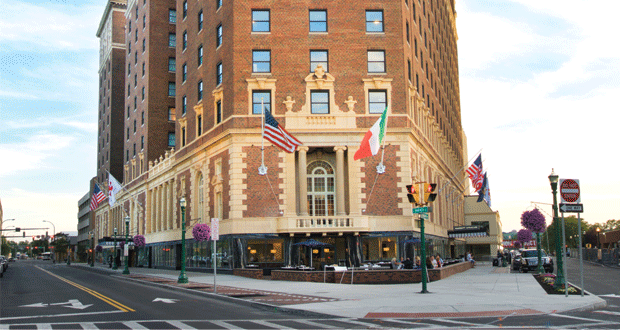 Following a $78 million restoration, the Marriott Syracuse Downtown officially opened its doors to guests on Nov. 1. Part of a city-wide resurgence, the newly renovated property has deep roots in the community, and its owner and developer, Ed Riley, has taken great care to spotlight the hotel’s historic significance.

Built in 1924, the Marriott Syracuse Downtown was originally known as the Hotel Syracuse. A destination for travelers in upstate New York, the hotel often hosted famous guests including John Lennon and Elvis Presley, as well as a number of U.S. presidents. However, the years were not kind to the hotel, and it gradually fell into disrepair, closing its doors in 2004. The property laid vacant until Riley snapped it up in 2014.

After a decade of neglect, restoring the Hotel Syracuse was a massive undertaking. Riley worked tirelessly to fund the project, applying for grants and historic tax credits. He also worked with the state of New York and the city of Syracuse to repurpose grants meant for other projects “They call me ‘The Great Recycler’ around here,” jokes Riley, who left no stone unturned when looking for financing. “Some of [the grants] were for the county, some were for the city, and others were just floating out in space, so I had to gather them all and get them into the basket, and then get the city and the county agree that we were the best team to do it.” The first grant Riley secured was

Though ensuring the Marriott Syracuse Downtown was outfitted to accommodate the modern traveler was important, even more vital was maintaining its history. Riley was meticulous when it came to the historical details and restoring each space in the hotel to its former glory. Lucky for him, no one at the Hotel Syracuse ever threw anything out, and he was able to consult original architectural drawings and old photographs to recreate design elements that had been lost.

Each guestroom also boasts its original door, all of which are rare, historic servidors. Servidors feature a compartment allowed hotel staff to pick up and drop off items without disturbing the guests. Beyond the structural details, many of the hotel’s furnishings are either original pieces that have been restored, or pieces created by local Syracuse companies Harden and Stickley.

It was very important to Riley—and the entire Marriott Syracuse Downtown team—that the hotel make and maintain strong ties to the community. Beyond using local companies for as much of the restorative work as possible, the hotel has forged relationships with several influential entities in the city, such as Visit Syracuse and the Syracuse Oncenter, three-block facility that hosts conventions and events. In fact, the Marriott Syracuse Downtown official headquarters hotel of the Oncenter, which gives the property a leg up when it comes to group business in the city.

As a Syracuse native, Riley considers this two-year project deeply personal. However, he notes that “That wouldn’t have happened without the state of New York, Onondaga County, and the city of Syracuse working together with us and a great development team and a great consulting team,” says Riley. “So while I’m very proud to be the person who was crazy enough to take this on, I am in no way the person who should take the credit for it.”

The Marriott Syracuse Downtown is a 221-room hotel located in Syracuse New York. It is managed my Crescent Hotels & Resorts.