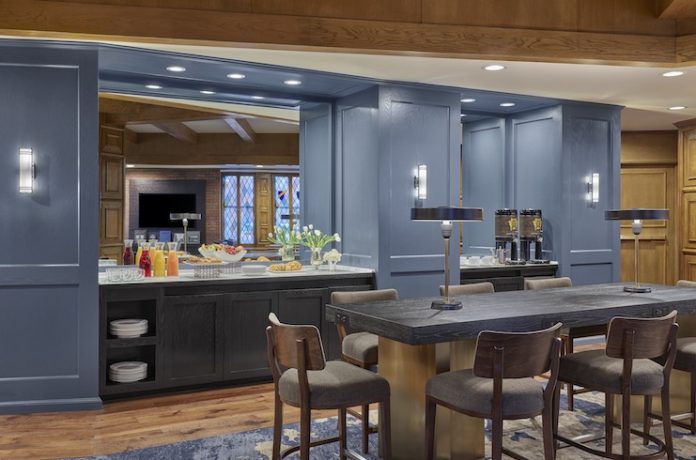 DENVER—The Brown Palace Hotel & Spa in downtown Denver completed a renovation of the hotel’s Top of The Brown Suites including the eighth and ninth floors; the three presidential suites including The Eisenhower, The Reagan, and The Roosevelt; and Palace Arms, various meeting spaces, and the Club Lounge. With the upgrades by Forchielli Glynn, The Brown maintains its status in the city while still fusing historic heritage with modern-day amenities.

“Given the history of The Brown Palace, we knew the importance of preserving the building’s unique character,” said Nick Moschetti, general manager of The Brown Palace Complex. “I am confident we were able to achieve this, upholding the historical elements while ensuring modern day relevance. We are honored and excited to unveil this renovation, and to continue providing the same excellence we’ve shown our guests for the last 129 years.”

The Top of Brown Suites originally debuted in 1937 at the height of the Art Deco era. Today, the style is still embraced but modernized. No two suites are alike, and all 38 keys are located on the upper floors away from the hum of the Atrium below. The guestrooms have new tufted headboards touting columns of drapery and textured upholstery. As a marriage of The Brown’s style and modernity, all Top of The Brown rooms have rounded corners, glass block walls, poured terrazzo flooring, and stepped details on the wood bases and in the hallways with graphics on the entry doors. In addition, each closet features a geometric back wallcovering, reminiscent of a honeycomb, paying homage to the hotel’s rooftop bee colony.

Among the renovated presidential suites, the eighth floor Eisenhower Suite highlights the special connection the late president had with the property, which served as his western campaign headquarters. The tribute wall has letters, photos, and mementos from Eisenhower, decorated in Federal style. The furnishings and additions to the Reagan Suite, on the ninth floor, accentuate the president’s love of the California countryside, mirroring the décor style of his Santa Barbara ranch. The ninth floor Roosevelt Suite has artifacts and furnishings reinforcing the president’s appreciation of big-game, wildlife, and the Great West.

The Brown Palace also recently announced the reopening of the refreshed Palace Arms. With new executive chef Kim Moyle, Palace Arms has a reimagined, “Locally Sourced, Farm Fresh Inspired,” menu, and a new interior. Featuring furniture, lighting, chandeliers, and more, Palace Arms maintained its Napoleonic décor and historic artistry, with the chair upholsteries borrowing from the reds and blues of the Napoleonic era flags. And though the restaurant will maintain the current white-table cloths, the dress code no longer requires a jacket and tie.

Of the 25,000 square feet of meeting space at The Brown Palace, 10 meeting rooms were upgraded with new window treatments, carpeting, and updated lantern-style pendant lighting. The Onyx Room, in particular, has woodwork, onyx walls, chandeliers, and a hand-painted ceiling. A covered walkway with tables, chairs, and views of the hotel’s neighbors leads to The Brown’s additional meeting venues—the second-floor meeting level over Tremont Street—with a grand ballroom and 16 meeting rooms, for a total of 19,453 square feet of space.

The Brown Palace Club Lounge is scheduled to open in early-September. The space has leaded glass windows, oak paneling, and wood-beamed ceilings. The mix of furnishings has leather and tufted upholstery, and lounge groupings are centered around mounted TVs.

The Brown Palace Hotel & Spa is in downtown Denver. Having played host to presidents, celebrities, and royalty for more than 129 years, The Brown is known as one of the city’s oldest businesses. Encompassing 241 guestrooms and presidential suites; six dining options such as Ellyngton’s, Palace Arms, Ship Tavern, and the Afternoon Tea in the Atrium Lobby; more than 20,000 square feet of meeting space and the spa, The Brown Palace is part of Marriott International’s Autograph Collection.

Strategic Moves: How Hospitality M&A Activity and Transactions Are Shaping Up in 2021

Skyline Lodge Guestrooms: A Retreat to the Mountains

Operations Cindy Mannes - December 7, 2021
When staying in a hotel or lodging facility, guests come with the expectation that their room will be clean and pest-free. Due to the...

Development LODGING Staff - December 7, 2021
BATON ROUGE—Element by Westin, part of Marriott International, is set to debut on Wednesday, December 8, 2021, in Baton Rouge, Louisiana, with the opening...