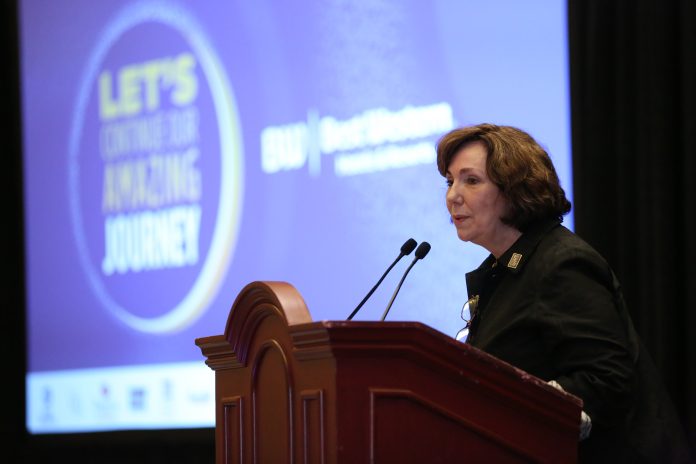 During the first week of October, Best Western Hotels & Resorts’ 2019 North American Conference served as the backdrop for big announcements and brand updates. The company announced a new brand, SureStay Studio, which will play in the premium-economy extended-stay segment. It also updated attendees on how Best Western is working to integrate WorldHotels, which it acquired in February.

But before the general Convention officially kicked off, a smaller contingent of Best Western owners, managers, and team members gathered at the Gaylord National Resort & Convention Center in National Harbor, Md., for the second annual Women in Leadership Forum. The Forum, which was led by Best Western Chief Marketing Officer Dorothy Dowling, was a jam-packed, one-day event where female—and male—hotel professionals could gather to discuss the ongoing challenges facing women in the hotel industry, as well as strategies for moving past those hurdles and achieving success. Dowling noted during her opening remarks that early in her career, she was hesitant to take a stand for women, especially because hospitality is such a male-dominated space. But, she had a change of heart. “As time has passed, I have accepted that I have a responsibility to be part of the conversation, to celebrate women’s achievement, and support the advancement of women,” she told the more than 250 attendees.

Assisting Dowling in moderating the event was Dr. Lalia Rach, a renowned speaker and consultant specializing in creative business solutions. Dr. Rach noted early on that she speaks at many women-focused events, but that Best Western’s stood out to her because it “does not pander.” “We are all different, and that’s what this day is about,” she said. “So what you’re going to hear as we go forward, what it takes for many different people—men or women—to be leaders. There is no one recipe… and regardless of what you face, this day is designed to help you.”

The agenda for the day included interviews with Best Western leadership, including president and CEO David Kong and CFO Mark Straszynski, as well as female developers and international leaders. Keynote speakers were a Disney executive and a Second City-trained improv master. Women with deep experience in the hotel industry spoke about issues important to them.

Kong, who was interviewed by Dowling, said, “Diversity is really important. You want to find people with different skillsets, knowledge, and background because they will help you and complement your skills. and when you have a very diverse group working together, you can actually harness that and turn it into a very powerful force.”

Disney’s Jane Gould, senior vice president of consumer insights and programming strategy for Disney Channels Worldwide, who has an area of expertise is in how young girls see the world, spoke at length about how she and her team develop programming that lives up to the values held by this supremely empathetic and driven demographic.

After a very full day of programming, Dowling and Rach sat down with LODGING to discuss the event and why it’s so necessary in today’s hospitality environment. Here’s what they had to say.

This was the second year of Best Western’s Women’s Forum. What prompted you to start it last year and what made you say, “We have to do this again”?

Dorothy Dowling (DD): I do fundamentally believe that it’s a responsibility of people who have achieved success to pave the way forward. And I also think our industry needs that voice and needs to really be focused in terms of building that diversity bridge. So that was really the stimulus at the beginning.

Then, last year, we were the second-highest-rated session at the Conference. But it wasn’t just the scores. Throughout the year, many women reached out to me—via email or over the phone, and one even in person at a subsequent meeting—and they all spoke of how there had been some kind of transformational outcome as a result of attending the Forum. They put their hand up for an opportunity in their workplace or in their communities, or they were able to navigate challenges a little bit differently. They became more self-aware and more able to lean in.

Also, I feel a responsibility to continue. I mentioned during the Forum that I had met a young woman who has been very successful in her career, but didn’t want to be a poster child for women in lodging. I completely understand, but she’s much younger and I do think when you get older, you get a little more comfortable about taking some risks and standing up for things that you believe in. I suspect that someday she may be there, too.

Why are events like this important in the hotel industry?

Dr. Lalia Rach (LR): I think that one of the things that this industry has to own up to is the fact that it is 2019 and it is still way behind in terms of female representation. If we take this young woman as an example, she didn’t have enough role models. And I know the industry is very proud of the fact that more women are in positions of power, but at the rate the industry goes, it will still be a long time before there’s parity. And while it pains me that we have to have events like the Women’s Forum, to be frank with you, it is absolutely the right thing to do.

Additionally, I think that other brands should really consult with Best Western about events like this one. Dorothy has built something special and she’s going to have to do it again next year because she doesn’t have a choice. She has an audience that is vocal about the Forum’s impact and it will keep growing. I also think that it has to be recognized that what Dorothy and her colleagues have created is extremely unique and much-needed in this industry.

What about the program was new this year? What carried over from 2018?

DD: Well, I think it’s a challenge because you’re always trying to balance the practical with the inspirational. I think both are important. But we always try to focus on certain pillars, like learning about sales and learning financial skills. These are just essential. I always tell people, if you can’t put the numbers on the score card, it doesn’t matter, you’re never going to move your career forward. And then there’s the element of people leadership because those are skills that we all need to own when building our career credentials.

We also wanted to take this Forum as an opportunity to lean on our partners and see what they can teach us. So AAA sponsors the event, which of course allows us to fund some of the elements, but also gives us access some of their senior women, who can elevate everyone in terms of knowledge and spirit.

How have women’s role in business changed in recent years?

LR: Well, I think the first thing you have to look at is how society has changed. It also depends on how, and where, you were raised. And by that I mean women before me were raised to be direct and assertive and their own person. Now it may not have been as many women, it may not have been recognized, but this is not a new thing. What’s really changed, though, is the world around us. We have access to instantaneous knowledge that is global in nature, which is something no one before us ever had. Now, more women are more educated, more women are lawyers, in MBA programs, in the medical professions—all those things trickle down.

I have a niece who’s just a year and a half old and we now live in a world where she can be anything. I always thought I could be anything, but I also knew on some level that it probably wasn’t true. I didn’t let that dominate me, though. Whereas with my niece, she can truly be anything. That’s now universal, and that is a result of that trickle down.

I also think that men are being forced to recognize that women should be more involved in business. And I do use that word, “force,” intentionally. They have no choice. That said, do I think it’s easier for women today? No, I don’t. But I think some things that were difficult when I was younger are not anymore, and other things have replaced them.

Read more from this interview here.