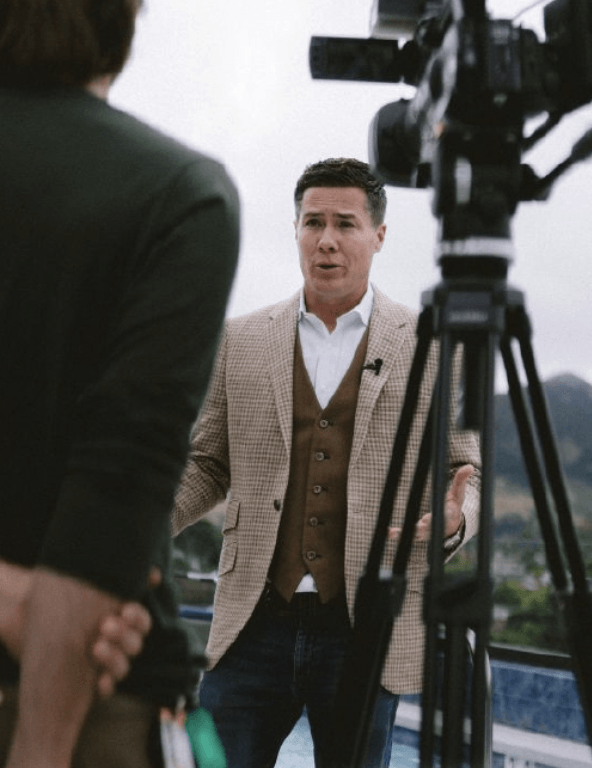 Andrew Firestone’s career has been interesting, to say the least. He started building his hospitality skills at a select-service chain during his college years, where he did everything from manning the front desk to touching up paint jobs. Post-college, he worked for a corporate investment bank and various hospitality companies, including Ty Warner Hotels and Resorts and West Coast Management. He was even a “Bachelor” on ABC’s reality television show in 2003. Most recently, he and his business partner founded—and are principals of—StonePark Capital, a development company based in Santa Barbara, California.

Firestone admits that people sometimes recognize him from his short-lived television career, but is quick to add that his stint as a TV bachelor never seriously impacted his hospitality ambitions—although sometimes fans of the show staying on-property ask employees if he’s there. “Doing the show was never a hindrance because I’ve always been in the hospitality business. I was always doing my projects and trying to be entrepreneurial,” he says.

Currently, StonePark’s portfolio includes two La Quinta by Wyndham hotels—one in Santa Barbara and another in Morgan Hill, California—with two more, as well as an independent hotel in the pipeline. “I have a very strong allegiance to La Quinta,” Firestone describes. “They were the ones who believed in us when we were working on our first property, and working with the brand has been such a great experience.”

Firestone notes that their company was one of the first developers to implement the brand’s Del Sol prototype. “That was in our Morgan Hill property,” he says. “And the property has been great so far—showing its ability to compete with other brands.” He adds that StonePark’s success with the La Quinta brand has given his team the confidence to build in California locations with a high barriers to entry, like San Luis Obispo and Sonoma.

Due to StonePark’s positive experience with La Quinta-branded properties, when it was announced that Wyndham Hotels & Resorts was acquiring the brand in January of 2018, Firestone was initially a little apprehensive. “I’d be lying if I said there wasn’t some trepidation when we first got wind that an acquisition was happening,” Firestone says. “Further, there wasn’t much information with the first announcement. I had a lot of questions.” So, as a self-described “roll up [his] shirt sleeves” type of businessman, Firestone found a way to contact Geoff Ballotti, Wyndham’s president and CEO, to speak about the company’s plans. When Firestone got in touch, Ballotti and the Wyndham team was extremely open about the acquisition, sharing information that gave him confidence that his hotels would continue to flourish.

Since the acquisition, Firestone is still heavily invested in the La Quinta brand, serving on its brand council and ensuring feedback from hoteliers reaches Wyndham executives. “So far, my experience with the Wyndham transition has been great. The company has been incredibly responsive and receptive to the brand council’s suggestions. There’s always going to be areas that need improvement, and we’re committed to improving them.”

He continues, “That’s why I have my heart, soul, and bank account invested in this product and development. You want to know how valuable you are to the company, and not just in a dollar sense. You want to see that they are willing to invest their time in the future of the brand.”

Now, Firestone is looking to continue StonePark’s ascent in the hospitality space. “We’re delivering the projects that we’ve done so far and hope that continues. We believe in every aspect of the deal: the market, the product, and the conditions. All of those fit into what we’re trying to accomplish. If we’re able to stay true to all those particulars, we’ll be successful in the future,” he says.

Furthermore, unlike much of the industry, Firestone has minimal worries about the future of the markets in which he is operating. He’s confident that as new supply moves into California, his hotels will continue to be successful. “There was a lot of new development for a while and there’s still a lot of new product coming in. Competition is always worrisome to a certain extent, but, luckily, I sleep pretty well at night knowing our hotels are positioned for success.”

He adds that his favorite part of the hospitality industry is watching guests come into his hotel and enjoy their stay. He says, “Each person that comes through our doors is there for a different reason. Somehow, we’re part of their story; whether they recognize it or not, we are there. Of course, I love building. I love the process. But for me, it’s interacting with guests and providing them with great experiences that is the most satisfying.”