On top of hosting its usual guests last June, Fontainebleau Miami Beach welcomed production crews to the property, accommodating filming in the hotel’s lobby for season three of The Amazon Original series The Marvelous Mrs. Maisel. Fontainebleau worked closely with the series’ production team and Amazon Prime to retrofit the lobby to match the mid-century era in which the show takes place, even dressing cast members in vintage Fontainebleau uniforms.

This wasn’t Fontainebleau’s first rodeo; since first opening in 1954, the luxury hotel has set the scene for a range of productions, from the 1964 James Bond film Goldfinger and the 1983 crime drama Scarface to the 1992 romantic thriller The Bodyguard and an episode of the 2000s hit show The Sopranos.

Fontainebleau’s lobby plays a starring role in season three, episode five of The Marvelous Mrs. Maisel, which follows the story of Miriam “Midge” Maisel, played by Rachel Brosnahan, a New York City housewife who dives into the world of early 1960s stand-up comedy. In season three, Midge goes on tour, making a stop at Fontainebleau Miami Beach, where she can be seen strolling across the lobby and walking down the hotel’s iconic Stairway to Nowhere.

Philip Goldfarb, president and chief operating officer of Fontainebleau Miami Beach, said that the production team approached the property about a year before filming took place, following up with several site visits and a full day of research in the hotel’s historical archives comparing modern photos and layouts with images from the 1960s. “We have a wealth of historical information and old images of the hotel and lobby that we shared with the team, as well as all of our old vintage logos for use throughout the show,” Goldfarb said. “The team was extremely through with their research and approach.”

Filming took place in the hotel’s historic lobby over the course of four days: a day and a half of prep work setting the scene, two days of shooting, and a half-day spent breaking it all down. Additional filming took place at Fontainebleau’s main drive as Midge arrives on property. “The production design team did an amazing job of bringing the set to life,” Goldfarb said. “My favorite part was seeing all of the small details they were able to reproduce. The team made sure every single detail was accurate, including everything from the employee uniforms to the vintage bars to the brochures Midge is seen holding.” 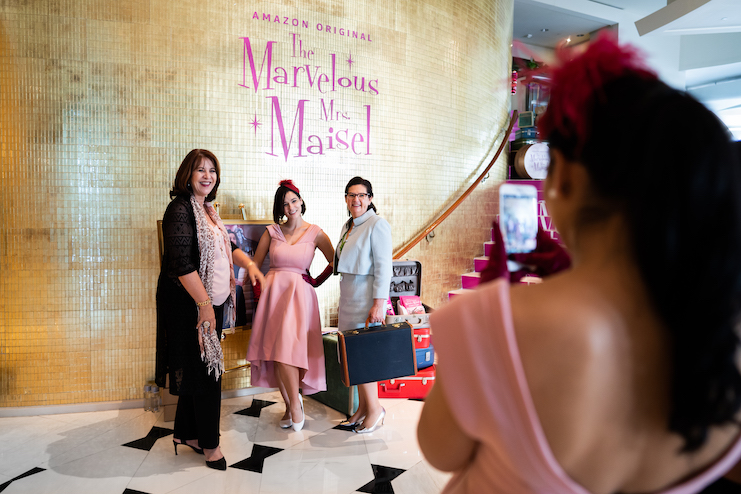 Because the lobby is the hotel’s hub connecting every part of the property, Goldfarb said that accommodating both production and guest needs was a challenge. “We’re running a 1,600-room property while filming, so we worked closely with the production team to ensure that all of our guests could enjoy the property to its fullest extent. It was a very collaborative project between all our teams to make sure everything went off without a hitch, with several large meetings with the operations team so that everyone knew what to expect,” Goldfarb explained.

For instance, the property needed to ensure that guests did not interact with the extras on set dressed in period clothing, so hotel staff re-routed some pathways to avoid interrupting filming. “The production brought a lot of excitement to the hotel, and guests often stopped to watch what was going on when they could. It was a bit of a challenge to keep guests from getting too involved when filming was occurring, but overall it was a one-of-a-kind experience that would only be available to them at a resort like Fontainebleau Miami Beach,” Goldfarb said. “We had dedicated team members on hand at all times to make sure that guests’ needs were met just as they would be on any normal day.”

Fontainebleau leveraged its cameo appearance with themed packages and promotions inspired by the show, which the property marketed to guests throughout the month of December to celebrate the season premiere. The limited-time programming included social media photo ops, a ‘Marvelous Hour’ at the hotel’s Bleau Bar, cocktails named after characters, show-themed gifts for purchase at Bleau Signature, and more.

Goldfarb added that out of Fontainebleau Miami Beach’s extensive repertoire, this role stands out because the hotel plays itself—a destination and an icon. “It was very special to see what Fontainebleau looked like back in the early 1960s and imagining what it was like to visit the property during such an important time in its history.”